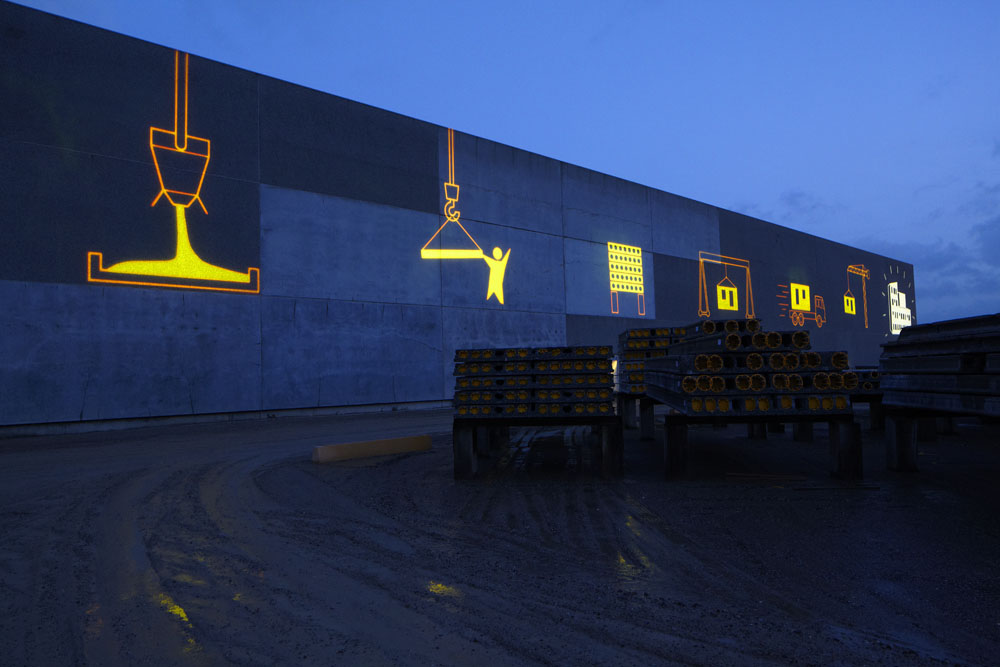 A Concrete Idea Comes to Light for Boligbeton in Denmark

Boligbeton sought to refresh their image and used their location next to the busy E45 highway as an opportunity to do just that. The company wanted to give drivers a more positive experience rather than the mundane sight of a yard full of concrete elements and consequently turned to architectural design firm Pluskontoret Arkitekter for some fresh ideas.

"Over 30,000 vehicles pass Boligbeton on the E45 daily, which gives the company great exposure,” states Suna Cenholt, architect and partner in Pluskontoret Arkitekter. “Our mandate was to assist Boligbeton to rethink its face out to the motorway. It’s really their shop window and has great potential for branding."

Façade illumination
Boligbeton treated the yard out to the highway more like a backyard, a somewhat messy, monotone area with little visual appeal. The bland stacks of gray concrete belied the company’s image however as Boligbeton is a dynamic player in what is actually a high-tech industry.

Pluskontoret held an internal idea workshop in which a number of ideas were proposed to improve the yard’s aesthetics - reorganization of the yard and more colorful landscaping for example. It was the proposal of an illumination scheme onto the 140-meter long by 11-meter high façade that was the key factor however.

Storytelling in 6.5 seconds
Architect Daniel Olsen from Pluskontoret’s design team was already familiar with Martin and the possibilities that a dynamic illumination scheme could offer and consequently contacted Martin Scandinavia about a solution.

”We wanted a simple and fun way to tell the Boligbeton production story, all the way from the open pit and element molding to transport and the finished project,” Suna explains. “Vehicles pass by the facade at 130 km/hr so in order to facilitate understanding we chose a mixture of cartoon graphics and pictograms.”

Project Sales Manager at Martin Scandinavia, Anders Birch, had the ideal solution in mind, Martin’s fully-weatherproofed Exterior 400 Image Projector™. He comments, “With an IP65 rating and its ability to integrate custom graphics into outdoor lighting designs, the Exterior 400 IP was the obvious choice for this project. Not only can it handle the dusty environment and exposure to the elements, there is no other outdoor LED image projector on the market that can match its power.”

After consultations with Boligbeton and a series of on-site demonstrations organized by Martin Scandinavia, the Exterior 400 Image Projector was chosen for the project.
Pluskontoret use 10 of the outdoor luminaires to tell the Boligbeton story with each fixture projecting a custom-designed, static graphic onto the concrete façade.

The Exteriors are mounted across four 4-meter tall masts at approximately 36 meters from the façade. Four fixtures project graphics straight onto the façade while six fixtures house distortion calculation graphics to compensate for angled projection. At approximately 6.5 seconds per drive-by, it takes several drive-bys to ‘read’ the entire 10-picture story.

The lighting system is both dynamic and flexible and allows the company to project a different expression using new graphics and new story if they wish. Besides the Boligbeton story graphics, the fixtures can also spell out Boligbeton in text across the façade.

Tough environment
The Exterior image projectors are in a very aggressive environment characterized by strong winds, rain and dust. “We tested several products but the Exterior 400 Image Projector’s high IP rating made the difference,” Suna comments. “It was important for us to find a durable product that does not require any special maintenance. In addition, the LED technology in the Exterior 400 IP saves on power, which is also of great importance. Finally, the possibility to control the lamp from a PC was also an advantage.”

The façade lighting scheme is controlled via a PC-based Martin M-PC™ control package with touchscreen interface. The network solution allows personnel to log on and control the lighting remotely from the Boligbeton building, from an office 500 meters away or anywhere.

The outcome has transformed the yard and drivers’ experience of Boligbeton dramatically. “We are very pleased with the result,” says Linette Helbo Jensen, Product Manager at Boligbeton. “The illumination has received a lot of positive feedback and provides a good experience for the many drivers along the highway.”

Suna concludes, “We are pleased with the project and were happy to have collaborated with Martin. They came up with good suggestions in both the design and planning phase and were good to cooperate with through to realization.”