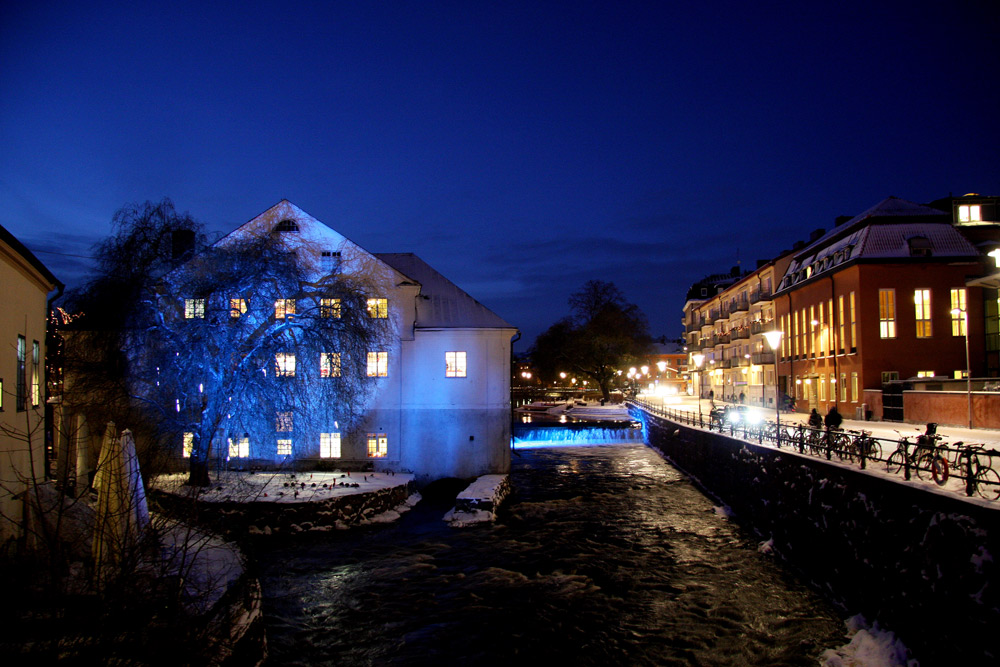 In 2008 a new lighting event took place in Uppsala, Sweden in which various objects around the city - buildings, statues and trees - were illuminated by different lighting designers and architects.

A guided tour of 4 km was created to view the lighting installations, an event that took great care in promoting the city after dark. The event also promoted public health by getting people out at night to walk around and experience the town in a different light.

As the project was greatly appreciated and was a huge success, the Uppsala Municipality decided to make the event a biennial celebration, therefore reoccurring in 2010.

One of the key sites of 2010 was the old mill in Uppsala’s city center and the water surrounding it. Sound, light and video company Kreativ Teknik of Uppsala took it upon themselves to create and transform the area into a dynamic colored adventure with music and sound effects. With a theme of “The Four Seasons,” the site transformed from winter through spring and summer to autumn, all to the music of Antonio Vivaldi in a seven-minute, preprogrammed, automated show.

Trees, water, facade, grass and a small waterfall were lit by LED lighting and Martin Exterior series fixtures including Exterior 200s™, Exterior 600s™ and Exterior 1200 Image Projectors™. The 150 W Exterior 200s were mounted inside the mill, illuminating the passing water, with the 575 W Exterior 600s lighting up the waterfall and surrounding water. The 1200 W Exterior 1200s were used to wash the facade, as well as to project flower gobos and create a burning fire at the end of the autumn portion.

The entire show was programmed and timecoded on a Martin Maxxyz™ lighting console and later saved to a showstore in order to be fully automated from 16.00 – 24.00 every evening. The lighting event ran from the 29th of October to the 29th of November.