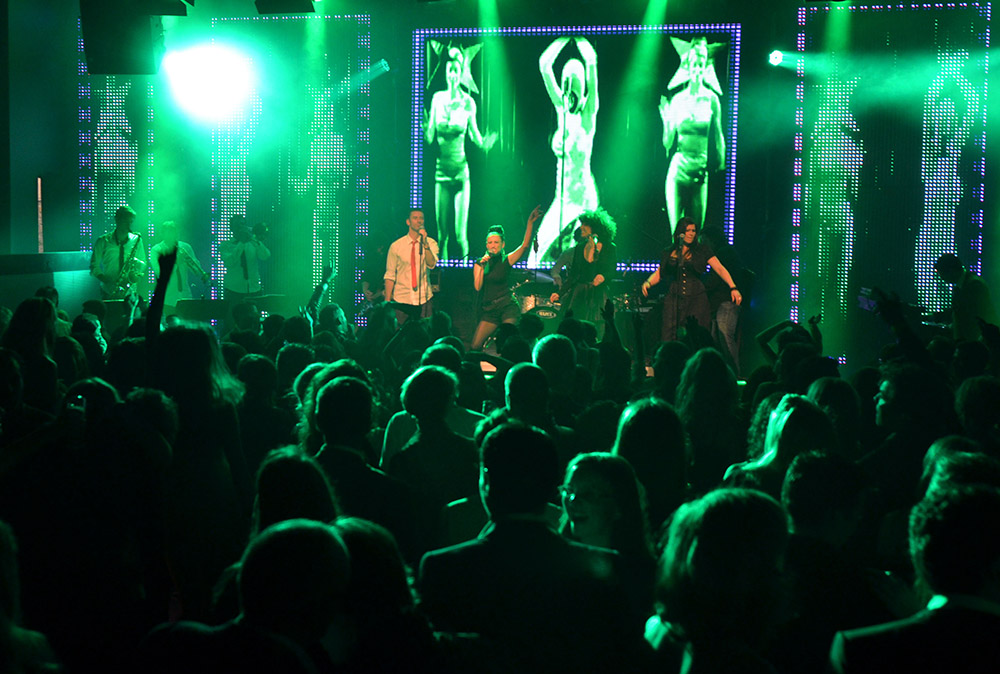 All Martin at Prestigious Gibson Club in Frankfurt

Madjid wanted style to define the downtown Frankfurt venue while honoring the building’s original charm and existing architecture, and the result has been a great success.

After visiting the Martin Professional booth at Prolight + Sound 2011 in Frankfurt “he left the booth with the impression that he had not only found the right products, but also the right partner to fulfill his vision,” said Martin Germany’s Stefan Wagner, who oversaw the lighting and visual installation at GIBSON.

Martin LED video takes center stage
The brief for the new lighting system called for it to be outstanding, breathtaking, multifunctional (to cover both the club and live performance needs), easy to use, affordable and LED only.

“Controlled via the P3, you can arrange both LED systems to create one big screen with one picture over all of the panels,” Stefan says. “Then you also have the option of showing one thing on the EC-10 screen and something different on the LC frame.”

Martin LED rig
Comprising only LED fixtures and simple to operate, a multifunctional lighting rig gives an outstanding light show. Two circular truss structures, as well as four crescent-shaped truss structures, are mounted on the ceiling overlooking the dance floor. A third section of truss sits above the front of the stage, while the back of the stage provides the final mounting point for the lighting fixtures. A total of 40 Martin MAC 101 compact moving heads, 18 MAC 350 Entour LED fixtures and 22 MAC Aura wash lights are configured on the trusses.

Stefan said, “The MAC 101’s are perfect beam lights that create stunning effects not only from the different positions on the ceiling, but also from their position on stage, they create a fast and bright wash effect in between the LED panels.”

“The MAC 350’s are used for all the gobo projections and the profile tasks on stage and on the dance floor,” Stefan continues. “With its 50,000-hour LED-lifespan and its 8,000 lumen output it is the perfect solution for a club, and there is no need to clean the fixtures because no air can get inside.”

Regarding the award-winning MAC Auras, he stated, “The MAC Aura’s bright output, aura effects and great zoom level made it perfect to handle all the wash tasks in the club, besides its job of creating stunning lighting effects.”

Alongside the Martin P3-100 video signal processing and distribution unit that takes control of the LED screen, Gibson is equipped with a Martin M1 console and a Martin Maxedia Broadcast unit for media composing and playback. Together these three control elements fully integrate the lighting and visual technology, and provide an easy to use, simple to operate system ideal for either live or club environments.