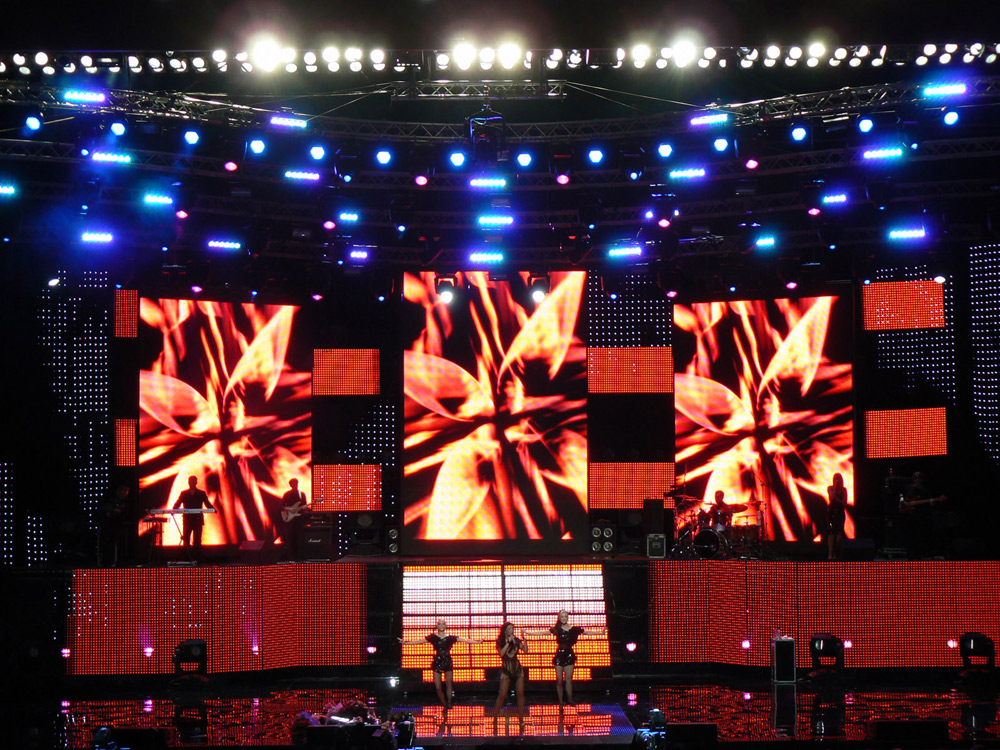 One of the best live shows of 2010 in Ukraine was a performance by Eurovision 2008 runner-up Ani Lorak who played Ukraine’s largest concert hall beneath a Martin rig supplied by leading Ukraine rental company Gali-Leo.

The set up, designed by Nik Vishnevetsky, was based on curved trussing and LED luminaries, including Martin Stagebar LED pixel bar/wash luminaires, and Martin MAC 301 Wash LED moving heads.

Lighting designer Dimitri Pruidze of Gali-Leo used the StageBar 54L™ LED battens to reveal the set’s curved rigging. The pixel bar luminaires also played an important role in the show’s video design with LED screen effects and color pixelmapped across them with the help of a Martin Maxedia PRO media server.

Downstage, a curved truss with Martin MAC 301 Washes continued the show’s ‘wave’ design and concept while fast moving MAC 301s fit the concept perfectly with color effects that were easy to program via the fixture’s RGB color mixing system.

The color wash base for both stage and audience was provided by Martin MAC 2000 Washes working with other fixtures to produce an ideal on-camera visual image. During the applause, Pruidze had the audience-directed MAC 2000 Washes change to a warm 3600K.

MAC 2000 Profiles, based at the curves of the stage, provided gobo patterns for the musicians and as floor projection. Pruidze used MAC 600s and MAC 500s as floor lights, the MAC 600s positioned behind the transparent LED screen with the rest used as sidelights together with the MAC 500s.

All of the lights were controlled from one Martin Maxxyz lighting console with two additional Wing panels. Preprogramming was done the night before the show by Gali-Leo and synchronized with the video design.