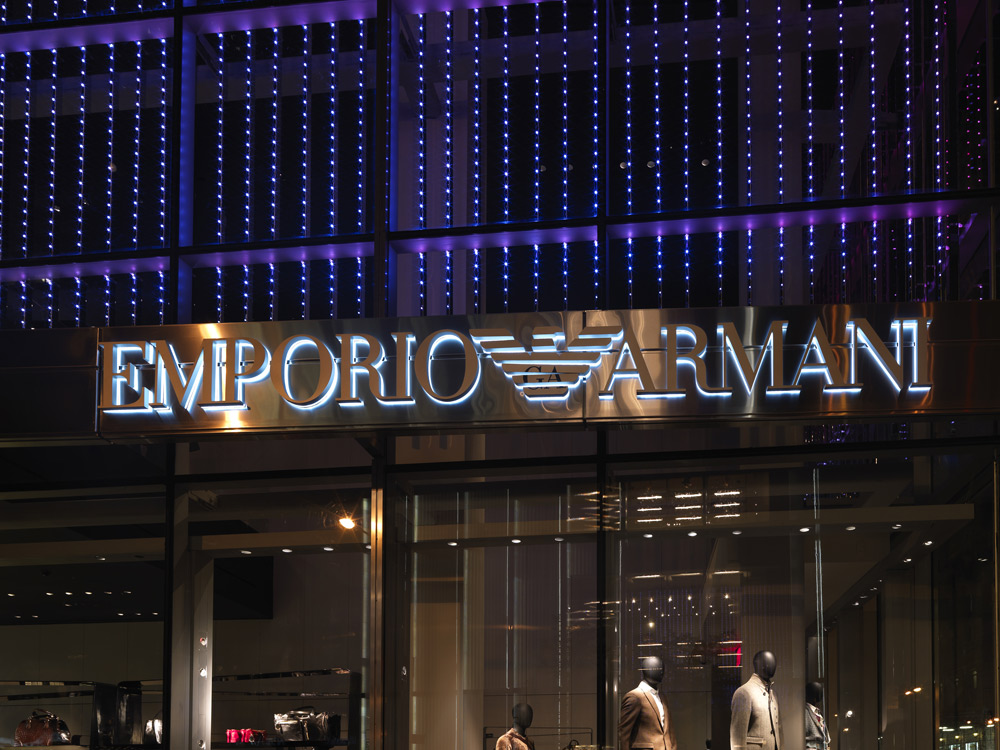 Giorgio Armani’s newest flagship store on New York’s 5th Avenue has been wrapped in a custom Martin LED display designed by design firm Speirs and Major Associates (SaMA). The four-floor glass box store is located on the corner of Fifth Avenue and 56th Street in the heart of the shopping district, prime space for a flagship architectural fashion store.

Speirs and Major Associates
Speirs and Major have worked on other Armani flagship stores, notably Armani Store Ginza in Tokyo. “The Tokyo and New York stores are very much about the impression of the Armani brand through an architectural form,” states SaMA Director Keith Bradshaw. “On Fifth Avenue we developed the idea of wrapping the glass box in an LED screen, effectively extending the impact of the store out onto the street.” The animated facade is double-sided and is visible from inside the store at the restaurant level.

Transparency
To maximize the eye-catching effect of ubiquitous lit mannequins in the store’s windows, SaMA found a discreet visual solution by laying a low resolution LED screen around the top three floors of the space, playing with the idea of transparency.

“The benefit of a low resolution screen means there is transparency so we draw the eye through the glazing into the store by day and at night we bring the face of the building to light,” Bradshaw explains. “In that way it acts like a type of theatre scrim with a foreground and background.”

Not just another LED screen
The project required a custom solution and SaMA were looking for a company that was not only good at LED screens but also had a good sense of product design and found it in Martin Professional.

“The company had to be able to handle LED, control of LED and custom mounting. And the product had to be beautiful as people can view it close up when they are in the store and restaurant,” states Bradshaw. “It had to hang true with precise coordination of the joints and not a lot of circuit boards that people could see. We didn’t want to do just another LED screen.”

Spacing
The LED bars had to be exactingly placed among an already existing mullion structure of steel and supports. Spacing across the facade varies with approximately 200 mm between each bar at the street corner with progressively wider spacing at each end. LED spacing on each bar is 100 mm.

“The reason we extended the spacing at the ends, especially down 56th Ave, is that Armani wanted to show ownership of the space - very important in this part of New York,” Bradshaw explains.

As the image drifts toward the lower resolution ends, it becomes more abstract. “We really had to get the resolution right in order to get that sense of abstract movement on it.”

Viewing angle
SaMA wanted the screen to have a broad viewing angle so that passersby, whether in a passing taxi or walking from nearby Central Park, could understand the image from different viewing angles, not just straight on.

The solution was a rounded custom LED bar developed between SaMA and Martin, something that Bradshaw describes as a “beautiful piece of industrial design” that allows for a wide 150 degree symmetrical viewing angle. Each bar, only supported vertically, is hung to fit in with the varying mullion structure while maintaining the good viewing angles of the imagery.

Art screen
When considering media content SaMA had several factors to keep in mind, including a tight planning restriction on Fifth Avenue that limits lit brand signage to only 20 square feet.

The Armani LED display was never meant to be a brand screen. Bradshaw calls it “more of an art screen than a media screen – more enigmatic than branding.”

Content floats across the screen, intensity and speed of the animation balanced with the impact. It is delivered to the screen from a Martin Maxedia Compact Rackmount™ media server, operated through a Martin Maxxyz PC™ lighting controller. The LED display runs at about 20 percent of brightness at night and 80 percent during the day.

The Armani /5th Avenue store opened in February 2009 with the animated façade finalized in summer 2009.