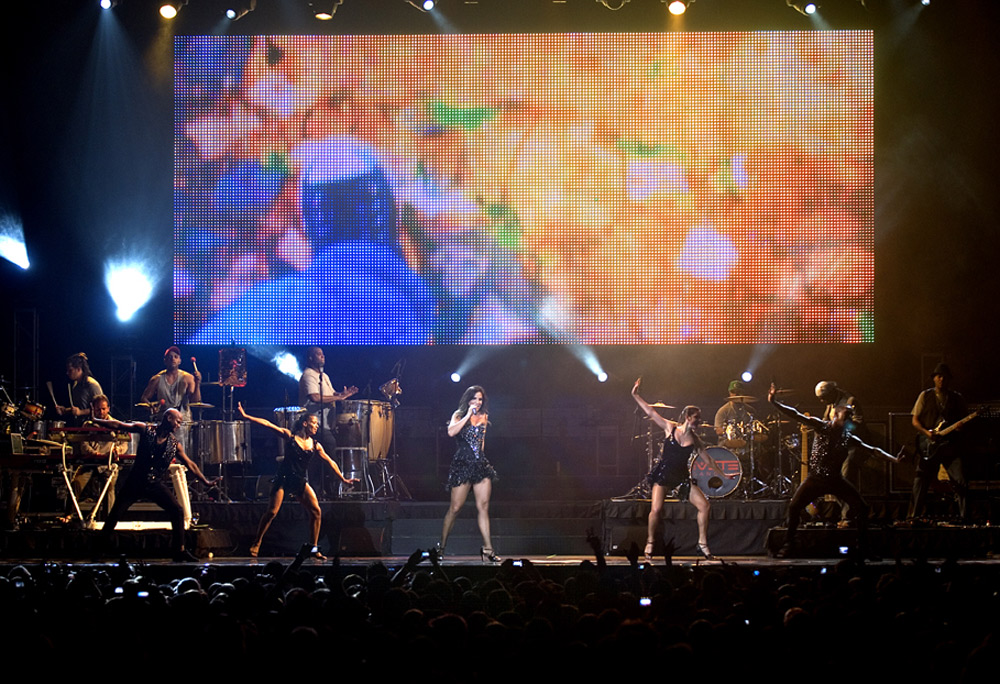 Charismatic Brazilian pop star and Latin Grammy Award-winner Ivete Sangalo kicked off a string of US dates at Miami's American Airlines Arena on August 28th. The artist, who performed beneath a Beachsound-supplied rig of Martin MAC luminaires and backdrop Martin LC Series LED screen, is one of the most popular Brazilian singers, having sold over 12 million albums worldwide.

Beachsound, celebrating their 15th anniversary this year, is a Martin dealer with an impressive inventory of entertainment production gear. No stranger to big time live performance, they have supplied big shows for artists like Gloria Estefan, Marc Anthony, James Blunt, Paulina Rubio and many others.

“When we got the call to do the first concert in the US for one of the most popular and best-selling Brazilian female artists, we were excited,” stated Beachsound Operations Manager and event Crew Chief Juan Ugas. “We proposed a Martin rig of 20 MAC 2000 Washes™, 28 MAC 2000 Profiles™, 11 Atomic 3000™ strobes, and 18 LC Series™ 2140 LED panels with a P3-100™ processor.”

LC Series simplicity
Brilliant graphics across a large LC Series LED backdrop provided unmistakable visual impact to the high energy show. The semi-transparent, lightweight panels feature a simple mounting system and easy daisy-chaining that make set up a fast process, especially useful on a tight schedule, an important feature not lost on Ugas. He comments, “The show setup needed to be done on the same day of the performance so we decided to use the LC panels as our graphics wall based in part on the ease of set up and the flexibility of use with the P3 since we didn’t know what the video source was until the day of the show. Five minutes after the graphics guy showed up, we had a show running. He was quite happy on the way back to the hotel after a 10 hour flight!”

By all accounts, the show was a rousing success. Ivete Sangalo moves on to Madison Square Garden in New York City, where she will record a live DVD.

Beachsound’s Paolo Mangones concludes, “Besides being rider friendly and cost effective, the Martin gear is very reliable. The event went very well. Everyone seemed to be very pleased, as were we!”