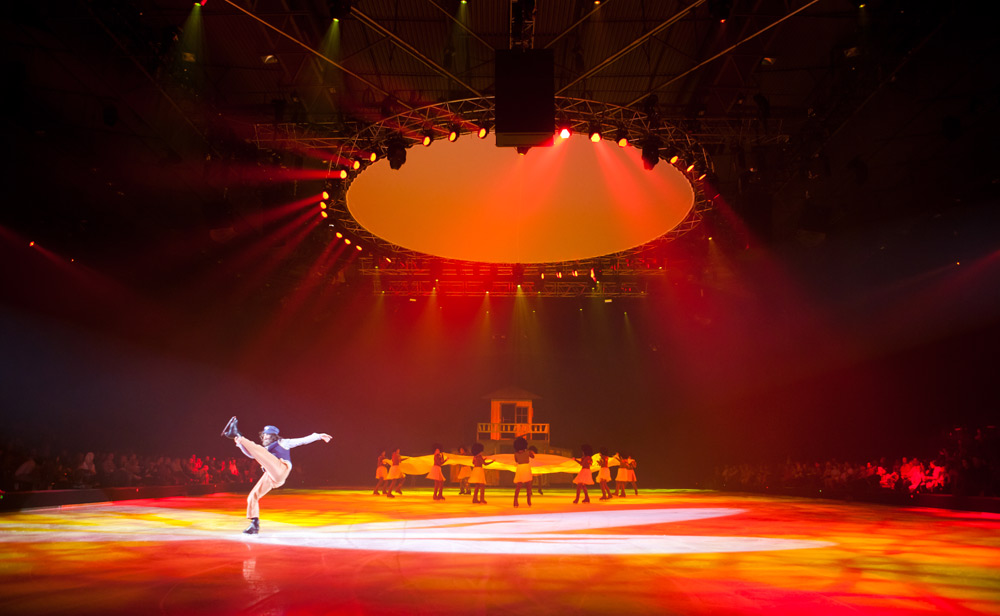 Astrid Lindgren’s beloved character, Pippi Longstocking, took to the ice on a large scale production that toured across Sweden prior to the summer. “Pippi - An Adventure on Ice” mixed melody with skating and featured a spectacular set and lighting design.

Lighting designer for the tour was Palle Palmé who used a large Martin rig made up of 100+ MAC luminaires to highlight the production, the first time a Swedish producer, PJP, has staged an ice show of this magnitude.

Reliable, available
Palle, who has worked with PJP for nearly 10 years on various productions, chose the Martin lighting both because of the reliability of the fixtures and because the rental company, Starlight, had a lot of Martin equipment in its inventory.

“I used MAC 2000 Profiles™ with custom gobos to toplight the ice in different patterns,” Palle explains. “The show included a lot of realistic looks like in the attic, on the water, on the grass, in the living room, etc., so I used custom gobos to get the different looks all over the ice.” Palle also used MAC 2000 Washes™ as general action lights and positioned them outside the rink at a 45 degree angle.

New favorite
But it was the MAC 301 LED wash light that Palle calls his new favorite. “It was the first time I used a large amount of MAC 301s and they really did the job,” he said. “I had them placed in a huge circular truss and covered the center of the rink with amazing effects from the extremely quick zoom and color mixing. We started the show with the circular truss laying down on the ice. During the intro it started to move upwards together with the dramatic music. The effects with the 301s really made the audience gasp!”

Palle also had MAC 250 Washes™ rink side as “shin busters” and for general coloring and also incorporated Atomic 3000 strobes in a ghost number.

Palle reports that “everything worked perfectly” and thanks his entire lighting team with associate Fredrik Stormby in the lead. “It was a fantastic team and Fredrik, who I have been working with for more than 10 years, did a great job. He is now working with me on a big television show for Swedish Television and we will do a lot more in the future.”