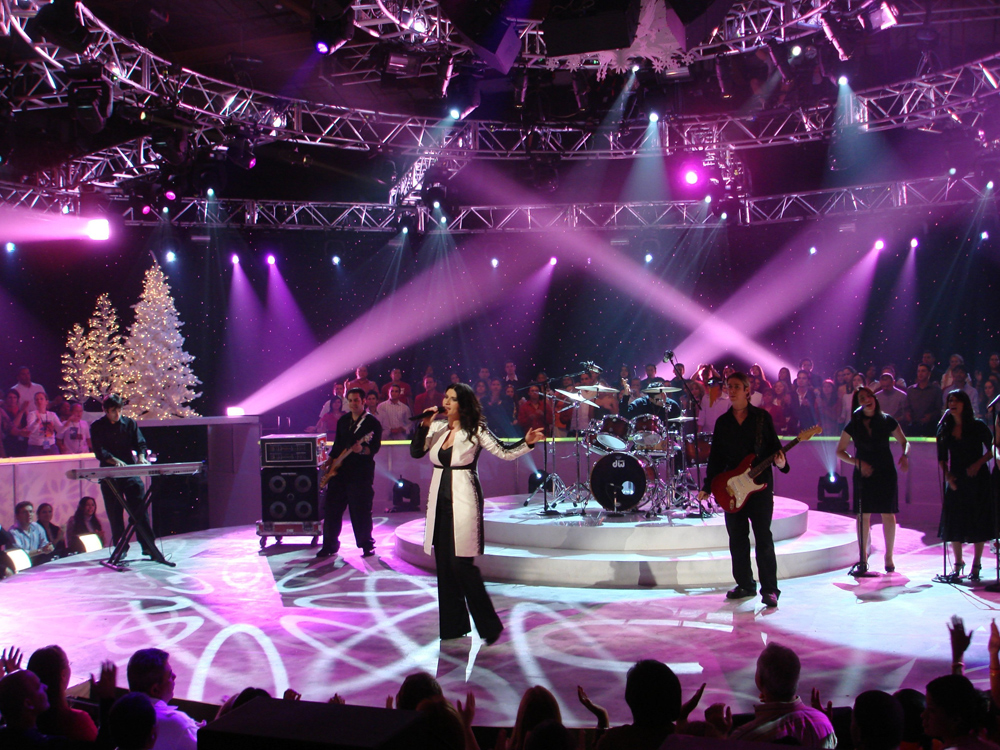 “The concept behind the lighting design was to help expand the set beyond its borders,” comments Carlos Colina. “The audience and starfield was the only set so I created a symmetrical look with two circular trusses with 10 spokes coming out extending towards the starfield. I finished it off with 20” box trussing connecting between the spokes to close off the look of the set.”

“Programmer Christian Choi advised me that Emilio Estefan loves big sources,” Carlos states. “That’s why we chose the BigLites, and when Chas from Zenith Lighting told me about the color mixing, I was sold.”

Carlos had two BigLite 4.5’s in the rig, 45 degrees off the center camera axis with four SuperBig 7K’s on the floor behind the audience and main stage area. He commented, “This was the first time using the BigLites and I have to say that if not for them the rig would have seemed empty. Since there wasn’t much of a set, the BigLites filled that void. They cut through the haze with these beautiful big beams that just filled the space with color. The BigLites were the highlight of the lighting rig.” Martin Professional, Inc. is the exclusive distributor in North America for the BigLite product series.

Zenith Lighting of Orlando supplied all the lighting equipment. “This was the second time using Zenith and they were as impressive as the first time - no issues or problems on site, the way it should be every time.”

Carlos had praise for the crew as well. “My whole crew was exceptional, without them there can’t be a complete show. When you have a professional and experienced crew, you as a designer can concentrate on the final look. I also used Christian Choi for the first time and was blown away by his speed and eye for creating amazing looks. Because of our lack of rehearsal time, his experience paid off.”