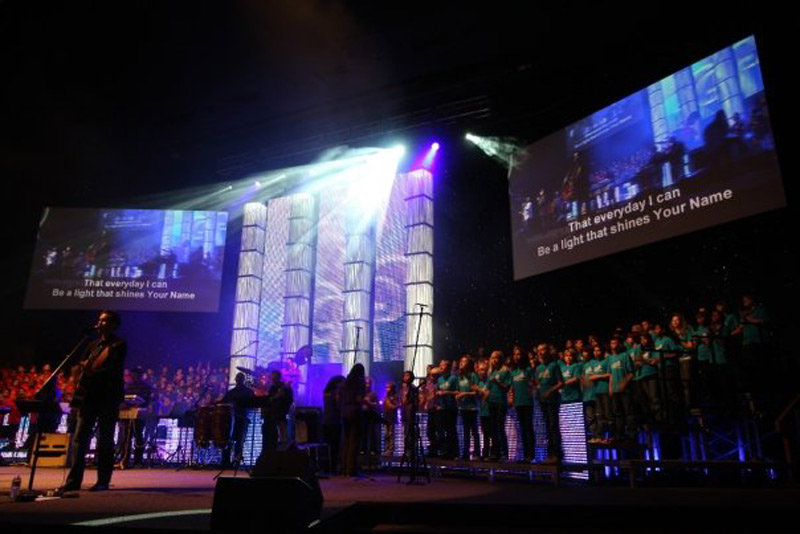 Capital Christian Center in Sacramento, California is one of the biggest Assembly of God (AG) churches on the West Coast, with seating for close to 3000 and a full production stage.

The Assembly of God district office decided to hold their annual two-day youth event - the Northern California/Nevada Youth Convention - a weekend of inspirational speakers and music - at Capital Christian whose capable media crew handled nearly all aspects of the event including stage design and set up.

“They’ve seen what we’ve done in the past, what our potential was, and the gear we have,” says Capital Christian Technical Director Brian Jenkins who handled stage and lighting design for the event. “They had confidence we could get the job done.”

Capital Christian boasts an all Martin moving light rig that includes some of the first MAC 700 Profiles™ purchased in the US as well as MAC 600™ washlights, MAC 250 Entours™ and MAC 250 Wash™ moving heads, and MX-10 scanners. For the NorCal/Nevada Youth Convention the church rented in Martin LC Series™ LED panels from AV rental company VERRENTS, which were used to form three eye-catching horizontal media ribbons and three mid-stage vertical stripes interspersed by pleated columns that were illuminated by floor-based Martin MAC 250s.

“We went outside the box for the opening video,” Jenkins says. “When we fired up the panels we really got the crowd going and people were blown away – it was one of those big wow factors.”

In the past, they’ve used pyro and smoke for special effects impact “but the panels have really revolutionized their thinking,” he states. “It was real bang for the buck. I’ve seen a lot of gear come through and the LC panels are awesome. Setup and tear down was one of the easiest – they are light weight and unbelievably easy.”

Besides their ease of set up, the semi-transparent, modular system of LED panels are often praised for their brightness. “You don’t realize what a powerful lighting fixture they are until you fire them up and put them at full,” Jenkins comments. “We were grateful to have the other Martins to complement them because if we had any other lights the panels would have overpowered them.” The panel’s transparency allowed him to project smoke effects through them as well.

“They held up great start to finish,” Jenkins says.

Graphical content was played across all LC panels with Capital Christian’s video department creating all the graphics themselves. “Once they saw their creation being used on the panels they loved it and created lots more themselves,” Jenkins states. “One thing these panels did was create a team building project for the crew. Once they saw them fire up it was like a pit bull on meat! They just loved them. The pastors liked them too as we had them leftover for Sunday services.”