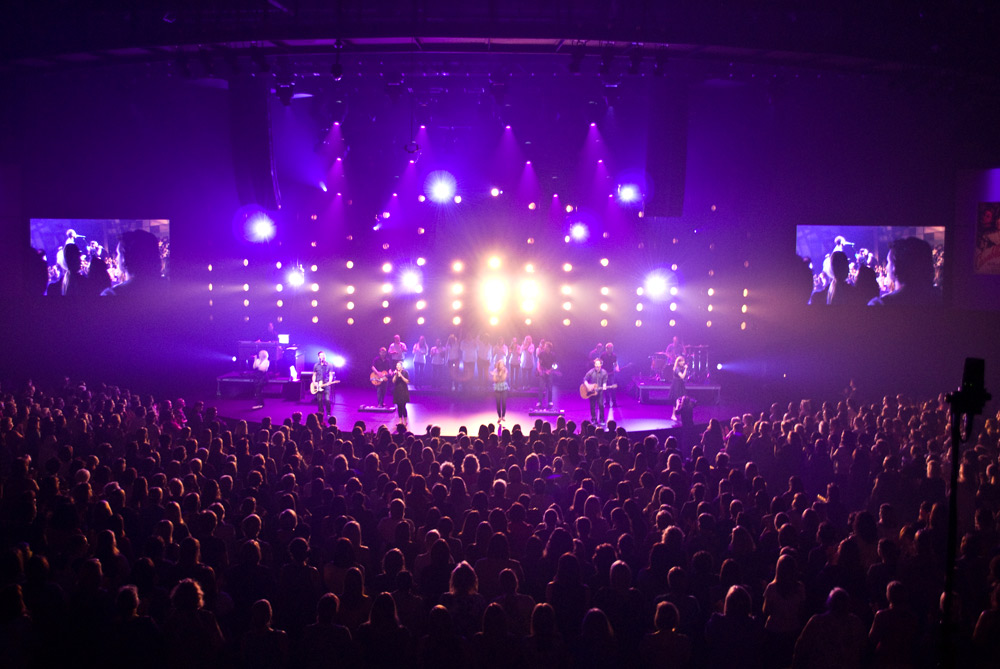 Church on the Move with Martin Professional Lighting

Tulsa, Oklahoma’s Church On the Move (COTM) is a modern-day house of worship whose contemporary appeal is exemplified by a dynamic and ever-changing rig of Martin Professional lighting gear.

“We are constantly changing our sets to keep things fresh and help our creative team connect with our audience,” explains Daniel Connell, who has served as the COTM's full time lighting designer for the last 3 ½ years. “On average we do a redesign every three months or less and average about five or six sets a year. For this reason we've decided to stick with renting all of our intelligent lighting rather than purchasing. This gives us the flexibility to change things up as we need without being hampered by the cost and difficulty of buying new gear and selling old. This also keeps labor costs down by not having to keep a moving light repair tech on staff.”

From traditional to contemporary
Connell’s long-time friend, Andrew Stone, had previously taken a position as the church's production manager and audio director and was in the process of helping COTM make the transition from traditional church looks with lots of white light to a more concert style stage design and brought Connell on board to help continue that transition. “He and I had toured together with various concerts over the years and had a great history of working very well together,” Connell stated.

Three venues
The Church on the Move campus sits on 300+ acres and includes three venues ranging from 1200 to 2500 seats. The largest venue, the adult auditorium, houses a Martin rig of MAC 700 Profiles, MAC 700 Washes and MAC III Profiles, although it is not uncommon to see Martin MAC 250 Entours™ or Martin smartMACs™ in one of the smaller venues which are used primarily for the kids’ ministry.

MAC 700 Profile
Prior to June 2010 most of the church’s fixtures were primarily non-Martin with the exception of 18 MAC 700 Profiles which they began to use in 2009. “I had used Martin gear in the past but this was the first fixture from Martin that I really fell in love with,” Connell says. “The light output from the 700s had no problem competing with the 1200 watt fixtures I had in the rig. My design style uses a lot of really wide beams and the combination of the wide zoom and the prism on the 700s puts out a massive beam that lets me cover a lot of area with just a few fixtures. Even though we don't have to maintain the fixtures ourselves I can't use a fixture with constant mechanical problems, and with events spread throughout the week we have very little time to have portions of the rig down. The 700s have been virtually problem free for the past year.”

Lighting integrity
Lighting equipment supplier to Church on the Move is Integrity Lighting and Sound of Tulsa, who has stocked Martin lighting since 2004. Integrity has also supplied LED lighting, rigging and more to the church and provides 24/7 support as needed.

“I could go on and on about the Martin gear and the quality but the bottom line is the relationship with Brad Haynes, Daryl Sutton and rest of the Martin team. These guys are just AMAZING!” says Integrity’s Steve Nance. “We use Martin day in and day out on the road and the reliability of these products is great. So when it comes to hanging them in a single location for a period of time, we know we can rely on very little problems.”

MAC III Profile
Connell knew he wanted to make another major change to the lighting rig this year so after his positive experience with the 700s he took a look at the Martin line. “Brad Haynes sent me a MAC III to demo during our Easter production this year and I knew right away that we had found the new workhorse of our rig,” Connell comments. “Steve Nance of Integrity Lighting was already providing a portion of our lighting needs on campus and I knew he had a great relationship with Martin.”

Connell commends the rig they had in place before switching to Martin gear and therefore expected the change to be a lateral move. “Wow was I surprised,” he states. “I've never had a fixture able to maintain such great intensity while at full zoom as the MAC IIIs can. Even when I'm using an extremely saturated color it still has the intensity to punch through my other fixtures.

“For a designer like myself that loves fat beams and saturated colors the MAC IIIs brought a whole new element to my design. My video engineer commented after the first event with them that he had never made it through one of my shows with all the cameras at zero gain until then. Video engineers usually hate me so that is a true testament to the power of this fixture.”

Concert style
Although continuously in flux, Church on the Move’s current Martin package (loaded in on July 1st) consists of 12 MAC III Profiles, 12 MAC 700 Profiles and 6 MAC 700 Washes. The current set up will remain until Oct. 1st.

Connell keeps the rig "concert style” with all the fixtures mounted to truss suspended by chain motors. All of the MAC IIIs and 700 Profiles provide backlight and eye candy while the 700 Washes take care of the front light needs. Discussions are under way to add more 700 Washes to the main room and to demo Martin’s new M1 lighting console for consideration in the two smaller venues.

Partners in light
Connell says he specifically chose Martin gear because of the customer service. He states, “The fixtures we had previously were great units that served me well but anytime I needed information or help from the manufacturer I found the process very laborious and frustrating. Martin has proven itself to be a company that cares about the individual customer regardless of the size of the project. I needed a company that would partner with us to make sure we had what we needed to get our message across to our audience week after week. Martin has done that.”

Steve Nance of Integrity has the final word. “We know Daniel and Andrew from their touring days and getting to work with these guys day in and day out is such a blessing! The Church on the Move team has been and continues to be a very exciting and very enjoyable experience. They understand the production world and they know what they want and why. It's fun to see a church staying on the cutting edge of technology!”