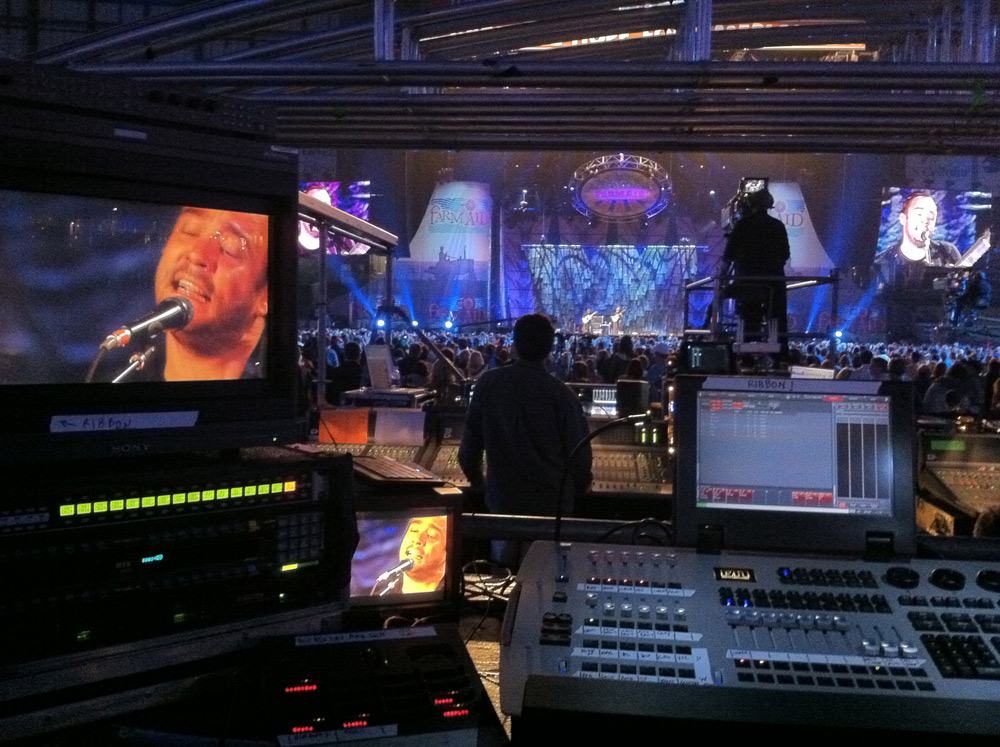 Lighting Programmer Seth Robinson selected the small but mighty Martin M1 console to control the concert and television lighting for Farm Aid, the annual benefit that supports and educates people about the importance of family farm centered agriculture. Lighting design for the event was by Stan Crocker with Bandit Lites again supporting as lighting vendor.

“I started using Martin consoles in 2004 with Sting and have been using them ever since,” Robinson commented. “I have programmed nearly every modern lighting console available and there are things I love and hate about all of them. I have found over the years that the Martin consoles consistently match my programming style. Naturally, I went with the M1 because I am familiar with it and because it is a terrific desk for television.”

This year’s Farm Aid took place at Miller Park in Milwaukee, Wisconsin on October 2 and was headlined by Willie Nelson, Neil Young, John Mellencamp and Dave Matthews. Robinson described the challenge of creating big energy to match the performances in a huge baseball stadium, coupled with his satisfaction with the M1’s performance. “I like combining the concert lighting with the audience lighting because it allows me to bring the energy and color of the show out into the house,” he says. “This plays very well on TV.” Martin lighting used on the show included MAC 2000 Washes™, MAC 2000 Profiles™ and MAC 250 Profiles™.

The M1 - feels larger than it is
Robinson continues, “We used 12 universes on this stadium show, but it felt like I was running a club rig - smooth and quick. The hardware design for the M1 is what really clinches it for me. There are 47 playbacks available on the front surface of the desk. As for manual control, the M1 has a great touch screen built-in along with the standard M-Series keypad controls. I have never felt like the desk was too small for a job. In fact, it feels much larger than it is, simply because it has so many playbacks available.”

The M1 is equipped with a fast dual-core processor, ensuring that the user interface remains fast and responsive, even if hundreds of playbacks and effects are activated simultaneously.

Simplicity generates ease of mind
The Martin M1 has been designed from the ground up with a single philosophy in mind - simplicity. The surface is clean and easy to navigate with fewer buttons and options to overwhelm the user.
Robinson admits to liking fancy technology, but indicates, “When it comes to my bread and butter, I want a desk that performs reliably and without a lot of fussy setup. Since I often program shows that I will not be running, I like to use a desk that won't make people call me at all hours asking, ‘How do I do this?’ By eliminating those panicked calls, the intuitive user-interface and straight-forward programming workflow have improved the quality of my home life. How many consoles can make that claim?”

MAXRemote control option creates path with no obstacles
Robinson experienced challenges with scheduling problems forcing him to complete his programming in 4 hours before dawn on the day of the show. He says, “Miller Park has a sliding roof, so the front of house area was covered and I couldn't see the audience. What was I to do?” Creatively, he chose to use the Martin MAXRemote from his iPhone to finish his presets. MAXRemote is a native, and free, iOS application that allows quick remote access to most programming functions of the M1.

“I climbed onto a camera riser and started my audience focus,” he explained. “Since the MAXRemote app works so smoothly, I was able to focus the 54 audience and architecture moving lights in about 20 minutes. When I was unsure about coverage in a couple of areas, I simply ran and stood in the light. The fixture controls in the app work smoothly and the network connection is robust. Basically, the app doesn't get in your way; you simply run around and focus lights. You have to feel the responsiveness of this thing to understand how good it is.

Robinson also had 24 moving lights on the delay towers that were used for stage fill light. “After color correcting and focusing the lights, I used the M1’s excellent DMX Input system to give control of those lights to Mark Carver, the Keylight Lighting Director,” he states. “For him, the control was transparent; he simply placed them on a submaster like any other instruments in his rig. This arrangement worked out very well for us.”

Ease of use
Robinson acknowledged, “Our Bandit and Upstaging crews were, as usual, top notch. Something that always makes me feel good is walking onto the stage during load in and seeing the desk set up at dimmers, running a test chase that the techs have written. This speaks a lot for the usability of the M1; even though those guys don't use the desk every day like I do, they still figured out how to patch it and write chases.”