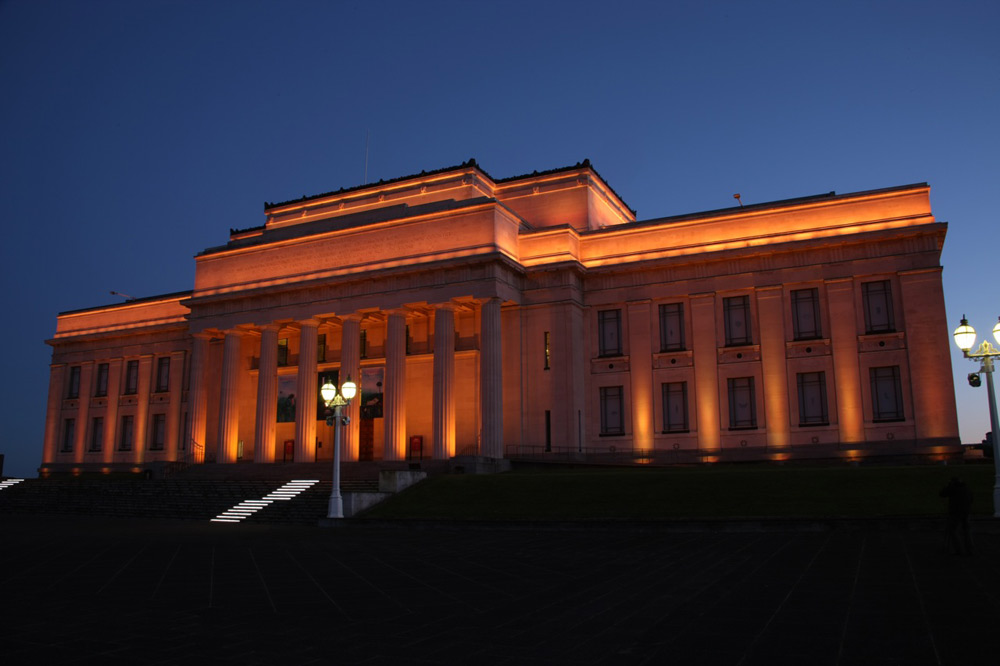 Auckland, New Zealand’s War Memorial Museum celebrated its 80th birthday by turning on its new exterior lighting installation at the end of 2009. The venerable building on Auckland's skyline is made of creamy Oamaru stone and was a perfect subject for François Roupinian's subtle lighting design.

Roupinian had lit some projects in the interior of the museum and was engaged to design and implement the exterior lighting project. Having used Martin Professional fixtures on a number of projects in his native Canada, he was keen to integrate them into this project also.

Inground 200, Exterior 200
In the end he used a number of Martin Inground 200™ full color mixing fixtures to uplight the main northern portico and also the east and west fountains on the corners of the building. The Inground 200 is a discreet, programmable 150 W buried luminaire.

In addition, he used a number of pole mounted Martin Exterior 200™ color changers to provide the base color wash over the northern facade. It was important for his design to have the CDM lamped Exterior 200s to fill gaps between the LED fixtures that were used to highlight architectural elements and also where necessary to provide a clean white light onto the stone surface of the building if required.

The color brief was simple and pastel to match the style of the building and serve its major function as a war memorial.

It was decided to run the control network over the existing Ethernet network in the building due to the long distances and multiple positions required for all four sides of the building. With an area of 10,800 square meters, it was straight forward to run the lighting control as Ethernet to the closest point and then convert back to DMX to drive the Martin and LED fixtures.

The Maxxyz PC™ based system is augmented by three MaxModule Button™ stations, one at each end of the building and one in the security control room. The Button module offers up to 30 customizable direct access buttons. The base program is run on astronomical time, but there is the ability to run and change programs simply as the Museum requires. In addition, with the network available at most points in the building, local events can be easily integrated into the complete look of the building.