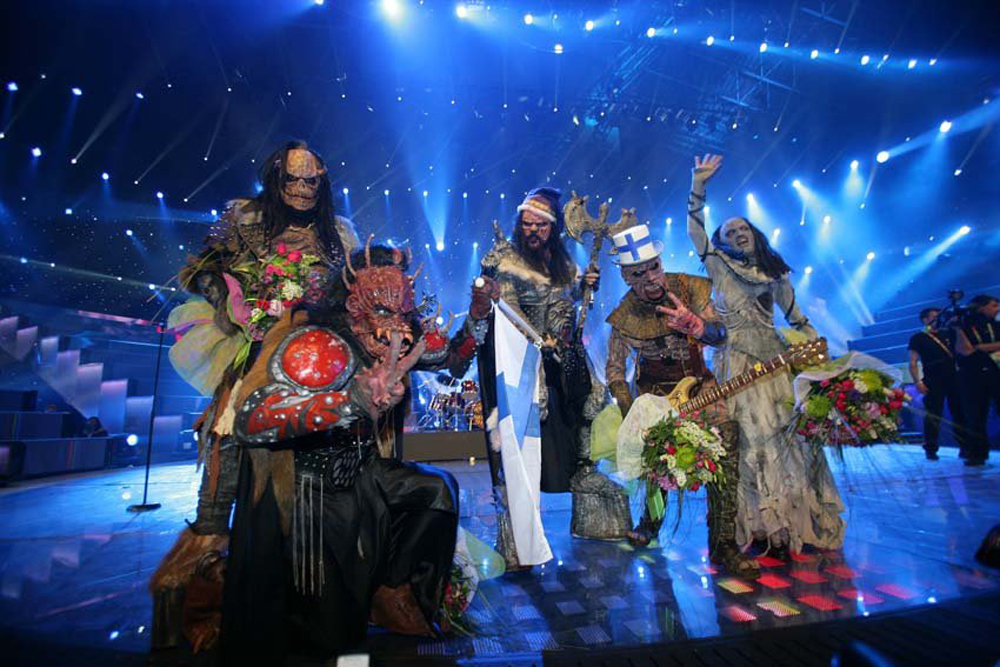 Eurovision 2006 a Monster of a Show

The 51st annual Eurovision Song Contest was a monster of a show, and we’re not referring to Finnish winner Lordi and their rock anthem 'Hard Rock Hallelujah.'

We’re talking about the 250+ MAC 2000 Washes, 200+ MAC 2000 Profiles and world first 20 Maxedia digital media system used to provide video content in and around the performance area. Whatever your take on the quality of the entertainment, one thing is for sure – the entertainment technology package was first rate.

This year’s event took place at the Olympic Indoor Hall, part of the Athens Olympic Sports Complex in Greece, with the final broadcast live on May 20th over the Eurovision network to over 40 European countries and Australia. Greek broadcaster ERT partnered with German production company PROCON Multimedia AG to produce the 2006 event. PROCON served as the main technical contractor and supplied the huge Martin lighting package.

This year's stage design, by Ilias Ledakis, combined ancient Greek theatre with high technology. The main stage platform included a 13-meter-wide circle with hydraulic moving panels made with LED modules. Surrounding the stage platform was a series of six hydraulic moving staircases for video imaging all lit by LED tiles. The panels allowed individual backdrops to be projected, creating a custom atmosphere for each song. The entire LED system was controlled by 20 Martin Maxedia media servers.

Lighting Designer Ollie Olma
Lighting designer and directory of photography for Eurovision 2006, and one of Germany’s top LD’s through the years, was Ollie Olma. He was responsible for lighting the 37 country delegations, as well as several Greek show numbers and other looks.

“It was a mixture of a rock ‘n’ roll and theatrical system,” Ollie states. “The truss set up was basically very simple. It was a matter of how much space we had to work with, how much weight we could put up, and what look the creatives wanted to achieve. I wanted a system that I could let completely disappear yet at the same time give me as much coverage possibilities at all angles, as well as at viewing angles for the cameras.

“With regards to creativity, when I got the song and video from each of the delegations I started to form my ideas about how to make the lighting most distinct and versatile for each delegation in order to make it most interesting for all. I really had no basic looks but created a different lighting design for each song.”

MAC grid
Nearly all the MAC 2000 Profiles and Washes were located in a huge grid rig (alternating) with some MAC 2000 Washes positioned on the floor. “The MAC 2000 Wash and MAC 2000 Profile are the lamps that I use the most and I chose them out of PROCON’s very reliable warehouse,” Ollie commented. “I did not want to choose a large variety of fixtures so by choosing only two different moving lights out of one family, I could make the system much easier for everybody. I used the 2K’s for the complete lighting – there was no tungsten or TV lighting – even all the key lighting was done with the 2K’s. They are very reliable.” Ollie also states that he had 5K’s rigged for backup but never needed them.

Maxedia
Because of the large amount of OLite and ILite tiles built into the set, video and video delivery played a major role in the show. The 20 Maxedia’s were distributed as such: one cue master Maxedia with backup located at FOH; a Maxedia and backup at each of the 6 staircases, all in HD; 3 Maxedia’s with 1 backup for the round light floor and panels, all in HD; and 2 Maxedia’s as content masters, one for the HD content and one for the SD content.

Jan Schroeder, who handled the video side of the show for PROCON, comments, “We had 9 active media servers that were in HD, which was one of the big challenges. We put the same content on each server which came out to be about 1100 files on each system (approx. 100 gigabytes on each Maxedia; 2 terabytes of video data total; Maxedia content provided by Mind & Bytes). We had 3 weeks of changing, overwriting, replacing and did a lot of on site engineering to make it all run more smoothly. We even got Maxedia updates from R&D International for new network functions and used extra Maxedia’s for graphic designers to render files on site. There were no problems with Maxedia during the show.”

The 1100 video files were not enough for the number of delegations however so the Maxedia’s stock content was also used. “The request for more content from the delegation was always there,” Jan says.

New Maxedia feature
PROCON requested an easy way to upload the Maxedia’s with the massive amount of content needed for the show, along with easy manipulation when replacing and adding files. A new Maxedia feature - a network protocol in a Master/Client configuration - was created just for this production.

“The decision to use Maxedia depended on whether we could get an intelligent network function,” Jan explains. “With 20 Maxedia’s you have 20 touchscreens which you of course cannot oversee at one time so the solution was a Master/Client cue and content network at one station which was pushed through the entire network. The result was that workflow turned out to be quite smooth. Backstage media was uploaded to all systems while at FOH cues were adjusted and created simultaneously. People who have to deal with multiple media servers on a show will love this function.”

Ollie adds, “We needed a server that could do a good amount of resolution and good playback and at the end of the day - once we had the modifications from R&D – it all worked to complete satisfaction. Those guys really worked hard.”

To conclude, Ollie sums up the event, “My design philosophy is to have as much fun as I can with the budget that I am given whether it is a 5 Euro budget or 5 million and this was definitely a fun project. To me it is like a dream come true – like waking up every morning and going to a big toy store and playing. I attack everything with the same affection and seriousness. I think all the parties involved had fun. I hope we did a good show and I hope the audience liked what we did and that it came across nicely.”