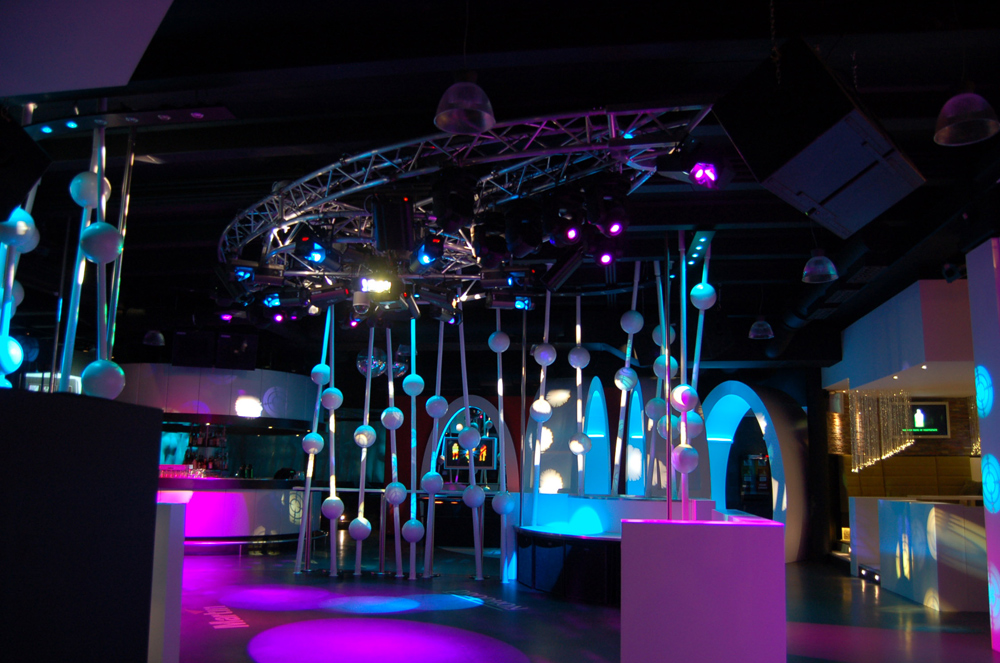 Swedish actress Greta Garbo helped usher in the Golden Age of Hollywood and nightclub Grand Garbo just might do the same for Sweden’s club scene.

Located outside Stockholm in the suburb of Sundbyberg, Grand Garbo is a large nightclub with an impressive 25 years of clubbing experience behind it, a virtual institution in the Swedish club environment. A recent 13 million SEK refurbishment that includes a large Martin package of entertainment and architectural lighting gear is set to keep Grand Garbo a top clubbing destination for years to come.

Rune Renewal
Eight years on from a renovation that also included Martin gear, owner Ulf "Michael" Westerberg felt it was time to again revitalize the club and contacted Henrik Rune of interior design firm Rune Design of Denmark, the same designer he entrusted with the renovation eight years earlier.

The latest redesign, which covered the club’s top floor, was comprehensive and Rune worked with Westerberg on the new look for nearly a year. “When a club or design gets to be 5-7 years old it is time to refresh it - there is a need to create something new for the customer,” Rune commented. “At Grand Garbo we redesigned everything from the floor to the ceiling. We had to take everything into consideration otherwise we cannot create the right feeling for the club.”

“The goal of the redesign was to create an interior that is international and I think we succeeded in that,” Rune says. “We wanted to create an interior where everybody feels comfortable but still in a modern way so we created a lot of small environments within the club; small, cozy corners. Although you can see the dance floor from anywhere you sit, you still feel that you’re in an intimate environment.”

With four DJs playing their own distinctive music as well as a live band, the club attracts a wide variety of people who come from all over the Stockholm area every weekend. With the new design, everyone can find their own little spot in the club.

Arrive early, leave late
Grand Garbo can accommodate up to 1500 guests across two levels. Downstairs is the Greta Bar & Bistro with restaurant, live stage and two dance floors, which was redesigned two years ago. Upstairs at Garbo, where the latest redesign has taken place, is the main dance area plus small dance floor, both with DJs, serviced by three full bars.

“Our main goal with the redesign upstairs is to get guests to arrive early and leave late,” Rune says. “By creating smaller environments within a larger club guests feel more comfortable, linger and stay longer. There are a lot of small angles to the space so that guests have to walk around to see everything, to meet other people and experience the club. We’ve created an element of curiosity so that you have to get up and check out the club.” Rune says the concept is a combination of past and new ideas but design-wise is totally new.

At Garbo, dynamic light is omnipresent, coming from both ceiling and floor to create ever changing atmospheres across the club. “Not every area has color changing light however. That would be too much. Some areas are calm while some reflect the energy of the dance floor.”

Dynamic color doesn’t stop at the dance floor. Several areas around the club are awash in mood inducing color from Alien LED Downlights™ mounted in the ceiling and behind seating. A unique and slightly provocative wall motif of human backsides is illuminated by ceiling mounted Alien LED Downlights, fully controllable by the DJ. On the opposite side of the club are more ceiling-recessed Alien Downlights used to transpose the space in a sequence of hues.

Alien LED Downlights are also used on decorative ‘illumination poles’ that abut the main dance floor, and illuminate a series of interior arches and dance podiums as well. The entire atmosphere of the club can change simultaneously - ceiling, walls, dance floor, illumination poles, arches and podiums – controlled from the DJ booth. Lighting control is handled by a Martin Maxxyz PC™ and PC-based LightJockey™ system.

As the multiple bars are obviously the major revenue generating areas, there is also lighting focus on them with no more than 5-7 meters from any seat to a bar.

Jem smoke and haze
Providing a flexible, total smoke solution for the club’s multiple dance spaces is Martin’s Jem line of foggers and hazers. Located on the main dance floor is a Jem Hydra™ fog system, a unique fog generator that allows multiple DMX controlled output heads to be located remotely (up to 150 m) for total flexibility in fog placement. A centralized pump at floor level makes fluid refills a no hassle experience.

In Grand Garbo, the flexible Hydra system meant that a fog delivery infrastructure could be implemented without taking up too much room. The system also allows for the use of various fluid types, which means the club can create a variety of effects from atmospheric haze to full fog using the same machine. The Jem Hydra system uses Martin’s Pro Steam fluid for explosive yet fast dispersing white bursts of fog, much like a CO2 blast effect.

Other atmospheric smoke and haze effects come from a Jem ZR33 Hi-Mass™ fogger and Jem K1 Hazer™. The Jem K1 is a continuously operating hazer that features a long hang time for greater fluid economy with an overall power consumption half that of other hazers in its class. It also includes a patented backup system and low fluid consumption that significantly reduces service and maintenance. The rugged hazer uses a specially-formulated K1 Haze Fluid that leaves no residue on light fixtures.

Foliate facade
Outside, the club’s entrance also received a makeover, the facade replaced with a white foliate glass that is an ideal medium for color changing light. Mounted in the entrance awning are Martin Extubes™, linear LED luminaires, five on top and five beneath, which allow the club’s public face to mirror the excitement inside.

“Lingerie is nothing when it’s in the box”
Owner Westerberg, who admits he likes to build and create new things, feels he will increase turnover with this new design. “The goal of the redesign was to create the whole nightclub, including the interior, but also to get more people in and to spend more money,” he says. “The interior is one thing, but lighting and sound is the main thing. That is the nightclub.”

And what has the biggest impact? “If I have to pull one ahead of another it would be the lighting,” Westerberg says. “Perhaps because when you drink you become more visual and pay less attention to the details in the music. Lighting is a show; it’s very flexible and can be used not just on the dance floor but everywhere.”

At Grand Garbo, with the ability to set the mode across the entire club – also on big screens, plasmas, and projectors - lighting plays a key role. “You can see the difference that quality lighting makes,” Westerberg continues. “When you invest in creating some very nice designs and interiors you multiply the impact by adding the right dynamic light concept – you change the looks completely in multiple ways and get much more out of it. Let me say it this way – lingerie is nothing when it’s in the box. You need to put it on something. It’s the same with the lighting. You put it on something because you want to expose it.”

Quality pays off
Westerberg wanted to make something different with Grand Garbo that would set it apart from the other clubs in Stockholm, and he has succeeded. In order to raise the level of the club, he wanted and used the best.

“Quality wise, as far as the interior and sound and lighting, I would say it is the best in Sweden. That’s what keeps them coming to the club,” he says. “I change the look, put my heart in it and never buy cheap equipment, and people appreciate that. I like to think that quality always pays off, not only in financial terms but in other aspects as well.”