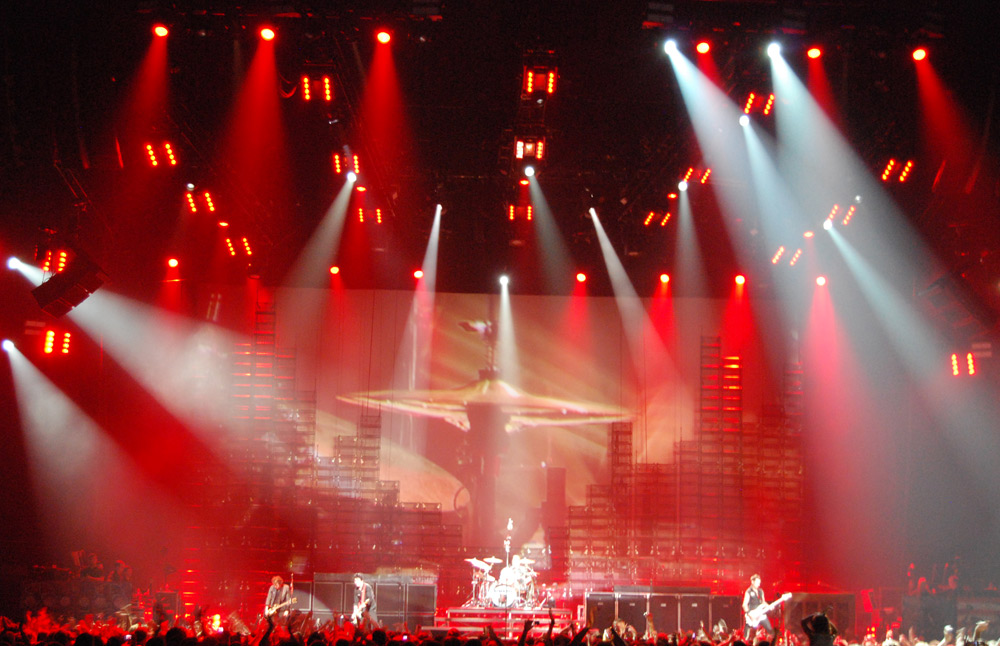 Green Day is currently on their mammoth “21st Century Breakdown” world tour which started earlier this year and is scheduled to continue towards the end of 2010.

The band has just finished the Australian leg of the tour where they received amazing reviews for their professional, endurance-testing shows where anything goes. Never missing a beat and behaving in an expert manner are 37 Martin MAC III Profiles™ featured in the lighting rig.

”The MAC III’s do a really good job for the throw distances that we have as some of them are very long,” commented Kevin Cauley, lighting director for the tour. “Our upstage truss is trimmed at 42ft off the ground so there are some very long throws required.

“This is the first show that I’ve used the MAC III’s on and I think they’re great. The effects wheel is awesome. It’s just a really good, heavy-duty light and the crew has had no real problems with them. We’ve found that the lamps in the MAC III’s are lasting a good five-hundred hours longer than Martin suggested. We were quite impressed by that.

The rig has five fingers of truss as well as wing trusses to increase the breadth performance area and all contain MAC III Profiles. The lighting designer for the show is Justin Collie of Artfag.

The lighting intent for the show was to try to retain the old-school punk feel but to bring it into the current times with ideas such as LED elements. In true Artfag manner, fixtures are joined together to create a whole new lighting fixture within themselves - in fact the most dominant fixture in the show is called the LED Fag Pod; two LED fixtures that sandwich a Martin Atomic 3000 strobe with Atomic Colors scroller. A total of thirty-nine of these gems are distributed throughout the rig.

”They’re more of a visual element than casting actual illumination on the artists,” said Kevin.

Lighting supply in Australia is through Martin distributor Show Technology with Epic Production Technologies lighting vendor for the US leg.