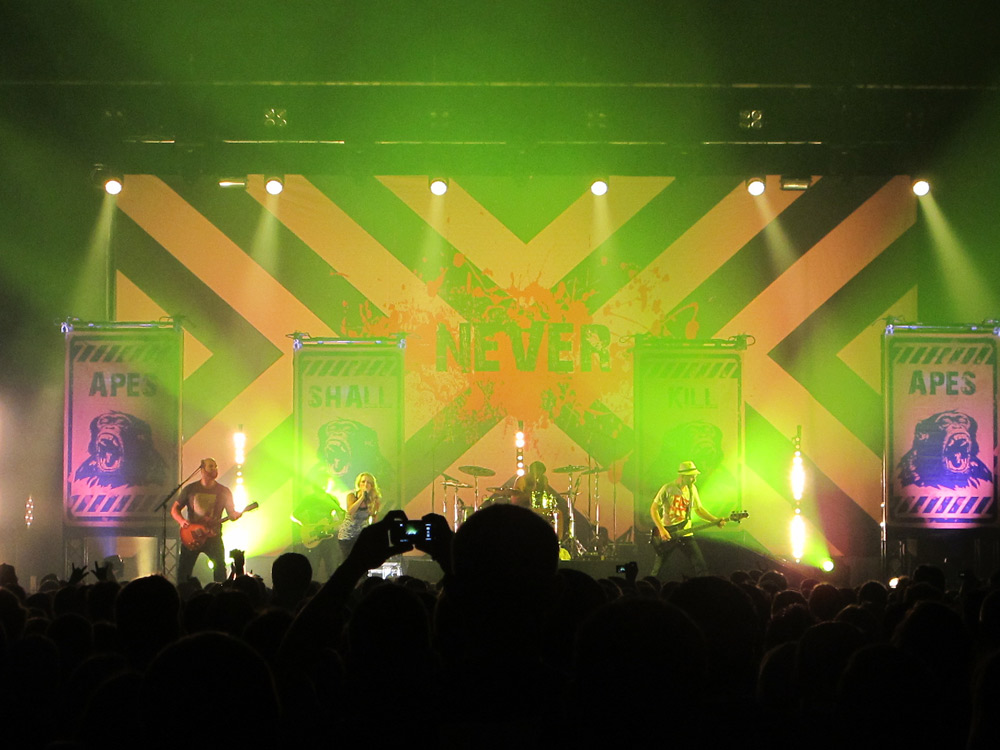 Lighting designer Stephan Aue of Ambion GmbH is one of the first LDs worldwide to use Martin Professional’s new MAC Aura wash light and placed 42 of the award-winning fixtures on the German rock band Guano Apes’ current European tour.

“The Auras came into the design pretty late,” says Aue, who handled lighting, stage and set design for the tour. “In late summer, Markus Klüsener of Martin Germany approached me about seeing a new product before its official release at PLASA and as I was more than ready to see something new, I said yes. He showed me the Aura and I fell in love with its features right away.”

“We were all amazed about the fact that it is an LED wash with such a cool beam angle and zoom,” Aue continues. “The eye candy was also catchy enough to think about investing and the decision to buy them fell the very next day. Ambion was one of the first companies to order some and as soon as we got the okay for an on-time delivery for the Guano Apes tour, I replaced all the wash fixtures in the original design with the Auras.”

The Guano Apes’ “Bel Air” tour kicked off in early summer with a setup that includes a
1.5 x 4 meter set piece truss on wheels for easy moving on and off stage. The set piece holds huge letters in the style of the "Hollywood” sign and was equipped with an Atomic 3000™strobe and LED PAR lights. With four of the set pieces – the letters A, P, E, and S - Aue decided, due to budget and space (trailer) constraints, to switch from twelve LED PARS and four Atomics to four Auras. “I ended up with a more versatile and easier to build setup,” he says.

He also replaced wash lights in the truss and on the floor with Auras (12) and used four more to light banners. “The backside of my four moving set pieces were equipped with six Auras apiece (24 total) so that we could rotate the set pieces during the set and use those extra lamps as an effect,” explains Aue. “The Aura’s beam and zoom features are amazing. I really like the colors, and the weight and the low power consumption are helpful in setups that would never have been possible with such a strong lamp before.”

Martin M1 controller
Aue also serves as lighting operator on half of the tour’s shows with the other half operated by Christian "Maxi" Maxwitat. The Guano Apes tour is the first time Aue has programmed a tour on a Martin M1 console.

"Coming from a Hog, this desk is by far the only alternative. I´ve never learned a desk this quickly and easily!" Aue says of Martin’s easy-to-use console. “The whole desk felt familiar right from scratch. It´s just a pure logical interface and with a few small exceptions, I felt home right away.

“It has 22 faders and loads of Playback buttons out of the box and it is easy to understand. It has a backup option via the network with either a PC solution or a second console. It also has an easy remote option via an iPhone or iPad with a built-in OSC interface which is a very helpful tool.”

Aue says that he is always curious about new controllers and wanted to give the M1 a try. “We played three shows with Linkin Park over the summer and I had a long chat with their LD, AJ Penn, who was using the M1. I really love the size and weight of the console and the fact that you can take it on a plane. I decided to see what it can do and because live rock shows are the best way to learn a console, Maxi and I decided to take it out on the Apes’ tour.”

Aue concludes, “I cannot thank Markus enough because his support is really awesome. I have a second M1 console as well and it gives me the opportunity to get to know it even better.” All lighting gear for the Guano Apes “Bel Air” tour is supplied by rental company Ambion GmbH (www.ambion.de).