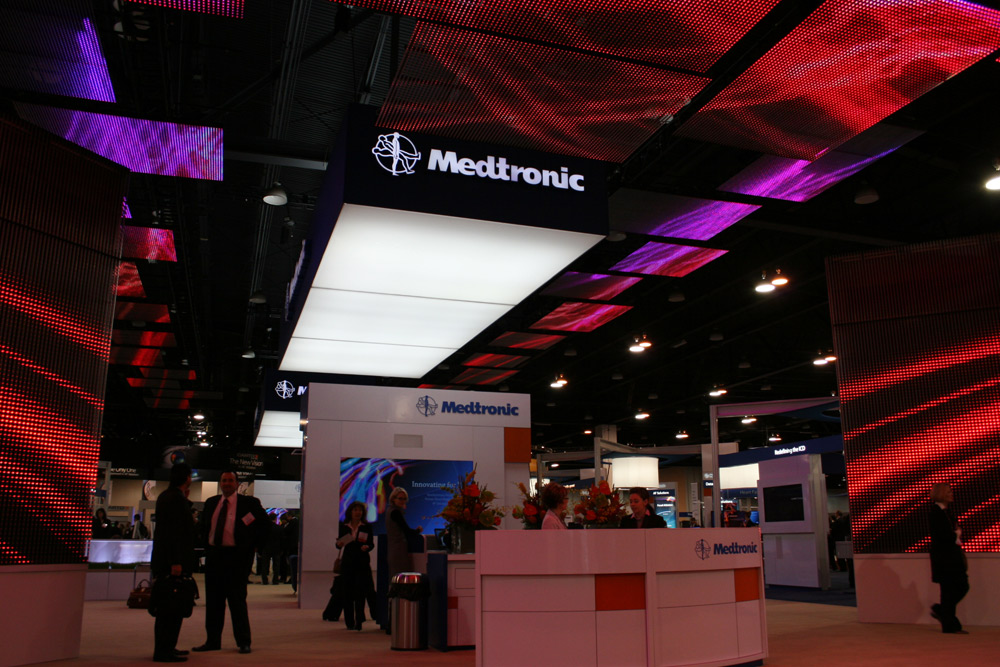 Medtronic, a leading medical device company, wanted to communicate an innovative, sophisticated image to its target market of doctors and health care professionals at the recent Heart Rhythm Society (HRS) exhibition in Denver. Medtronic attended with a large, environmental booth that was focused on innovation yet featured an element of artistic sophistication and used an animated ceiling of Martin LC Series LED panels to get the message across.

Lightswitch consulted with long-time collaborator and exhibit producer Group Delphi on the booth’s lighting design to create an engaging, immersive space that also radiated comfort and encouraged guests to linger, something different than the more typical areas of a convention center.

The last frontier
Working with Group Delphi on the sophisticated technology approach, Lightswitch turned to Martin’s LC Series LED panels to environmentally treat the space and present something aesthetically creative rather than a regular video screen and message delivery device.

“One of the things we wanted to do and one of the areas that the LC panels are absolutely perfect for is the ceiling space above the booth,” Featherstone says with reference to Lightswitch’s Nintendo booth design at last year’s E3 show. “It is really the last unexplored frontier of exhibit work.”

The LED ceiling communicated to visitors something interesting worth checking out. The unique nature of the booth also turned it into a landmark and meeting point.

“The ceiling-based device proved very effective,” Featherstone states. “It not only defined the shape of the booth and took ownership of the space, but people just aren’t used to seeing the ceiling being utilized and found it visually interesting; it gave a really interesting sense of positioning within the show floor.”

Bright, easy and light
Featherstone notes three reasons why the LC worked so well for this project. “It’s an extremely bright panel that hits the sweet spot between low and high resolution; it all went up incredibly rapidly in one day thanks to the structural nature and integrity of the frame; and the lightweight and rigid nature of the LC meant we didn’t need a lot to hang them from.”

Collaborative content
Content across the panels was a collaborative effort between Group Delphi and Lightswitch, a blend of custom footage with graphics from Lightswitch’s extensive stock library. It was a conscious decision not to use high resolution panels and Lightswitch delivered the content to fit that delivery methodology.

Lightswitch employed Martin’s intuitive Maxedia Broadcast™ media server as a type of idea generating sketchbook for content. Media programming was done by Jason Lindahl with on-site supervision by Lacey Taylor, both of Lightswitch.

“It’s an incredible tool in terms of the ability to micro-align a large display like this,” Featherstone says. “To have the P3 with the ability to get the panels in perfect alignment was invaluable. It’s been the answer to so many of our prayers in working with the LC panels. It’s a great improvement on what was already a valuable product.”

Spirit of partnership
Teamwork is crucial on an event like this, something not lost on an industry veteran like Featherstone. “One of the things that makes this kind of event doable, that lets us push the boundaries and the envelope, is the level of support we get from Martin. Martin is with us 100% and we really value the spirit of partnership that Martin has with us, particularly when we’re trying to do things that are a little out of the ordinary,” he concludes.