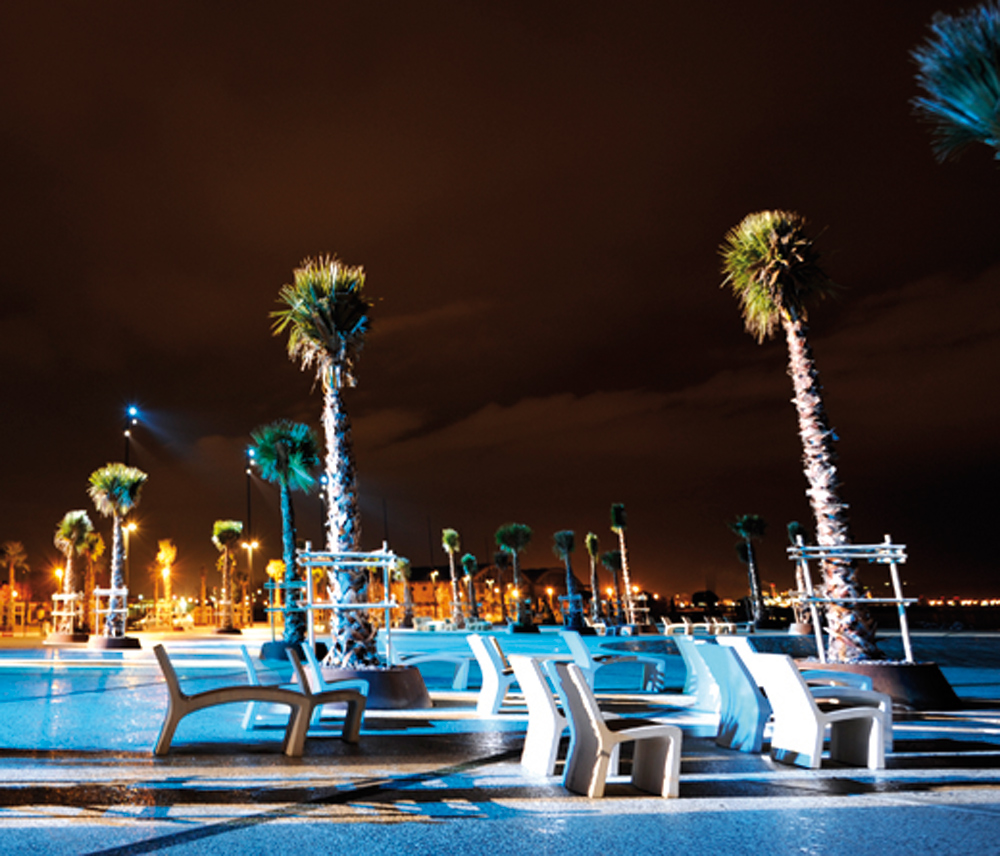 Thirty kilometers northwest of Marseilles is the municipality of Berre l'Étang in the south of France. Berre-l'Étang, or Pond of Berre, is dominated by a large “pond,” actually a 155 m2 lake, and was once home to an important naval air station.

Occupying the air station site is a contemporary urban park that hosts a unique lighting project aimed at recreating the area’s bygone era. The large public space, a special place for residents of the city of Berre, encompasses the banks of the pond, walking paths, roads and a large open field.

Attention to detail
Pierre Nègre of L’Atelier Lumière has created the special lighting concept for the shores of the park. The concept, which proposes various lighting perspectives that are “readable” from multiple vantage points, is meant to impart a feeling of comfort and guidance. Discrete lighting gently exposes the pathways and road areas while more dynamic illumination washes the esplanade in color according to the speed and direction of the wind.

Palm shadows
At the heart of the new public space is a square with palm trees. Light from Martin Exterior 600™ color changers frame the palms, projecting a series of shadows onto the ground like paintings in a gallery. The white frames redefine the area by adding an element of structure while colored waves of light wash the entire space. The Exterior 600s, mounted on 16 meter high posts, are painted in black and fitted with custom colors.

Whichever way the wind blows
When the public lighting of the roads and pedestrian paths remains static, the colored lighting of the square changes depending on the speed and direction of the wind. Instruments atop the posts measure the wind’s parameters and subsequently determine which of eight color sequences is launched. A variety of scenarios is possible thanks to the flexibility of the Exterior fixtures…and the changing weather and seasons.

Reclaiming the shoreline
The lighting concept at Berre l’Étang has done more than reveal the inherent beauty of the area; it has allowed the residents of the city of Berre to reclaim the banks of the pond. The city is reportedly so delighted with the result they have proposed acquiring more Exterior 600s for use in future events.

Pierre Nègre, who knows the Exterior 600 well from previous installations such as Chateau des Ducs de Bretagne in Nantes and the Zenith in Strasbourg, has been recognized for the Berre l’Étang illumination from the International Competition Les Trophées LumiVille de la Conception Lumière.