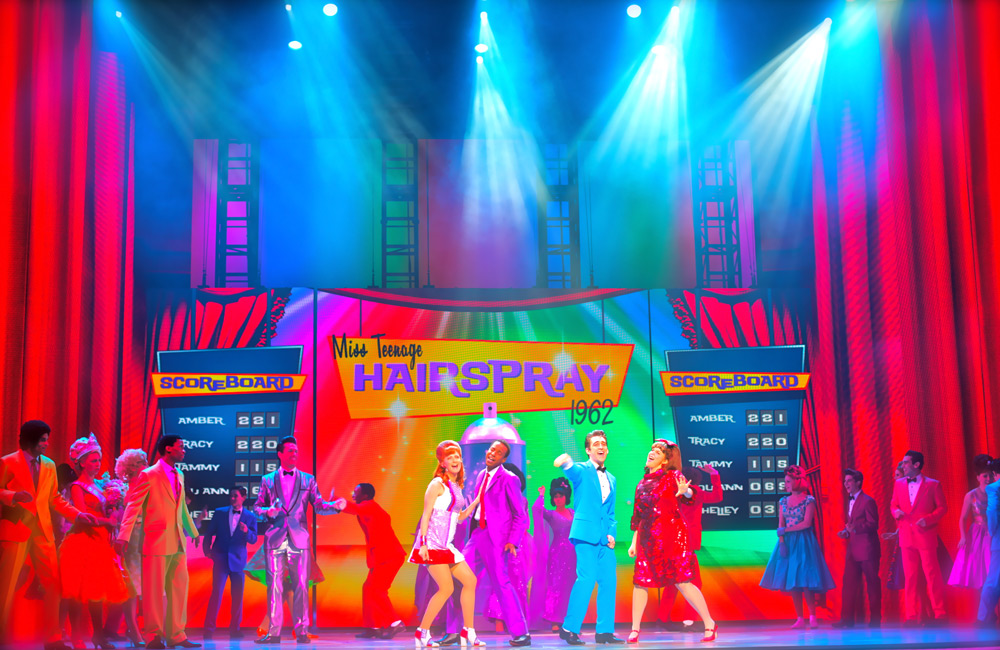 Big hair, big heart, big hopes and an even bigger production - welcome to Hairspray the Musical!

A visual assault
The show’s proscenium arch is trimmed with LED ropes that outline a giant television through which the audience views all on-stage action. There are four legs, which are individual LED screens, either side of the stage plus at the back is one large LED screen that can split into three when required and can move upstage, downstage, up, and down. In fact, the stage set is entirely digital and animated.

It is an idea that director David Atkins OAM has been mulling upon for some time and with the assistance of designer Eamon D'Arcy has brought to life with a visual assault never seen before in theatre! Characters interact with the screens and even jump ‘in’ and ‘out’ of them to the absolute delight of the audience.

Lighting designer Trudy Dalgleish describes the production as totally ground-breaking. “People are likening it to when Cats first opened and the set was brought into the auditorium,” she said. “It was a completely new way of presenting theatre and this show sets a new bench mark in much the same way. The whole show is like a cartoon that the cast interacts with so there is continual media on the screens throughout the show. Lighting wise this presents huge challenges, particularly to make it bright enough to ‘pull’ people out of that content. Also, as most of the time the cast are interacting with the screens, they are usually only 500mm away from the screen. We run the LED screens at about 8 – 12% intensity and you can throw quite a bit of light onto that as they seem to soak it up.”

MAC 2000 Wash XB
Trudy needed a bright, punchy moving head light to compete with the LED screens and she immediately opted for her favorite fixture – the Martin MAC 2000 Wash XB of which there are thirty-one.

”They were basically the workhorse of the show and really they did most of the lighting. They are really, really bright. The MAC 2000 was very bright but these are amazing. David Atkins asked me to meld the actors’ world into the cartoon world so I had to continue the content from the screens onto the stage. The content on the screens has very saturated color which means I had to use saturated color too, which the MAC 2000 XB allows.

“The MAC 2000 XB Washes performed really well, in fact, they were excellent,” she continues. “I was going to use other washes but when we compared the two units we found that the MAC 2000 XB’s were four times as bright. I’m a real fan of the MAC 2000 wash lights, it’s the best wash light made since the VL500 twenty years ago. It floods fantastically, spots fantastically and has really good color. It’s one of the best lights ever made!”

Whilst the MAC 2000 Wash XB lights enveloped the stage with their light, Trudy used 14 Martin MAC 301™ LED washes for highlighting.

“That worked really well and I was very impressed by their intensity for such a small unit so I’ll sing their praises too!” she declared. “They’re a great little fixture and very versatile.”