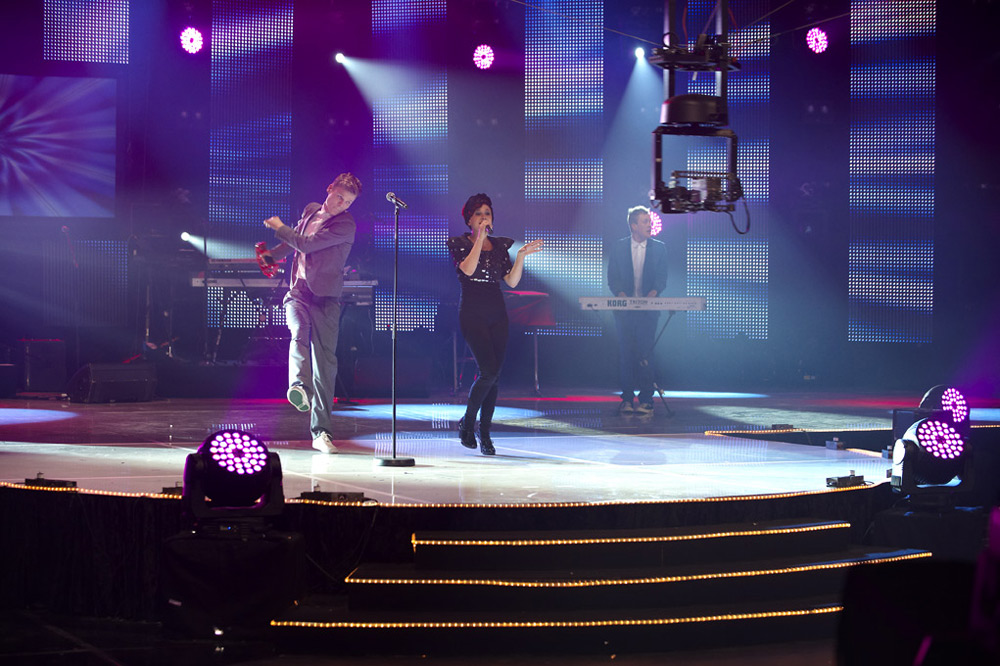 Broadcast on January 9th from Messecenter Herning, Sport09 recognized the year’s best in Danish and international sport. Pedersen commented, “This year I wanted to try something new and decided to try out the MAC 401. We got some very good looks with them. It has a big fat beam that I loved, and the color mixing was good. They made a good fill across the set.”

Used as both a set design piece and beam luminaire, Pedersen dispersed 401s between background rows of Martin LC Series LED panels with several units on the floor lining the main performance stage. “It’s light and small and the design is also nice,” he says. “It is important to me that there is warmth to the light and that they are nice to look at on stage. The lights we use with performers on stage need to work with the background.”

“I was pretty impressed with the beam,” Pedersen says. “When there are cross shots with the camera it is important to have some nice beams in the background. No matter where the camera points there should never be dark spots and the 401 made for a nice background. In one look we had them at white and used the segment control to give it a different look.”

Because the 401 Dual’s color mixing system fully blends colors at the source before they leave each lens, there are no problems with rainbow shadows or the multi-color lens looks of traditional LED fixtures, a fact that wasn’t lost on Pedersen.

“It’s a competitive unit and I like that the color mixes inside the lens instead of like other units that look like an error when you look at them. The light output is pretty impressive as well. We were running them at about 50-60%.” He also used the fixture’s fast zoom to tighten the beam angle so there were no problems with light spill.

The overhead rig at “Sport09” was absolutely huge with multiple circle and straight trusses covering both the stage and large audience area. The trusses were lined with an assortment of Martin MAC luminaires including MAC 700, MAC 600, MAC 2000 and MAC TW1 moving heads.

Nordic Rentals AS, one of Scandinavia’s largest rental companies, handled the technical sound, lighting and LED solution which included supply of the Martin gear.