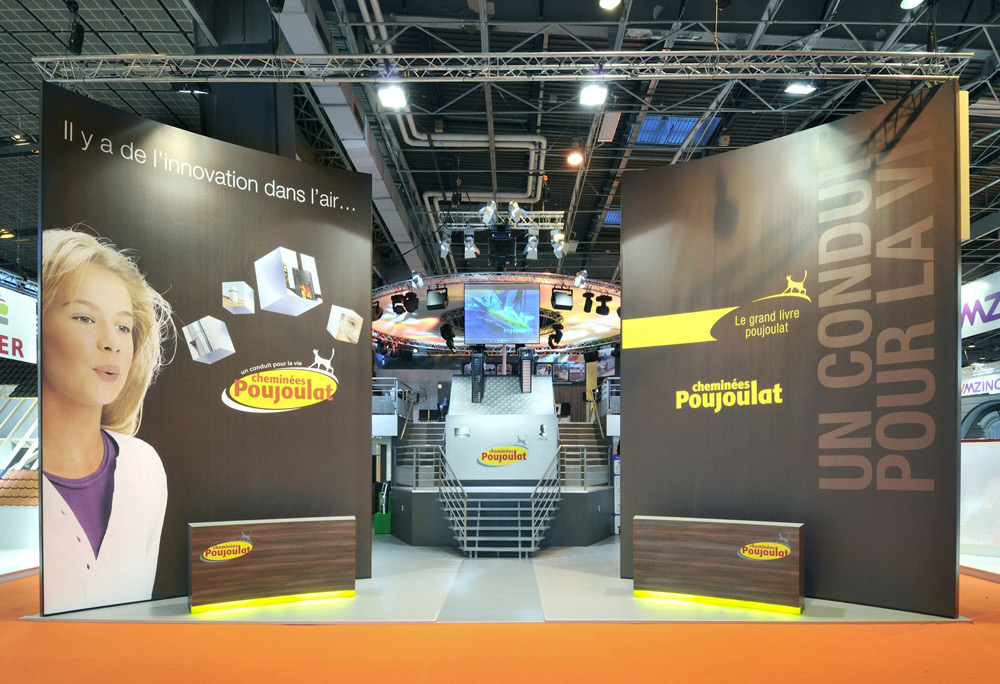 MAC 401 Dual™: Living Up to Expectations at Batimat

The Batimat trade fair in Paris provided an opportunity for visitors to get their first glimpse of the new Martin MAC 401 Dual™ in operation. No one could possibly miss it on Poujolat’s eye-catching stand. Throughout all the shows and product presentations, the new LED fixture lived up to expectations.

An event of international scale
When it comes to building and construction exhibitions, Batimat is the world leader. The fair is held in Paris every other year and showcases the most comprehensive range of products, materials and services on the international stage. In terms of figures, Batimat is huge with 2,779 exhibitors and 447,000 visitors from 141 different countries.

A major player
For more than 30 years, Cheminées Poujoulat has been experts in designing chimneys and flues for private houses, as well as public and industrial premises. As the European market leader, the company’s importance is reflected in its exhibition stands. At every event, Poujoulat commissions Concept Audiovisuel, headed by Pierig Burgin, to provide sound and lighting. All the lighting provided by Concept Audiovisuel consists solely of products from the Martin range.

The stand
The Poujoulat stand at Batimat was based on an original idea, which emphasized color, light, transparency and design. Throughout the days, the stand was full of the rhythms of shows combining music with dance. The specification was clear: use lighting in two distinct ways, give the stand a conventional look for the general presentation of the area, and the look of a stage as the impetus for the various shows being put on.

To achieve this, Concept Audiovisuel was the first company in the world to use the new MAC 401 Dual. The fixtures were installed on the stand’s upper level, whose ambiance was achieved with subdued lighting. Mounted on two circular trusses suspended from the ceiling - one 13m in diameter, the other 4m in diameter - were 10 MAC 401 Duals and 12 Martin MAC 700 Washes.

MAC 401 Dual
The MAC 401 Dual is an exceptionally versatile LED wash luminaire with an innovative dual-faced design for extremely flexible functionality. It also offers other advanced features like a rapid zoom and individual LED control.

The choice of the new 401 for the stand was not taken lightly. According to Philippe Chartier, Concept Audiovisuel’s lighting designer, the MAC 401 Dual is an ideal product with distinctive features. He commented, "This fixture surprised us at first with its strength. We had to dim the intensity of the lighting. The optical quality it provides is excellent."

Chartier insisted on the need to use low-energy products for this type of event. "The MAC 401 saves considerable amounts of energy compared with other machines. Our client specified that this should be taken into account and the 401 spectacularly fulfilled this requirement."

New perspectives
Aware of the capacities of this new technology, Pierig Burgin confirmed his initial decision after using the new LED luminaire. “The MAC 401 Dual provides us with new perspectives as a result of the different visual effects it provides as well as its fast and extremely powerful zoom,” he stated. “We have also found its capacity to create movement to be very useful at a large number of shows."

As well as power and performance, the MAC 401 Dual has satisfied all manner of expectations by incorporating a wealth of other very useful functions. Its design suited the décor perfectly, a consideration that is not insignificant for the overall appearance of a stand. The fixture’s silent operation is ideally suited to the type of environment that demands peace and tranquility. The lightweight construction of the MAC 401 was also a key factor, making light work of an otherwise potentially difficult installation, due to the height from which it was suspended. Nevertheless, it is robust despite its lightweight construction.

A product with great potential
Pierig Birgin knows that the MAC 401 Dual will add significant value to his stock of equipment. His company will be able to assess the entire range of the product, which can be adapted to suit a variety of applications. This bodes well for Concept Audiovisuel, as the company provides extensive services of this kind throughout the year, at various events and shows and is now relying on the 401 to bring new perspectives to its projects. Pierig is also aware that the 401 offers all the benefits of LED technology: a high level of reliability, minimum maintenance and increased effectiveness at a reduced purchase cost.

Jean Baptiste Delacroix, Marketing and Events Manager at Poujoulat, is aware of the interest being generated for the new fixture. He wanted "strong and powerful lighting" and says he is very satisfied.
"The 401 has brought a new dimension to the stand in terms of ambiance," he says. He makes no secret of his delight at being the first in the world to have used the product. According to him, "LED is the future in lighting at these shows.”

Following its first successful appearance, the MAC 401 made another appearance on the Poujoulat stand at the Interclima show and should also be appearing at a later exhibition in Germany. Jean Baptiste clearly displays his enthusiasm for working with professionals with the most advanced technology, such as Martin: "It is essential that the European leader in chimney flues is surrounded by suppliers and partners with the same ambition as regards quality,” he stated.