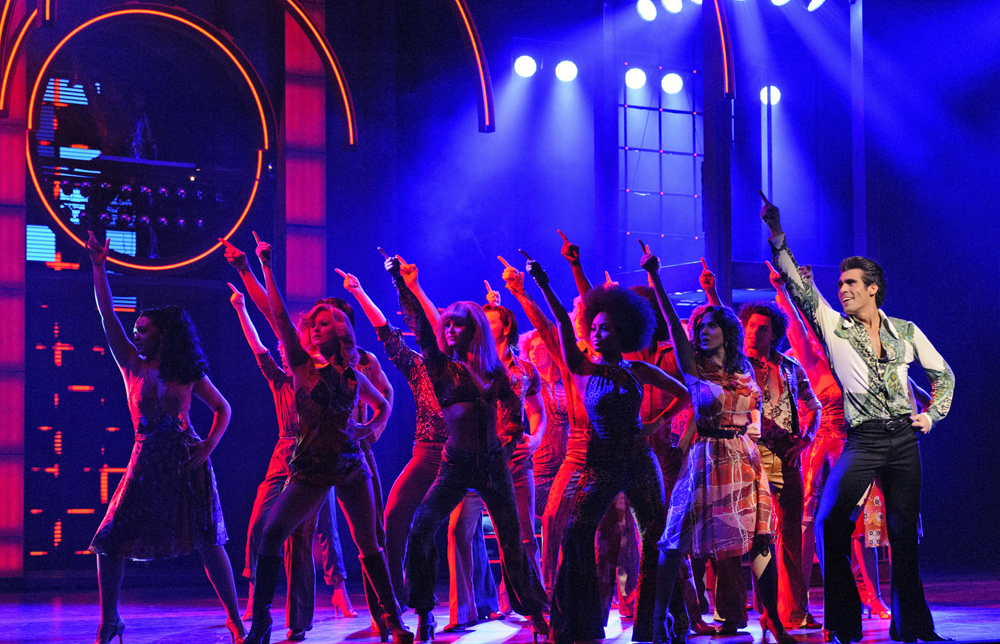 MAC Aura™ Has the Right Moves on “Saturday Night Fever”

A Dutch production of “Saturday Night Fever” is touring The Netherlands and Martin’s compact MAC Aura is being used as a workhorse light in the musical’s important disco scenes.

Lighting design is by Andy Voller who comments on his decision to use the award-winning LED wash light. “I needed a small moving head fixture that could fit within a limited space on the set and could double as a beamy effect light and a more conventional back and cross light as the set almost completely blocks the wings. Once I saw that the MAC Aura was the right size and worked as a good wash light, the Aura capability was an added bonus,” he says, referring to the MAC Aura’s ground-breaking optical system that combines multicolor LEDs with backlight color mixing.

The SNF set consists of six moving towers covered with 42 MAC Auras mounted at a height of five meters and completely visible to the audience. “They became the real workhorses for the disco scenes,” Andy says. “They work as a great beam look for those scenes as well as a good cross light and backlight for the dancers. We do of course use the Aura effect sometimes. They work great as eye candy without filling the stage with light.”

Andy appreciates the Aura’s 11 to 58° zoom, which he says can go narrow enough for good beam looks but also go wider to do a good wash without losing a lot of intensity. “With the combination of good beam control and good color mixing, I forgot they are an LED wash sometimes. What you see in the lens is more like what you are used to seeing from a normal moving wash light. No sign of the LED sources that are seen on other LED fixtures. The color mixing is superb with a wide palette from pastel tints to deep saturated colors.”

Martin MAC 2000 Performances™ and MAC TW1™ tungsten wash lights are also used on the show. Lighting supply for the tour is by Ampco Flashlight Rental of Utrecht. Produced by Stage Entertainment/Joop van den Ende Theaterproducties, the show visits 13 venues across The Netherlands over a six month period before heading to the Teatro Nazionale in Milan, Italy.