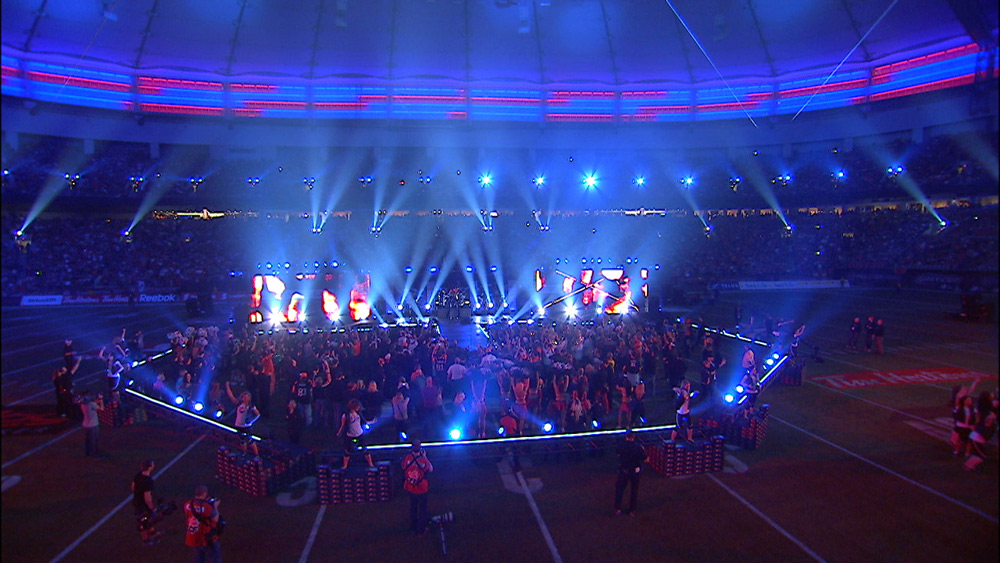 Integral MAC 101
The moving light package was supplied by Christie Lites Vancouver with the LC panels with P3 upgrade coming from Epic Production Technologies. Production and lighting design for the event was by Robert Sondergaard who incorporated a large amount of Martin’s compact MAC 101 wash lights into his design.

“Since the 101s have come out they have become integral to the shows we do,” he says. “Because they are inexpensive to rent, we are able to get large numbers of them on the show without a large impact on the budget.”

The Martin MACs were positioned at two main areas; in the seats on the railings of the vomitories and on the staging elements that rolled out onto the field. Some 38 of the MAC 101s were hung on the level 400 railings upstage.

“It is amazing how much punch we got from the 101s, even from that distance,” Sondergaard states. “They gave us lots of flash for the camera and color for the field. We then lined all the trusses with 60 MAC 101 which gave us great saturated color and strobe looks for camera.”

Not only is the MAC 101 a very capable wash light, their small size, light weight and low power consumption make them a breeze to work with. “Their switch mode power supply meant we were able to power them easily from wall outlets to distribute them around the venue, and their low power draw means we could daisy chain a number of them together off of one outlet,” comments Sondergaard. “On top of that, they have an impressive output and their narrow beam angle means you can get beams even at a great distance.”

Big MACs
The 101s were by no means the only Martin MACs on the event. Sondergaard also placed MAC III Profiles on the level 400 railings, directly in front of the stage, and used them as key light on members of the band.

“The MAC III is also an important tool on TV shows we work on – they have great output so when you color correct them to work on camera there is still lots of level to use them to key light performers. For the Grey Cup show, they gave us the light level we needed even at a 200’+ throw and mixed to 4000°K.”

On stage was a mix of MAC 2000 Wash XB and Beam fixtures used to give a big beam look from the stage. The LC panels were used to create two large LED screens stage left and right to add size to the on-field look.