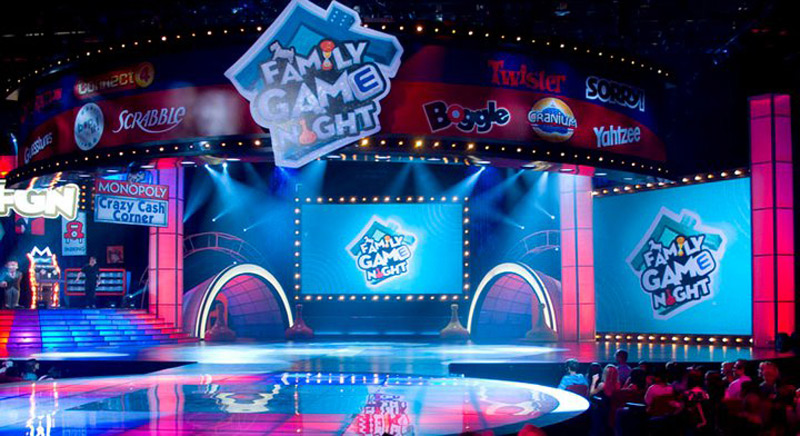 The Hub, a joint venture between Discovery Communications and Hasbro, Inc. recently called on Lighting Designer Michael Veerkamp of Team Imagination to light the show, which features families competing in life-sized versions of traditional Hasbro games.

The need for speed
“Family Game Night” was programmed by Mark Pranzini on the M1 but the show is operated on a Martin M-PC™ lighting controller with Maxxyz Wing. Pranzini, who was also responsible for training the operators, commends the M1’s functionality and overall speed. “’Family Game Night’ was all over the place and required many handles for the initial programming of each game,” he commented. “Team Imagination doesn't like to hold up production so we must work in almost a ‘Live’ mode so speed is key. The M1 gives the programmer numerous functions that are laid out logically and efficiently to accomplish the programming speed this production required. My favorite features are that it offers many live playback features, it's light, compact, and efficient.”

“We’ve been exceptionally happy with the M1,” Veerkamp adds. “It’s got a great interface and ease of programming and it uses the Maxxyz software, which we know works well. It also has a small footprint which is nice as space is often at a premium.”

Veerkamp called on 4Wall Entertainment’s new Los Angeles office to provide the M1 console and other lighting equipment for the originally produced show, which has proved very popular since its debut on October 10th. The gear list includes Martin MAC 250 Entour™, MAC 700 Profile™ and MAC 301 Wash™ moving lights, along with Atomic 3000™ strobes and other LED lighting.

MAC 301 Wash
Veerkamp incorporated the Martin MAC 301 Wash LED moving head, which he calls “truly awesome,” into his design. He also calls it “surprisingly bright with a nice, thick shaft of light that allows for another level of texture in the air.”

Another advantage is the 301’s broad color palette, he says. “With 12 or so games on each show, each game has its own look and we’re always looking for something different. The large selection of colors comes in handy. Color matching between LEDs is important as well and the 301s all matched perfectly. I was very pleased with them.”

He also likes the fact that the 301’s can go into camera mode for flicker-free illumination in TV studios. They are also very lightweight, which the crew loved, Veerkamp says.

MAC 250 Profile
Also in the rig were Martin MAC 250 Profiles. “I love those lights,” Veerkamp continues. “They are bright and get it done on a tight budget.” The majority of the Martin lights are located in the rig with a few on the deck for uplight beam looks.

Where loyalty comes from
Veerkamp was satisfied with the lighting effects, but there is another factor that he finds even more important. “Yes, the lights are great, but it’s the support that keeps me specifying Martin equipment,” he says. “We know that Martin has our back, and that’s where my loyalty comes from. Matthias Hinrichs was always available, which was invaluable, and whenever we had a technical question he was there. And as always, 4Wall took great care of us and serviced the show flawlessly.”

"Family Game Night" is a live-action, original game show in which kids and their parents team up to compete against other families for points and prizes. Within each hour-long episode, families play a variety of classic and enduring games including CRANIUM™, BOP-IT!™ and CONNECT4™, challenging both contestants and viewers with strategy, creativity and pure luck. Produced by Hasbro Studios. The one-hour series airs Fridays at 7 p.m. ET.