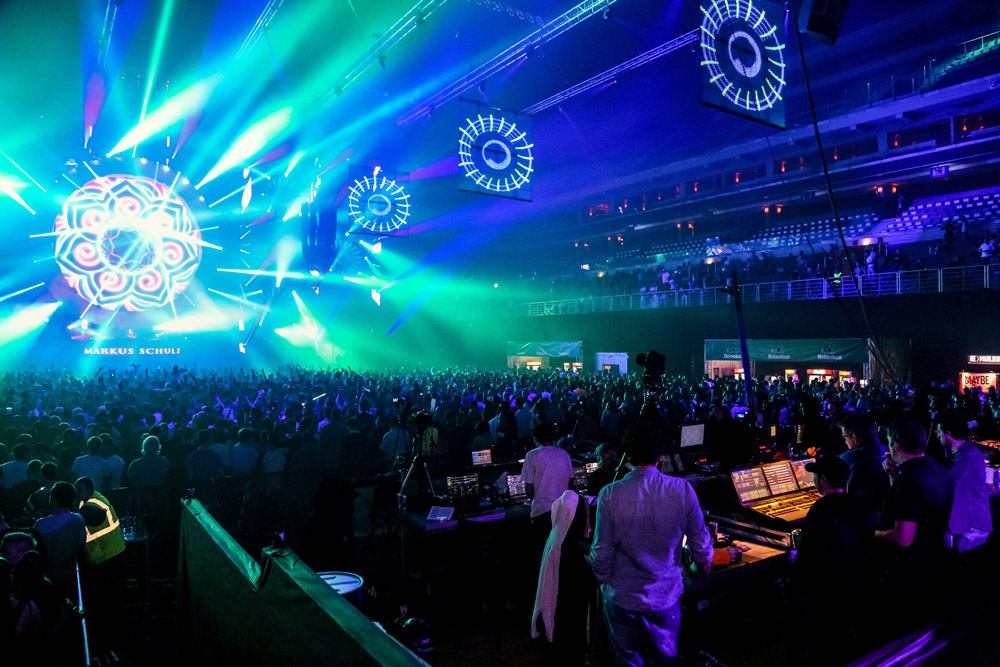 On January 19th the year’s biggest indoor trance music event in Central and Eastern Europe, Transmission “The Spiritual Gateway,” took place in Prague at the O2 Arena with production support from Martin Professional’s distributor in the Czech Republic T SERVIS.

Martin gear played a large part in the show with the new MAC Viper Profile™ at the heart of an energetic lighting design. “The Viper was selected for its power and ability to punch through the venue for clear and visual lighting effects,” states T SERVIS Production Manager Randy Young.

Hanging on a series of eight vertical trusses off the upstage edge, 28 Vipers were placed across the back wall “to help produce and pronounce the focal point of the center stage while being able to shoot out in to the house for multiple visual accents,” says Randy.

Over 300m2 of Martin LC Series LED video panels, also provided by T SERVIS, helped shape the ambiance in the venue while a host of other Martin gear provided dynamic looks from a number of circle trusses hanging behind the stage and in the house. These included MAC 2000 Profiles™, MAC 2000 Washes™, MAC 250 Beams™, MAC 301 Washes™, MAC 700 Profiles™, MAC 101s™ and Atomic 3000™ strobes with Atomic Colors™ scrollers. Jem smoke machines were used for mid-air projection canopy and atmospheric effects.

Lighting, laser, audio, pyro, video and pre-prepared video intros for the DJs, as well as live inputs, were handled by a complete show control system. Multiple analog and digital time-codes ran in a time-based sync, an event-based sync and by utilizing a MIDI based system for triggering events live. “We were able to create the WOW factor that this audience has come to expect from a show like this,” Randy concludes.