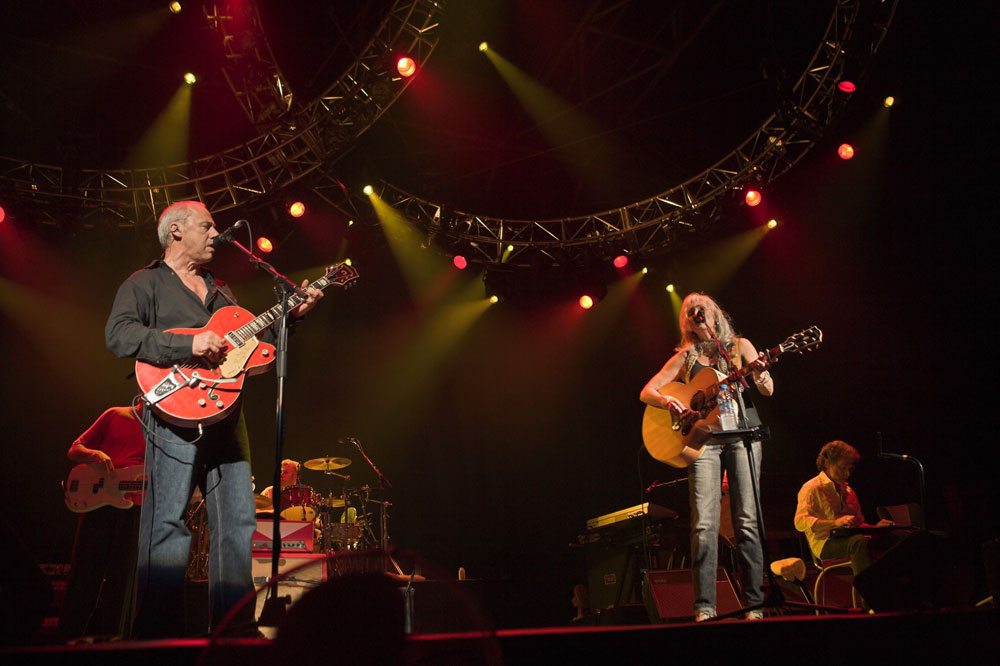 Bandit Lites has supplied Martin lighting, rigging and crew for the UK, European and US legs of Mark Knopfler’s and Emmylou Harris’ “All the Roadrunning” tour. The tour promotes the collaborative album of the same name from the Dire Straits frontman and 11-time Grammy award-winner, Emmylou Harris. The pair has been quietly compiling a treasure trove of duets for seven years!

Lighting designer Simon Tutchener was asked to produce a simple, classy look for the stage – with no video production onboard – the visual scenography was all down to lighting - and he in turn again asked Lester Corbin at Bandit to help realize his design.

The design was based on using two very elegant 8 meter diameter A-type interlocking circular trusses – which Bandit had custom fabricated. Tutchener wanted an architectural feel to the stage that defined the space. The circles ‘symbolized the fusion of two of the greatest living performers and creative forces in popular music, and also celebrated the existence of two very independent individuals in a parallel universe.’

Lester Cobrin comments, “Simon called me and explained his concept by interlinking the circular trusses, as the main focal point of his design, which I thought unusual, interesting and very refreshing. Once rigged to trim, the circles gave off quite an illusion and that was fantastic.”

LD Simon Tutchener
Tutchener had designed Knopfler’s very successful 2005 tour, with a practical user-friendly rig – also supplied by Bandit and featuring Martin lighting. “This time, I wanted something completely new and totally different,” he explains. Tutchener has worked with Knopfler for four years now and the two have a good line of communication.

As soon as Knopfler approved Tutchener’s initial visual, Bandit ordered the fabrication of the second circular truss - already having the kit to build one – from Total Solutions Group. Each circle is suspended on four points. There’s also a ‘dog legged’ cable bridge to neatly lift cables off the circles which ran offstage, plus a rear lighting truss with a fiber optic star cloth upstage, concealed behind a pair of blue travera tabs.

The two circles were physically identical but there was nothing symmetrical about them at all. The stage right circle was rigged at an extreme acute angle with a 5 meter rake from front to back, while the stage left was hung at a flatter and more obtuse angle.

MAC 2000 Rig
The system consisted of 30 Martin Professional MAC 2000 Profile moving lights, complete with Tutchener’s own designed gobos, and 22 MAC 2000 Washes of which 10 were positioned on the ground behind the band. LED lights – eight per circle – were used for truss toning. In addition to these were 64 Parcans for general cover, band and stage washes, plus four front of house Lycian 2k followspots.

The circles also give Tutchener plenty of latitude in terms of fixture focusability – far more that if he’d used conventional straight trusses. The rig went up within three hours and down in just over an hour, so proved a very expedient and efficient system, and packed neatly into one truck. “And the crew loved me for it,” quipped Tutchener.

Bandit Standard
His crew from Bandit was Mick Freer, Ewan Cameron and Martin Garnish. Simon comments: “I have a great relationship with Lester and he always looks after me. Bandit takes great care in what they are doing and always listens and takes onboard what you’re trying to achieve – which is great!”

After the UK and European legs, Cobrin liaised with Richard Willis at Bandit US to oversee the transition but it didn’t end there. Due to the US routing, it was logistically impossible for the gear to reach LA from Minneapolis in time for the last three shows so Bandit called on their friends at West Coast Lighting to duplicate Tutchener’s system.

Cobrin comments: “The communication between myself, Simon, Kevin Hopgood (PM), Richard Willis and West Coast Lighting was a seamless success. The attention to detail was paramount, even down to leapfrogging Simon’s custom gobos over the planet!”

In the US, Ewan Cameron took over board operating and lighting direction while Simon fulfilled other commitments in the UK. Tour manager was Tim Hook and the production manager was Kevin Hopgood.