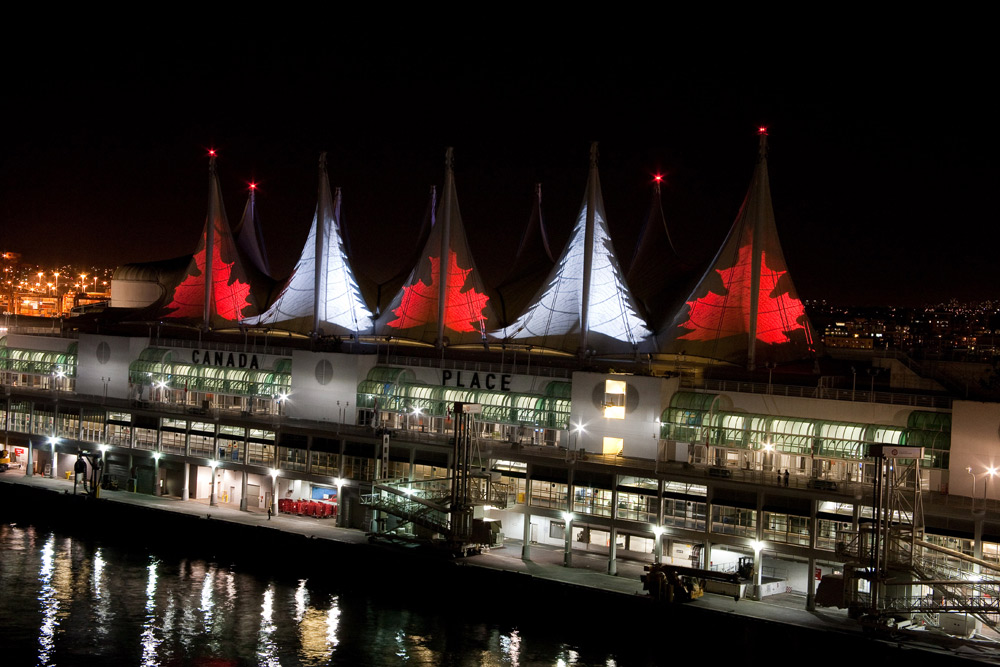 Exterior 1200 and Moment Factory
Designers of the visual event are Moment Factory of Montreal. The installation consists of ten Martin Exterior 1200 Image Projectors™ illuminating five sails; two carefully aligned Exterior 1200 projectors for each of the 90' tall by 160' wide sails. The Exterior 1200s, which were supplied locally by Christie Lites, are mounted on 10 foot poles at a distance of approximately 90-100 ft from each sail.

“It was an eight month process to design and realize the light show on the sails but the result has exceeded my expectations,” comments Gabriel Pontbriand, multimedia designer at Moment Factory. “Originally we thought of using video but the cost was prohibitive. We found the Martin Exterior 1200 through Christie Lites and recommended them.”

Pontbriand thought that brightness might be a problem, especially at such a long throw, but once he saw the illumination on the sails his fears were allayed. “Our team was very impressed by the brightness of the fixture for this application,” he says. Pontbriand also liked the fact that he could find everything he needed in one fixture.

Symphony of light
The lighting brief for client Canada Place Corporation consisted of “a dynamic light show highlighting Canada Place's iconic sails - a luminous sculptural intervention aimed at celebrating the unique architectural attributes of the site, achieving the aspect of a timeless jewel.”

Using custom gobos with different styles and textures, Moment Factory has created a symphony of light and spectacular visual backdrop.

“Accurate 3D architectural modeling of the complex sail structures was not possible, and led the graphic design team to apply a test gobo grid pattern to the sails in order to record the precise location in space of imagery being projected,” Pontbriand explains. “This grid survey allowed Moment Factory to analyze and communicate an accurate scaling to our graphic design team for the creation of the final gobo content.” Colors and graphics change throughout the show with 20 existing LED luminaires used to enhance the masts.

Challenging, stimulating experience
Moment Factory has created an ideal symbiosis between the medium of graphic design and lighting design, this time to enhance an iconic architectural feature. “The experience was extremely challenging and stimulating. The challenge to cover the vast eye-catching roof of the Canada Place Convention Centre was formidable and was achieved with only 10 fixtures! We’re pleased with the technical support we’ve received as well. Teamwork and great communication flow between Canada Place Corporation, Moment Factory, Christie Lites, Rosco and Martin made the project a success. We are very proud of the installation,” Pontbriand concludes.

Welcomed the world to the 21st Winter Games
Installed in late November of 2009 in time for an inaugural Christmas show, the Exterior 1200 installation runs year round and can be customized for national holidays. Christmas at Canada Place featured the “Sails of Light” every morning and night from December 6 – 31 and each evening during the Vancouver Olympic Games, the illuminated sails provided a dynamic backdrop for the multitude of worldwide broadcasts and other presentations that took place from the media centre complex.

According to Pontbriand, after 6 months of daily operation, often in the rain, the fixtures react very well and the brightness has not diminished.

Canada Place is situated on Vancouver’s Burrard Inlet waterfront and is home of the Vancouver Convention & Exhibition Centre, the Pan Pacific Hotel and Vancouver's World Trade Centre. It is also the main cruise ship terminal for the region. The building was designed by architect Eberhard Zeidler.

Moment Factory
Moment Factory is based in Montreal, a creative city that feeds the videogame, entertainment and design industries. In its studios, Moment Factory hijack technologies, imagine interactions, and build moods. Founded in 2001, Moment Factory has realized more than 300 projects worldwide for clients such as Cirque du Soleil, Bell & Disney. It just finished permanent interactive installations in Dubai, Montreal and Calgary. www.momentfactory.com