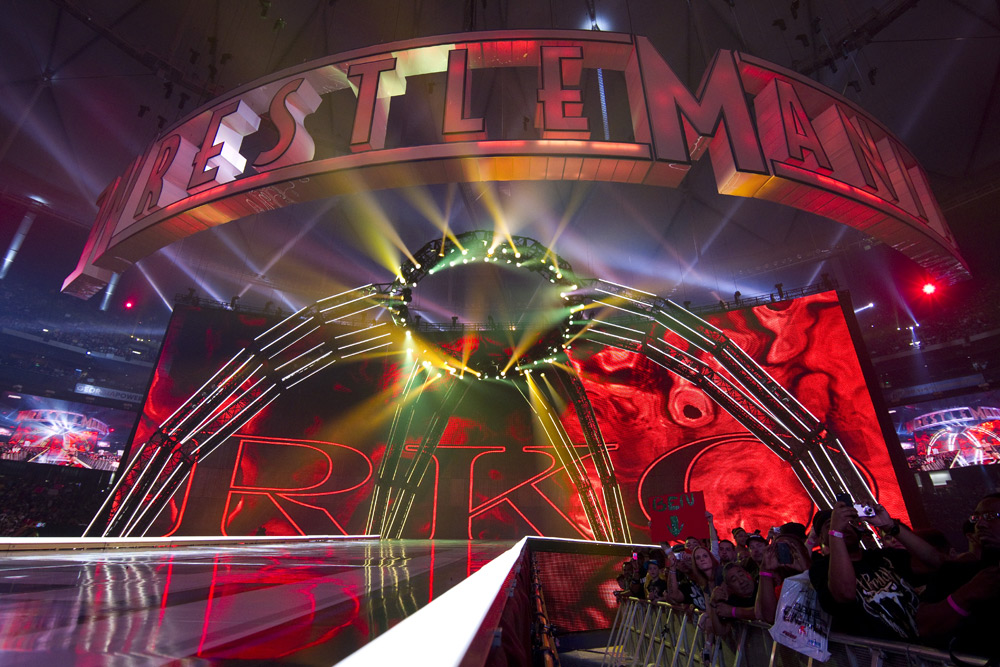 With a pay-per-view broadcast to 35 countries and an in house audience of over 70,000, WrestleMania is serious sports entertainment. Produced by WWE (World Wrestling Entertainment), the yearly show has become the pinnacle event in sports entertainment. By weaving together feuds and plots into engaging storylines that even TV soaps can learn something from, tension builds and anticipation heightens, culminating in a must-see event.

Visually overpowering
Long time production designer for WWE is Jason Robinson who taps into his years of experience to light WWE events year long. Jason works with WWE executive producer Kevin Dunn on design and themes for WrestleMania events with this year’s look less thematic and more from the world of high tech - but awesome visual eye candy nonetheless.

Digital cycloramas
Playing a major role in this year’s set design were Martin Professional LC and EC Series LED video panels, used as digital cycloramas on stage, lining the front of the stage, and along a catwalk leading to the ring in the middle of the Georgia Dome. The sheer number of Martin LED panels involved made it the largest single Martin LED panel event ever.

The most prominent use of the panels was a huge 180 foot long by 65 foot tall video wall backdrop that arched 180 degrees in a true cyclorama curve. The huge video screen was positioned on an entrance stage at one end of the arena where the various heroes of the ring received a grand theatrical introduction.

The screen portrayed a variety of visuals including the wrestlers themselves and other graphics composed by WWE Senior Graphics Designer Dan Cerasale. The graphics were typically newly designed looks from merchandise and other branding imagery, fresh looks that fans hadn’t seen before on weekly WWE events.

P3 processing
Graphical processing of the LED screen imagery took place via P3-100 System Controllers, Martin’s award-winning video processor that allows for full control over the video signal before the image is displayed on screen. The P3-100 allows video to easily integrate with a lighting system by treating LED screens like lighting instruments with direct cue-by-cue control of brightness, image rotation and position, color temperature, etc. and is a huge time saver by aligning and addressing the entire screen automatically.

Crab legs
The entrance stage featured a clean design compared to past years with one important exception, a huge multi-legged Stageco ‘crab’ truss positioned in front of the LC Series screen. The legs of the crab were fitted with a skin of Martin EC-20 LED panels, which added depth to the stage and made for a stunning 3-dimensional feel. In order for the legs to stand out visually, Jason ran opposing graphics on the LC wall and the EC legs.

“The panels fit in well and we had no problems with them, and we didn’t just hang them vertically,” commented Jason on the panels’ mounting versatility and user-friendly design that requires no separate rental structure. “I’ve used the LC Series before and have been using Martin gear on WWE for a while, but this was my first time using the EC panels. They were very durable and held up well.”

Large MAC rig
The Georgia Dome is a huge space to fill with color and light and it takes a large amount of automated luminaires to do it. A huge part of Jason’s automated lighting package was nearly 500 Martin MAC moving heads that he used to light the building, columns, ring and audience.

“Upstaging did a great job and was able to get me all the panels I needed. Everything went fantastic with no problems to speak of,” Jason concludes.