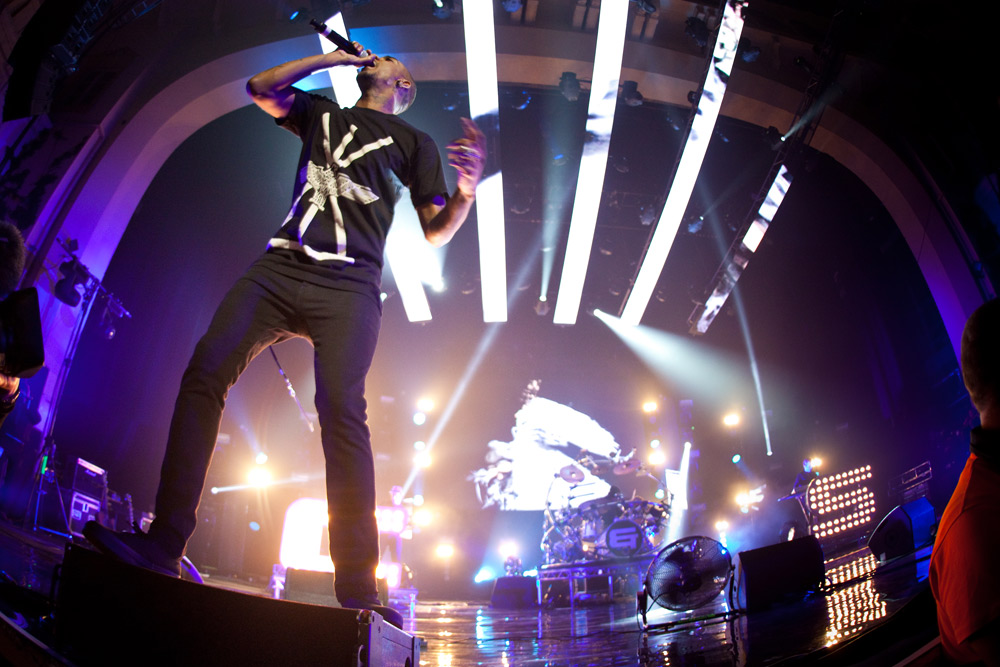 “I saw the EC-10 at PLASA and was so impressed with the richness of the color and contrast,” Carson comments. “I have previously used the EC-20 and like the simplicity in which it goes together, the speed it can be rigged and the weight being so light.”

For the UK leg, Carson placed a 6-meter-wide EC-10 screen upstage center with six EC-20 towers left and right (two each at 5 m, 4 m and 3 m high). At the Brixton show, five spine trusses were added, each 10 meters in length with EC-20 panels hung on the underside using the new EC Series panel clamp, which allows for creative panel orientation in any position.

“The EC-10 was used for the central screen to feature vocalists who were not on the tour and the higher resolution gave a crisp look to the faces. The EC-20 was then used for the more graphical content on the truss towers to make the stage appear bigger,” Carson explains.

The EC-20 towers were staggered upstage/downstage instead of lying flat along the back wall. “This gave the stage a sense of depth and the EC-20 panels helped to make the screen seem bigger with content mapped over them.” For the mainland Europe leg the LED setup dropped in size to just the central EC-10 screen hung on a ground support truss goalpost.

2 minutes and 54 seconds
Carson cites the speed at which the crew could rig and de-rig the panels as exceptional. “We managed to dismantle the main EC-10 screen in 2 minutes 54 seconds whilst in Swindon,” he says. “Now that is impressive! The ease of use really helps with the integration of lighting and video and on this scale of touring can allow crew to be used more efficiently than just focusing on one element.”

Video content for the tour was created by The Light Surgeons led by Chris Allen. The content makes the show and is tightly sync'd to the music, says Carson, with the server locked to timecode. Lighting and video supply is by HSL while Adlib supplied the extra lighting equipment for the Manchester show.

Carson sends a big thank you to Mike Oates and Rupert Reynolds and the team at HSL who helped put the tour together, stating, “As always, HSL provided friendly professional service with great technical whilst on the road. Also, thank you to the techs Chris Roper, Marc Callaghan, Dan Oswald and Giani Fabricio, as well as Toby MacKnight from BPM, who enjoyed getting involved with constructing the screen!”