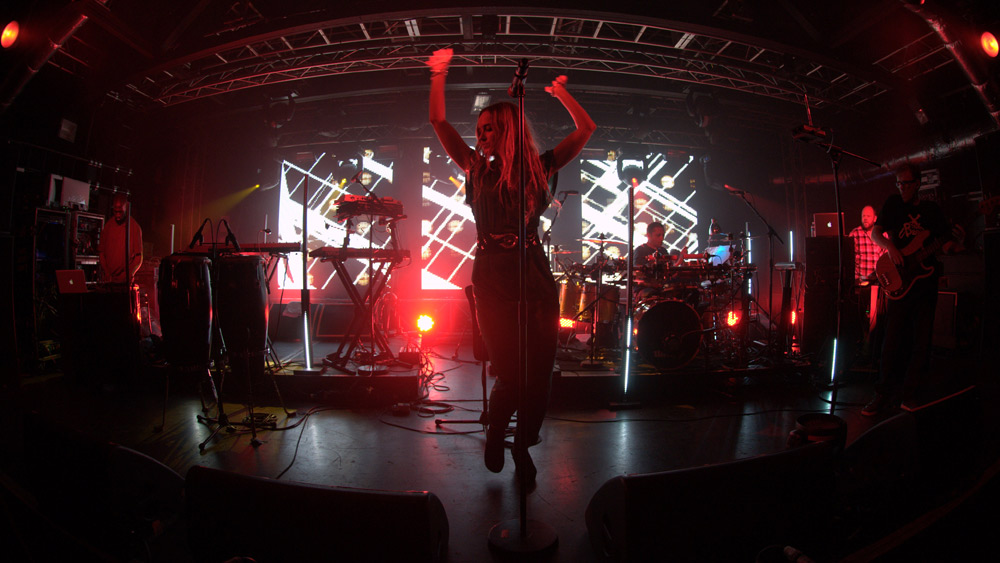 Ben, who first previewed the EC-20 video panels at the PLASA exhibition in September, was looking for “a lightweight, fairly high resolution, modular LED system that I could use on Leftfield and on some other shows. David Stewart at Martin gave me a demo and I really liked how it looked. I was also very impressed by the control software of the P3,” he says, referring to Martin’s advanced P3-100 video processor.

Following a series of successful summer festival performances, Leftfield played a number of dates in the UK and Ireland in November and December. Ben was brought in by lighting designer Jamie Thompson, primarily to oversee the video playback system and content. After figuring his video needs, he contacted video services company Picture Works Ltd. of London, who provided the EC-20 panels for the tour.

The need for flexibility
“Over the summer festival tour we had a different screen each show so I designed a system that was quite versatile, reconfiguring the content for different screen configurations and resolutions,” Ben explains.

The design for the UK tour featured three EC-20 screens, or strips, each screen five panels by five panels. A center screen was flanked by a screen on each side with a one panel gap between screens.

The ability to easily redesign the panels was a must. Ben continues, “As the space in the academies varies so much we needed a screen that we could reduce in size and reconfigure easily, preferably without too many changes in the media server. In some venues we reduced the three EC-20 strips to four panels by four panels.

“In a lot of the venues we were restricted by weight load on the back truss, especially with the four lighting ladders with lights which we hung between the gaps between the screens. David showed us how we could ground stack the screen upside down and after a meeting with Picture Works and lighting rental company Colour Sound we spec'd three x-shaped footers and some box truss for the screen to stand on in order to get some height off the stage.”

EC-20 LED video panels
The EC-20 – 20 mm pixel pitch panels that deliver an impressive 4,000 nits of brightness – offer several advantages over other types of LED video panels. Designed for rapid setup and teardown, color and brightness is calibrated for each individual pixel and the panels feature an integrated curving system that enables a panel to panel angle of +/- 20° with maintained pixel pitch.

“The build quality of the panels is good as well,” Ben comments, “especially since each panel is only a little over 10kg. The metal work is nicely finished and the handles and mechanisms feel strong.”

In some of the venues where space was restricted, touring LD Chris Steel, who handled all the programming and operation around the EC-20, placed moving lights on the floor behind the screens and utilized the panels’ transparent element. “As there are no cables running up and down the back of the screen, it is much tidier than other screens.”

P3 precision
Lighting designer Jamie Thompson’s original concept design involved three pyramid-shaped strips so that graphical content, designed by Oli Sorenson, changed between sections of three or six or all panels. It was therefore important to retain the shape in the new screen design and also to work with the gaps between the screens in which the lighting ladders were hung.

Ben explains, “We had to get enough of a virtual gap in the screen software to keep the content flowing smoothly from left to right but not so much that we would lose important pixels of the content. It was really easy to shift this pixel by pixel with the P3 to get the right result.”

All media content across the panels was driven through Martin’s P3-100 System Controller, an advanced video signal processor with the ability to micro-align the LED display while treating the screens like lighting instruments through direct DMX control of brightness, color, pixelmapping and more.

The P3-100 also makes setting up an LED screen straightforward and intuitive. Ben comments, “Being able to put any panel in any position and easily re-address them is a great help on the load in and out as we don't have to complicate each box with labeling or a position. We can just get local crew to help by grabbing any panel from the boxes when building and de-rigging the screen.

“Design-wise the software is excellent, it is really user friendly and I have been able to do all the scaling and shifting in the screen software with a good preview of what is happening and without any need for an image pro.”

The EC-20 screen content for Leftfield ran off timelines that were triggered by MTC with content also sent to LED strips. Ben varied the content between custom graphics, block shapes, and colors and also relayed and reshaped the content on the main screen. “This gave the video more of a depth on stage and also more of a live feel as it is operated and therefore had a less quantized feel to it.”

A job well done
The tour was a success on many levels and Ben gives kudos to the support he received. “David Stewart went way beyond the call of duty and his knowledge of the EC-20 and the P3 software was invaluable. He was with us through some long hours in Picture Works’ warehouse, prepping the tour and building the screen and also at the first gig where we had a lot of decisions that needed to be made.

“Also, the video wouldn’t have been anything without Oli’s content. I can easily say it is some of the best I have seen. Each track had a different look that was sharp and responsive but there were also themes that ran throughout the show across different tracks. The use of shapes and keying images over and through each other was top notch. The more I watched the content the more I saw in it and the more I liked it. I am still not bored of it months down the line.”