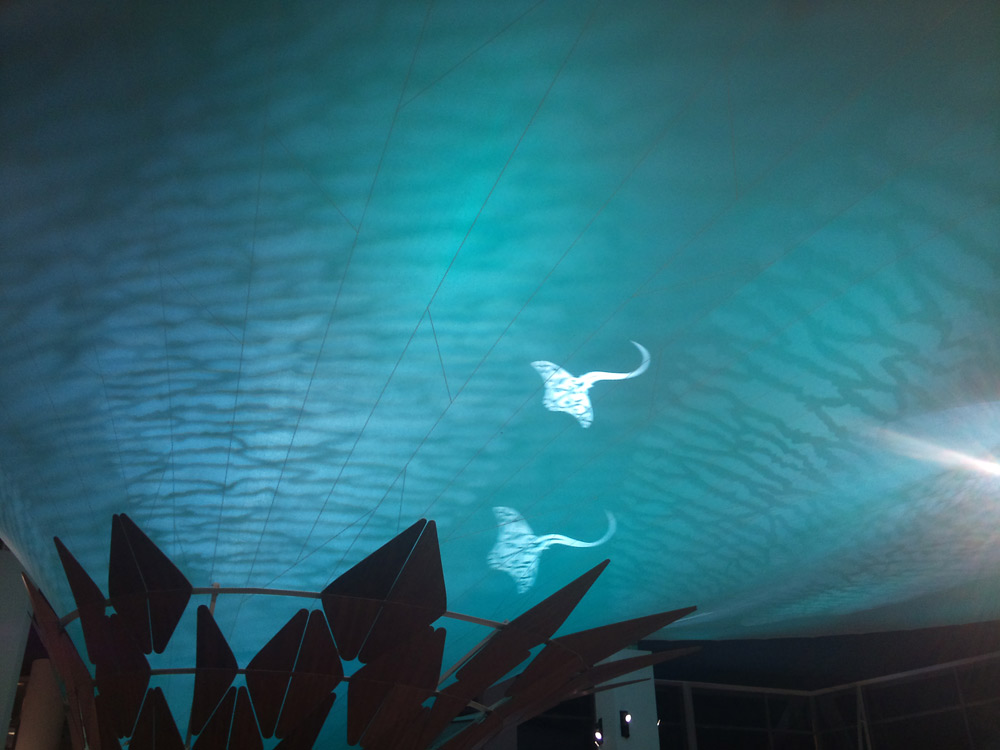 At the heart of the new retail departures area at Auckland International Airport in New Zealand is Pou Manawa, a huge tree of architectural fabric onto which color and traditional Maori designs are reflected using Martin Exterior 410™ wash lights and Martin smartMAC™ image projecting moving heads.

Ignite Architects developed the idea of a “heart” space – an interactive and engaging area that people could gravitate to – and, as much of the imagery symbolizing what New Zealanders hold dear is focused on trees, the Pou Manawa was born.

The Exterior 410s, an award-winning RGBW color mixing fixture with pre-mixed LEDs, provide a wash of color across the canopy. It is an ideal luminaire for installations like Pou Manawa in which the projection distance is short.

“We had an exhaustive period of early testing to get the best fixture for the projection,” says Chris McKenzie of Martin distributor Kenderdine Electrical Ltd. “We had other color changing fixtures specified but when the Exterior 410s became available we changed the specification to use them. The 410s were the perfect solution for the wash units and whilst an indoor installation, the passive cooling on the units was a major bonus.”

Working with the Exterior 410s are smartMACs, a bright profile light and image projector with six indexable rotating gobos. The designs float across the complex patterned internal surface of the tree in a continuous 360-degree rotation.

“The smartMAC won out for its long lamp life and low maintenance needs,” states McKenzie. “We had a large area of south-facing glass pouring light into the area and after treatment of the glass, the smartMAC was able to generate enough light to do the job successfully.”

Twenty-four smartMACs and a like number of Exterior 410s are used in the installation, which runs 21 hours per day, 365 days per year. Programming was done on a Martin Maxxyz PC™ and Martin M1™ console with initial design and renderings completed using the Martin ShowDesigner™. All gobos are Apollo stock steel and glass or custom glass.

There are six main themes that are reflected through the 36-minute cycle of Pou Manawa: Ocean, Flax, Fern, Night Sky, Sunrise/Sunset and Pohutakawa. The intricate designs were created by Kingi Gilbert and depict New Zealand carvings, nature and birds and relate to travel, flight, voyaging, movement across vast expanses, oceans, airways, guidance and hospitality.

The project, a collaboration between a number of players, won an excellence award in the 2011 New Zealand IES National Lighting Awards and has proved quite popular with travelers.