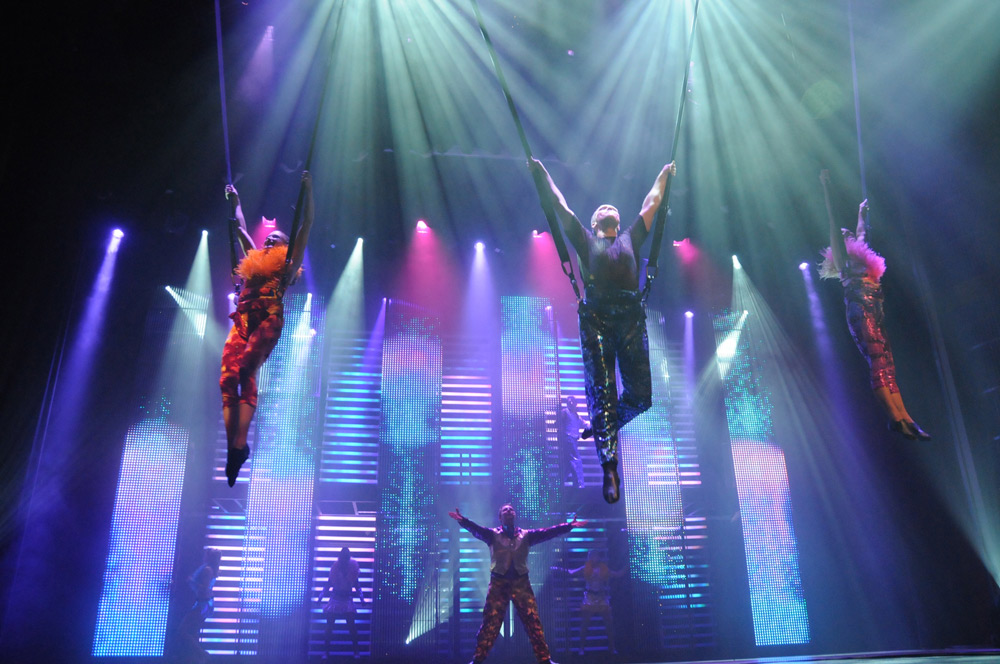 McPherson avows, “I like Martin products and I have used them for years. We use them in all of our shows actually. Martin panels are robust and built well, so for the guys who have to load them in and out, they hold up well.”

The Eclipse is the third new vessel in this line of ships, following the Solstice and the Equinox. POET is designing and producing the next three shows on the new cruise ship, the Celebrity Silhouette, which is set to launch in 2011. McPherson says, “I’ll use them on the next ship too because they worked out so well.”

LC panels provide flare
Martin’s LC Series is a semi-transparent, modular system of LED panels, perfect for displaying video and images. It knits together light, video and set design, offering entirely new possibilities for staging. McPherson states he used them in EDGE because he was looking for a real rock and roll look for this production. ”The LC panels gave me that big powerful blast toward the audience that I was looking for in the show.” Incredibly luminous at 1800 NITs, he says, “I love the brightness - really awesome! That, coupled with the transparency of the panels, really enabled me to create unique looks on the stage and the set.”

McPherson explains that the shows load in and out weekly, indicating, “It feels like being on tour for five years!,” which is why he emphasizes, “The other big reason to go with Martin LC panels is the durability and the ease of setting up and striking.” Martin’s LC Series are interlocking lightweight panels that can be evenly joined for a seamless image and installed in any orientation. The modules are easy to handle which, as an added bonus, assists in cutting cost and time.

The LED panels were attached to the set and tracked up and downstage, allowing them to be the basis for all of the looks in the show, according to McPherson.

Martin performance
While guests are enjoying the luxurious comforts and service traveling with Celebrity Cruises, Martin lighting solutions are being employed to create a glamorous sensation. When asked about their performance, McPherson exclaimed, “They are holding up perfectly and performing very well!”