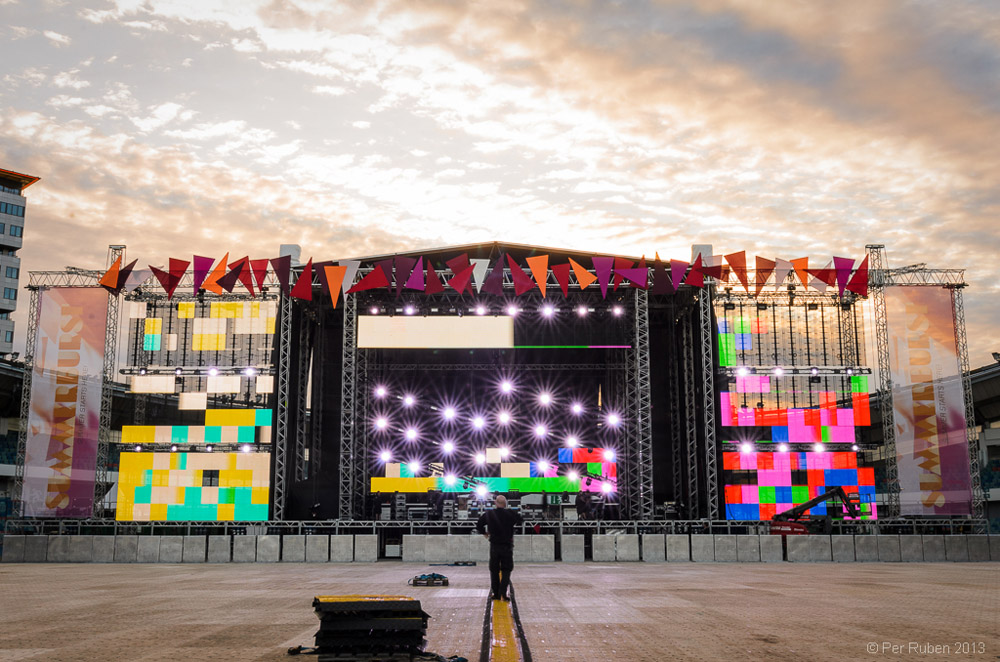 Daniel Rüdén: “I would say the MAC Aura is by far the best LED wash on the market and due to its light weight and great brightness, it was an easy choice for us. Tobias designed some great rain covers for the Auras, which made it possible for us to care a bit less about the weather and instead focus on the show.”

Top-name DJs at this year’s Summerburst included David Guetta, Sebastian Ingrosso, Axwell, Steve Angello, Alesso, Steve Aoki, and Hardwell. “The crew and I got a lot of compliments on the design and setup as well as the choice of fixtures,” Daniel says.

Because most performances at Summerburst take place while the sun is still up - and even when darkness does fall it is not totally dark - lighting fixtures had to be powerful enough to use in both broad daylight and after sunset.

“The MAC Aura really did an amazing job there,” Daniel commented. “The look of the fixtures and lenses themselves are usable during daylight, and when darkness comes the zoomed beam was almost as strong as the [beam fixtures] next to it.

Daniel says that they always struggle with weight limitations but with the MAC Aura’s light weight they were able to use more fixtures and still keep the brightness and functionality.

“We hung trusses with fixtures in between the LED panels on each side,” he explains. “To be able to do that we had to use a fixture that wasn´t too heavy but one that would still do the job. Once again, the Aura fit perfectly. Same thing regarding all the moving trusses; the Aura is so small and effective that we could put moving trusses close to each other and create great looks for each performance.”

Tobias Borén has served as head light designer for all the Summerburst shows since the events inception in 2011. “Together we design the look of the production and then Tobias puts his final touch on the lighting with an amazing result,” Daniel states. “I´ve given him free reign to choose the fixtures best suited for EDM and the festival. We´ve also put together a great lighting crew that makes our ideas happen and thanks to them Summerburst is a real pleasure to work on.”