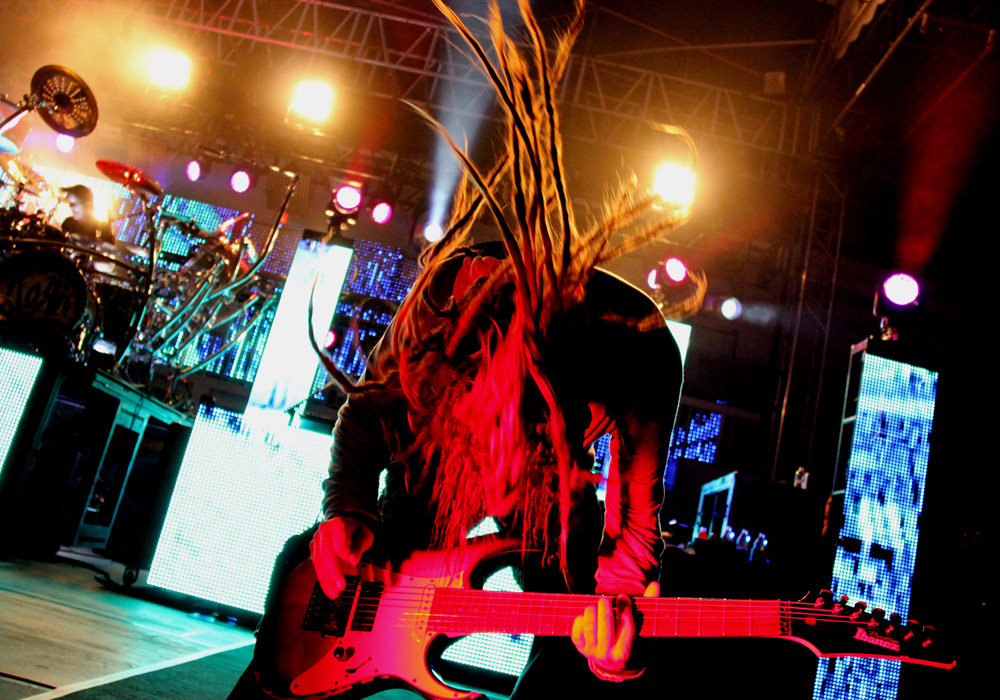 Bullock describes the new album as a reinvention of the band and the tour as the first in years in which Korn has taken any production out on the road. “It is their return to a production show and we’ve worked with the band members to create the project’s final designs,” he says. “We are really scripting out the usage of video, and even the usage of colors, as the set progresses every night.”

“When I first saw the Aura and saw its capability, I knew it was the new fixture I was seeking,” states Bullock, who has been involved with Korn the last two years and designs and directs all visual aspects of the show. He also handles all lighting programming. “This being a tour in smaller venues, the Aura was powerful enough and small enough that I could design the entire tour based on what I thought I was going to get. I was blown away that it delivered on all its promises and more.”

First US tour with Aura
Bullock was one of the first in the US to preview the Aura – a full month before its official US release – and consequently contacted John Bahnick and John Huddleston at Upstaging about getting some for the Korn tour. As it turned out, Korn’s first show aligned to the day with the MAC Aura’s US release.

“The Aura has a number of features that were critical to enhance the new direction the band was going, Bullock explains. “ The first is the unique quality of the beam itself. The premixed output beam leaves a beautiful color wash with no visible pixilation issues. The second is the internal LED backlight that allows an entirely new way of using fixtures. The built-in combination effects using both the internal and external effects are unique. Korn’s new digital edge is complemented by high-speed beam functions, color changes, and beam timing to match the rapid beats and changes throughout.”

Bullock calls the Aura’s 11 to 58° zoom fast and consistent and uses it to great effect. “With just a few lights you can flood the entire audience, and bouncing between the internal and external effects with the zoom moving allows for a new range of eye-candy effects,” he says.

He also draws comparisons to Martin’s quick and compact MAC 101. “As with the new 101, the Aura is incredibly fast and agile. Interestingly enough, I frequently added time to the lights because they were moving so much faster than the other fixtures in the rig. It’s a lightweight fixture without the lightweight output. They also take up zero space, ride six in a box and like the 101s can be chained together. All of this is important on a tour where truck space is at a premium.”

EC, LC video panels
The idea to incorporate video into the show came from Korn’s lead singer Jonathan Davis with panel details and layout hashed out in conjunction with Bullock while touring Asia.

“The combination of the EC-20 and LC balanced out perfectly,” Bullock says of Martin’s 20 mm and 40 mm pixel pitch LED panels. “All of the floor towers and video in front of the backline needed to be small and unobtrusive and the EC-20 was the only product with the resolution and modular design to fit the bill.”

The largest single screen is 40' wide and hangs off two lighting trusses with the lower resolution LC panels placed all the way upstage so that all of the LED screens appear the same visually.

“When programming the video sections of the show, I used video as a light,” Bullock says. “It wasn’t a matter of content first then the lights, or vice versa. When I programmed and designed it, they were built together and being controlled from one desk gave a very tight feel to the entire show. It was one concept, one vision and the final product I think reflects that. It is something that is hard to explain. In my time working with Nine Inch Nails this was something we tried and succeeded in refining, to have a complete tightly knit show.”

“The EC-20’s modular design has made this a very fast and easy show to build and take down, and the ease of the P3 processor to configure and test the system has proved invaluable,” comments Bullock. “The quick adjustment to the mapping system has allowed the floor towers to be moved everyday as needed. It only takes moments to correct the total image over varying screens of different types whereas in the past this was a big issue to correct. The P3 has made this a trivial problem.”

Upstaging
The entire lighting and video package for the “Path of Totality” tour was supplied by Upstaging, Inc., whom Bullock once worked for. “John Huddleston, John Bahnick, and Chuck Spector have always gone above and beyond the call of duty to make any show I've designed a perfect project,” Bullock says. “Getting the Auras in time for this project took everyone at Upstaging and the team at Martin - Gary Mass, Scott O'Conner, and Noel Duncan - working together. It wouldn’t have been possible without their effort. I think everyone from both parties who have seen the final project can agree WE all pulled off a cutting edge project.”

Bullock praises the Upstaging lighting and video crew of Crew Chief Mike Ponsiglione and Troy Smith, who handles dimmers and control. “It’s an outstanding crew from Upstaging and I value highly the input of both Mike and Troy. It was great to have just the small team of us do a cutting edge project, something all of us had wanted to do.” Bullock reports that every piece of gear has had a 100% performance rating with no spares used, video gear included.

Ko-operation
Bullock concludes by stating, “This project is a perfect example of one of the ways our industry is developing. The synergy of lighting and video designed together and run together is a demonstration of what is possible with the new technology available. Three people are doing what would have taken five in past shows, and lighting and video are once again blurring the line between departments. It is possible to push the envelope of what can be done without having to spend 60k a week. The co-operation between manufacturers and lighting companies allows people like me to do what we do best - design. This show is for everyone who made it possible.”