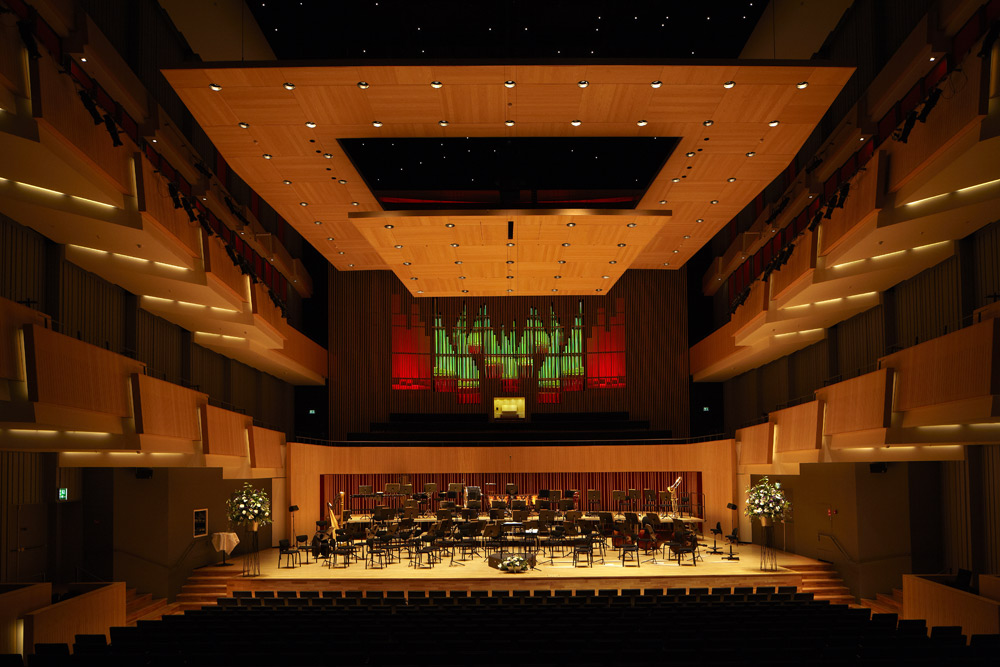 In the autumn of 2010, Denmark’s Aarhus Symphony Orchestra was the proud recipient of a beautiful, new concert organ that now graces the Symphonic Hall of the Concert Hall in Aarhus. The pipe organ is a stunning piece of craftsmanship and was built by one of Europe’s notable organ masters, Orgelbau Klais of Bonn, who have provided pipe organs for famous concert halls all over the world.

Over 100 meters of Martin LED strips mounted on the back of the wooden slats light the organ pipes (from a distance of only 15cm!) while mounted vertically at the bottom of the slats and lighting the lower conical part of the pipes are Martin Tripix 1200™ and Tripix™ 300 LED linear luminaires.

“It was important for us that the organ be an integral part of the hall,” states Aarhus Symphony Orchestra Music Director Palle Kjeldgaard . “Although the hall was built 3-4 years before the organ was installed, the space that the organ occupies was there from the start.”

Colorful complement
The organ is ‘hidden’ behind a facade of wooden slats with every second slat removed where there are organ pipes.

“With the help of the Martin lighting, the organ can stand out visually, depending on the organ's role in the concert,” Kjeldgaard says. “An organ of this size can play all the notes and the light complements this perfectly. With the possibility to make any shade of color, we can create an expression that fits the music.”

The Martin lighting was a suggestion from the builder of the organ himself, Philipp Klais. "Lighting pipe organs is a difficult task as pipes react to even slight temperature changes with a significant change in tuning pitch,” he says. “Modern LED lighting offers new possibilities to enhance the shiny beauty of organ pipes with sometimes dramatic effects. We are extremely pleased with the result in Aarhus. It has been a great experience to develop the system now installed together with the Martin team."

The lighting system is only used when the organ is in use. The Martin lighting was supplied by Martin Professional Scandinavia with lighting design by Martin Professional Scandinavia’s Anders Birch. “It’s a unique installation as the slat facade and the lighting had to be integrated where there was very limited space,” he stated. “The customer has been happy with the cooperation we’ve had and is very satisfied with the outcome.”