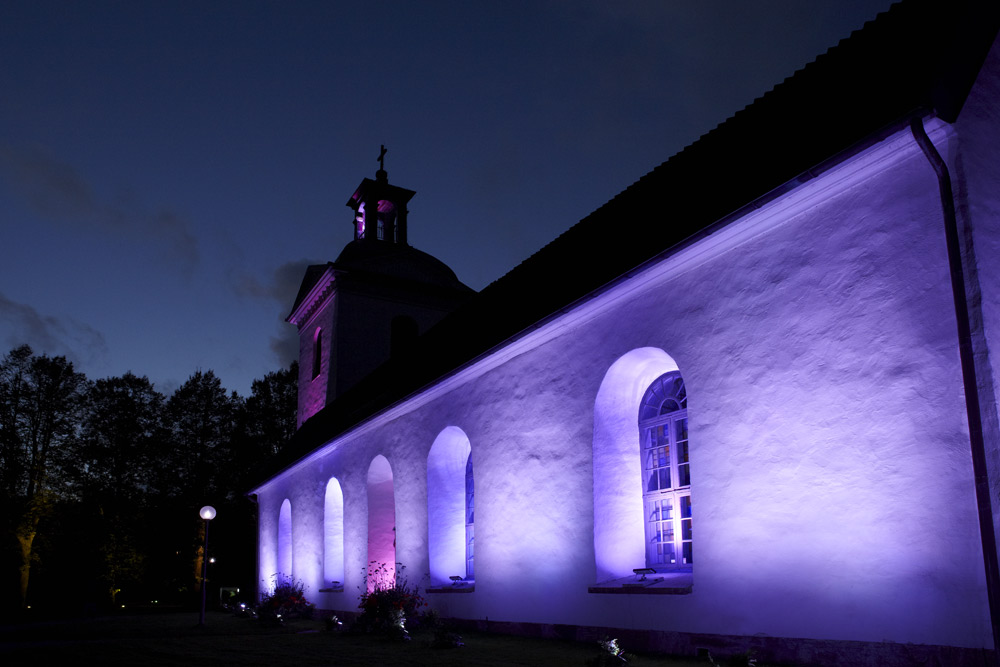 Every October since 2000, leading lighting designers have been invited to Alingsås, Sweden, to work with international students of lighting design and architecture in order to illuminate public areas of the city. Martin Professional has been an active participant and equipment sponsor of Lights in Alingsås for several years now (also with an onsite technician) and took part in the associated lighting conference as well.

The urban lighting exhibition has grown to become the largest lighting event in public spaces in Northern Europe. Following a route through the town, visitors get the opportunity to experience top quality architectural lighting as dark areas of the city are transformed into visually interesting lighting installations.

The Lights in Alingsås project is primarily a collaboration between the municipality of Alingsås and PLDA, the Professional Lighting Designers’ Association. Martin Professional was proud to have worked with designers Rafael Gallego of design studio Áureolighting, Stefan Graf, design director at Illuminart, and Jari Vuorinen on three of this year’s workshop installations.

The parish hall
In the heart of Alingsås lies a characteristic Northern European church with a not so characteristic, modern parish hall attachment that struggles for recognition after sundown. Designed by one of Sweden’s most famous architects, Carl Nyrén, spill light from nearby street poles is the only light on its classic white facade.

Taking into consideration the community building and the surrounding area, Spanish lighting designer Rafael Gallego focused on the contrast between the older church and the newer architecture of the parish hall. Using dynamic light to highlight this contrast, Gallego illuminated the church tower in a quiet, calming wash of blue from Martin Exterior 400™ luminaires, powerful yet efficient LED light fixtures, some projecting across 40 meters, while additional Exterior 400s painted the intriguing architecture of the parish hall in dynamic shades of red.

The goal was to enunciate the duality of the architecture to surprise visitors by doing something unexpected with light, says Gallego. Although he sought to produce an interesting lighting design, and succeeded, it was also important for Gallego to maintain design congruency, to show respect for the church and satisfy the client’s needs.

The church
Standing proud and elegant, and a short walk from the parish hall, is the town’s landmark church with nave and spire that can be seen from across Alingsås – at least during the day. The lighting team, headed by American lighting designer Stefan Graf, developed a lighting design based on six feelings they felt best describe the church: peaceful, welcoming, embracing, magical, mystical, and monumental. They also defined qualities of light that they wanted to include in their design, namely movement, color, contrast, brightness, and sparkle.

Graf turned to Martin Professional Exterior 1200 Image Projectors™ to fulfill many of those qualities, especially, he says, movement, by projecting slowly moving pattern onto the façade of the church to give it texture, mimicking the movement found in nature. Real-life leaf projection from a swaying tree above the entrance of the church complemented Graf’s diffused, subtle pattern and movement from the Exterior 1200s perfectly, a ‘happy accident’ as he admitted. Working alongside the Exterior 1200s, illuminating the roof and bell tower of the church, were Martin Exterior 600™ luminaires. With a background sound track helping to create an all-encompassing atmosphere, the installation was complete.

A third area, The Avenue, also incorporated projection from Exterior 1200 Image Projectors with Finnish lighting designer Jari Vuorinen using the 1200 watt projectors to light trees in a play of shadow and light while creating a safer environment for pedestrians and cyclists at night.