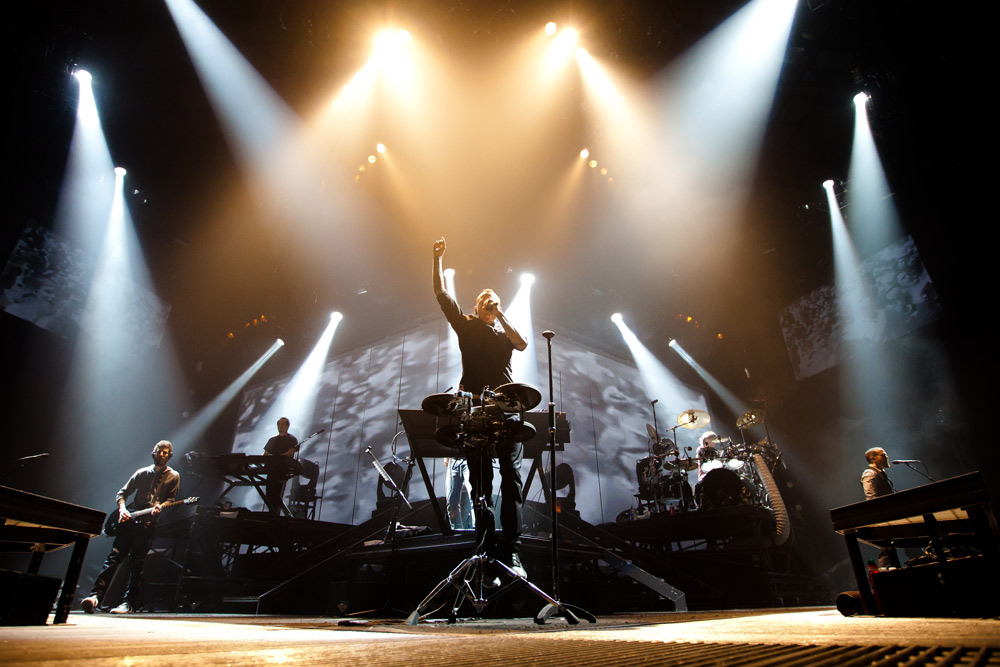 Martin M1™ at the Helm with Linkin Park

A J Pen, lighting designer for Linkin Park, was recently introduced to the Martin M1 lighting controller by his programmer for the current tour Seth Robinson.

A J was impressed by the console and describes it as well laid out so he specified one for the tour.

“I found myself to be comfortable behind the M1 after only an hour or two,” he said. “Although Seth did the programming, the band inevitably throw in another song on tour but that’s no problem as it is an easy console to navigate.”

However, apart from the odd bit of new programming A J never actually touches his console during the entire performance! How does he do that?

“What I really like about the Martin M1 console is its handling of MIDI because with a Linkin Park show I actually don’t touch the console at all!” explained A J. “100% of the lighting events that you see on the stage are triggered by MIDI show control.”

A J has an interesting and novel system where he has strung together a bunch of things in what seems at first to be a complicated way to achieve a simple result.

“I decided I wanted to time code the entire Linkin Park show,” he continued. “They have Pro Tools digital audio workstation platforms running behind them for almost every song which is not to say anyone is faking anything, it’s just another instrument in the band. Sometimes it’s very lush with lots of loops going on and sometimes it’s very sparse. I wanted to see how much more cueing I could do when I didn’t have to play it back each night thus we figured out how to get an Ableton Live session to chase Pro Tools which is just sending a SMPTE time code. We take that in and I record all of my lighting events for different racks on Ableton just as you would an instrument. Each note number gets mapped to a cue list on the M1 console.”

A J has live input via a keyboard controller, a Behringer BCF fader board and an Ovation launch pad.

”Every Linkin Park song has a chunk of time-code that is its own and we work that out with Dylan, our Pro Tools guy, so if I get a certain frame number I know what song it is,” added A J. “That in turn fires the macro on the M1 console to set up that song. It also tells it that a certain range of cue lists is what will be mapped for that song. So we are taking note number information and control change information, which is provided by either live input from the control surfaces or from the Ableton time line.

“For example, instead of writing a chase where each step is a different group of lights I take four or five MIDI note number, I play the chase into the Ableton time line and that translates it into MIDI show control.

“I find that separating the task of cueing from the task of describing what the lights are going to do stops you from getting bogged down. If you have a clear vision of how you want a song to look like first and program that information into the timeline, then do the lighting looks means you accomplish a lot more in less time and it looked and felt more musical. Whether your band is using timecode or not you can use control surfaces that have been designed for musical playback.”

“The optics are just incredible from a really narrow beam to a wide zoom and it edges out the Vari*Lite because of its’ aperture with its larger source – the beam starts out from the fixture a little bit bigger,” he commented. “I love the animation wheel. Between that and the rotating gobo I don’t need to use a lot of different gobos as those two effects are enough to carry the show. The animation wheel gives a continuous upwards or sideways movement and is more interesting to look at than just a rotating gobo.”