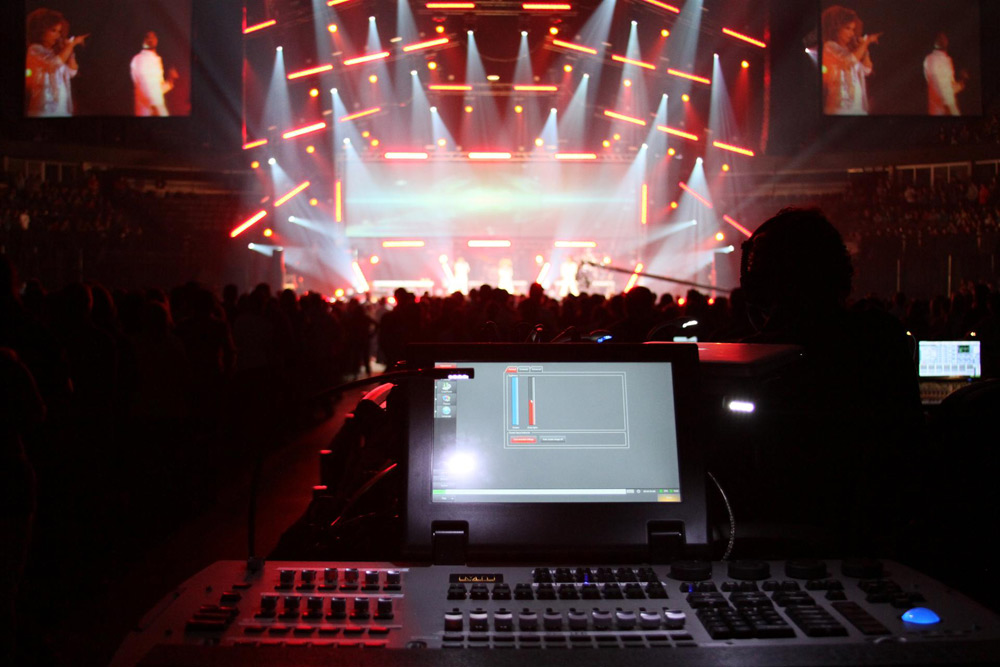 Having just finished a three-week tour in May, Starfield was booked to play a set on the main stage at this year’s YC, but Brad was unclear whether he was going to be allowed to patch in the M1 to operate the rig.

With less than a week until the event, he was cleared to patch into the rig and received the plot and patch from the design firm. He then went to work drawing the rig in Martin’s lighting and set design software, Martin ShowDesigner™ (MSD), which allowed him to visualize the programming before the event.

“Since we had just come off the tour run, the band wanted their main stage set at YC to look similar to the tour shows,” Brad explains. “I already had all the cuelists with the correct time code events, but it was just a matter of programming the songs with the new rig into those pre-existing cues. Using the M1 with MSD, I was able to rough in the programming in a few short days.”

M1 ease
Since the event was festival style, Brad didn’t have a lot of time with the rig before the set to dial everything in, “but it was great having the peace of mind that the updating of the presets would be quick using the M1,” he says. “There was even a song sprung on me last minute before the set that I was able to program and throw together quickly because of ease of use.”

Brad ran the show on the M1 with a MIDI module and used MIDI time code to trigger the lights in a cuelist-per-song format using Qlab software to play audio, video, cue, and MTC.

Brad continues, “From patching to show execution the workflow makes a lot of sense with the M1 and is quick allowing me to plug into various lighting rigs and program a show when time is short. It’s also great having a console that can do pre-visualization when there is more time to spare, all with an affordable software license.

“One of the other things I love about this console is the size and weight of it. I’m able to fly with it anywhere easily as checked baggage without hassle.”

Powerful yet portable
The M1 is a full feature lighting desk yet with the agility of a smaller one, all in an ergonomic, low profile design that is simple to overview. The M1’s surface is clean and easy to navigate with fewer buttons and options to overwhelm the user, an ease-of-use concept that has struck a chord with lighting programmers and designers across the globe.

“Everyone who sees the console is impressed by the control power of the M1 in a package that’s very portable,” Brad concludes. “This event proves to me that the M1 can compete with other similar format consoles on a big lighting rig such as this. As the M1 grows in popularity, it will continue to impress experienced and new operators.”