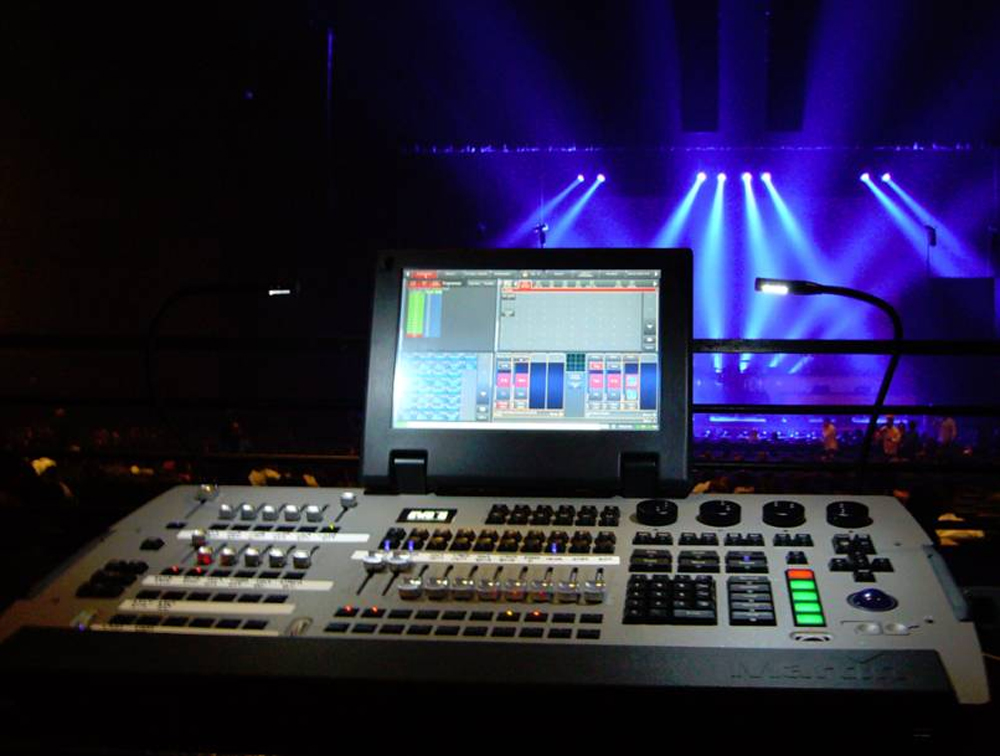 Martin Professional’s new M1™ lighting console made its US debut in mid-May at the Nokia Theatre in Los Angeles at a concert event by Larry Hernandez and Roberto Tapia.

Sponsored by Spanish language radio station La Rockola 96.7 FM, the show was programmed on the Martin M1 in a matter of only three hours by lighting director and programmer Ed Motts, a 14-year industry veteran and one of the earliest users of Martin’s Maxxyz™ series of consoles.

“The Maxxyz has always been good to me and the support has always been great,” Motts commented. “I saw the M1 console early on and was initially interested because of the weight and the size, but it also has the same functionality as a big Maxxyz with a price point that is very appealing.”

Motts used 8 Universes across a house rig of about 70 moving lights, dimmers and LEDs, and the event came off without a hitch or hiccup. He was impressed with the speed of the console, the layout of the surface and the number of playbacks at his fingertips. Live modifications and changes in the fully improvised show were handled without delay.

“As it runs the same operating system and software as the Maxxyz, the move from Maxxyz to M1 was pretty seamless. It’s new technology yet very stable and the speed is amazing. It patches fixtures very fast, and I was using a beta model! The production model is even faster.”

Plane simple
Motts, who often does one-offs with Jennifer Lopez around the world using locally supplied consoles that are sometimes not up to snuff, commends the portability of the M1, which can easily be moved by a single person and is light enough to be checked in as luggage at the airport.

“To be able to have a console like the M1 that I can take on a plane with me is very appealing,” he says. “With the Martin family of control products I have no second thoughts at all in putting it on any of my shows. I can program on a large Maxxyz, take it out on the road on the M1, and do updates via Maxxyz PC. I have a Maxxyz Wing as well so if I want motorized faders I have that at my discretion. It’s the full range.”

All DMX on the show was generated by Martin’s Ether2DMX8™ router without problems or delays. The Ethernet box was also used to save backup cues but was not needed.

Just as he was with the Maxxyz controller, Motts has quickly become an early adopter of the M1 and consequently is one of the industry’s most experienced users of the new generation controller. He has already used it on a number of corporate shows and other events including performances by singer/songwriter Ke$ha.

“When people ask me why I go with Martin controllers, at the end of the day it’s the support,” Motts says. “When I can call someone at Martin and get an answer quickly, or if they don’t know the answer they can get it in a timely manner, that’s invaluable.”