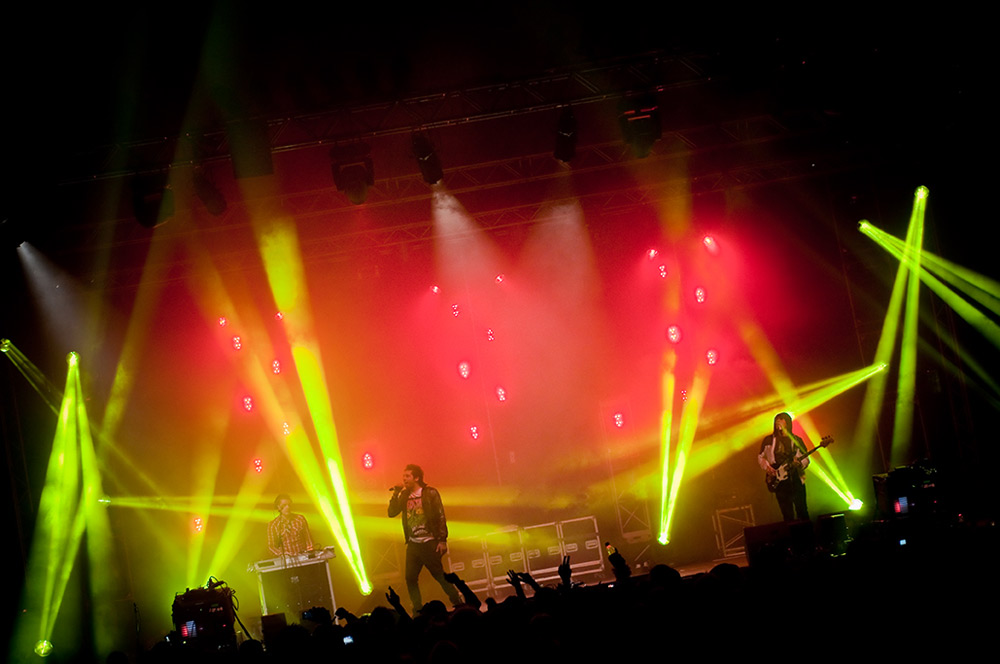 Gaskell was happy to get his hands on 12 Martin MAC 250 Beams for Orbital’s set at London Freeze 2009, a snow sport and music event held at Battersea Power Station in London from October 30 to November 1.

“It has an excellent fat beam, usable gobos, and lovely color mixing,” he says. “They gave the rig a serious level of punch and stood out over the rest of the rig, giving stadium style fat searchlight beams.”

MAC 250 Beams and more
The festival played host to live music acts on two stages with Orbital as headliners. Gaskell had six MAC 250 Beams sub hung on drop bars across the back of the stage with an additional six on the floor. Also in the rig were 12 Martin MAC 700 Profiles™, 10 MAC 700 Washes™, 10 Atomic 3000™ strobes with Atomic Colors™ scrollers, 8 MAC 250 Entours™ and 2 Magnum Pro 2000™ smoke machines.

“David Stewart at Martin UK was great as usual and looked after me, and a very good house crew worked hard to produce a great show,” Gaskell says.

VME supplied
VME of Knutsford, Cheshire (UK) supplied lighting and sound for the main stage and sound for the snowboarding competition. This is the second year VME has been involved in London Freeze with this year’s rig designed by VME’s Steve Ness. Lighting programming and operation was by Jamie Campbell.

Dion Davie, Managing Director at VME stated, “We chose to stock the MAC 250 Beam fixture as it is a good addition to the Martin range. We were looking to replace our old MAC 300 units and have always been happy with quality of product and support we get from Martin. This coupled with a deal on purchasing 250 Washes with Beam upgrade kits seemed to make sense. We got a very versatile unit at a good price.”

“The Beam fixtures have an incredible light output and are not lost when using them alongside more powerful fixtures such as the MAC 700 Profiles and Washes,” Davie comments. “The Beam shapers in the color wheel are also a very nice addition and can be used to create some very nice and unusual looks. The upgrade process was very straightforward.”

The London Freeze rig was designed to work for traditional rock ‘n’ roll bands as well as dance acts and DJ performances, all of which took place throughout the weekend.

“Quite a few of the acts had LDs with them, all of whom seemed very impressed with the 250 Beams as a fixture,” Davie continues. “Thanks to David Stewart from Martin UK who was always more than willing to offer help and support with organizing new products so we can stay up to date.”