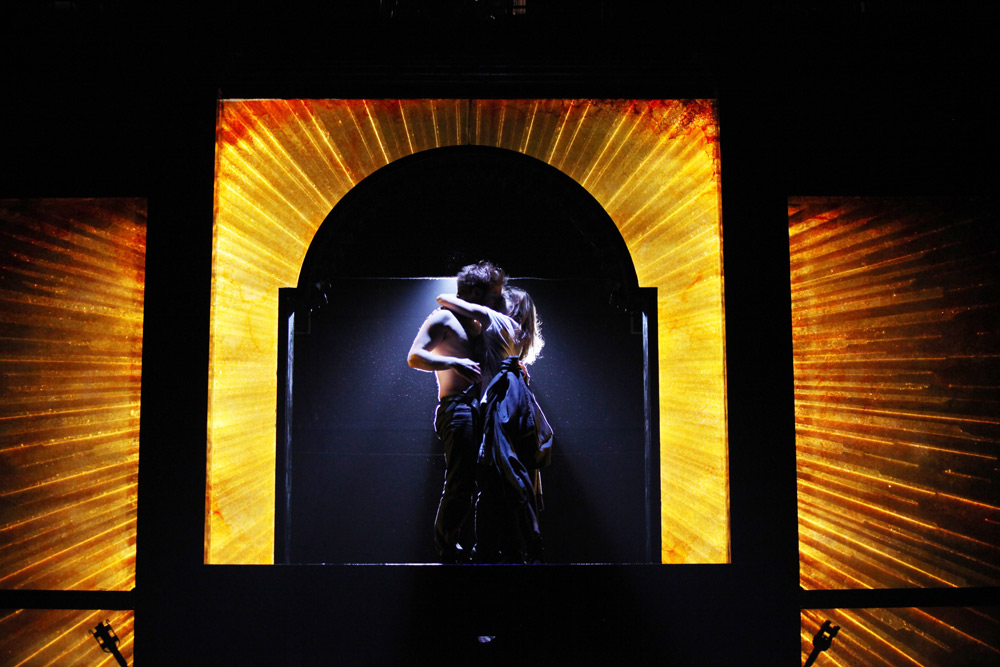 The Royal Shakespeare Company (RSC) in Stratford-upon-Avon is one of the world's premiere classical theatre ensembles. Its location in the hometown of the Bard himself makes productions even more memorable for theatregoers.

A recent purchase of Martin MAC III Profile™ moving head luminaires by the RSC has further highlighted the company’s leading reputation. A senior member of RSC Lighting describes the process that led to their acquisition.

When Artistic Director Michael Boyd invited Wolfgang Göbbel to light his 2009 production of As You Like It at the Royal Shakespeare Company’s Courtyard Theatre, previous experience suggested that the lighting would be anything but conventional. In particular, Wolfgang expressed an interest in using very bright sources with flexible positioning and beam-shaping to work the diagonal axes of the Courtyard’s thrust stage. For Production Electrician Simon Spencer and his team, the search was on for a suitable fixture that would meet not only Wolfgang’s needs, but also satisfy Michael’s stringent requirement for exceptionally quiet equipment.

RSC Lighting had given significant input to an earlier Martin project, developing an intelligent profile for the theatre market. Although that project had yet to come to fruition, they liked what they saw in development in Denmark, so it seemed obvious to look to the Martin range for inspiration. Some helpful conversations with Jessica Allan and Matt Pitman at Martin Professional indicated that the MAC III Profile already had most of the essential attributes and, crucially, that a performance module, incorporating shutters and indexing was at a late stage of development and almost ready for launch. This was clearly a fixture with enormous potential, however, a few substantial hurdles remained: the cost was considerably in excess of what RSC is able to afford on a production budget; the noise factor had yet to be tested; no convenient rigging position existed in Wolfgang’s required location; finally and critically, the performance module was unlikely to be ready for field testing at the time of the tech!

As is frequently the case, it was Dave Isherwood at White Light who delivered the game-breaking moment: in concert with Wyatt Enever at Goboland, Dave came up with a range of bespoke patterns for the second gobo bulkhead (which the performance module replaces) simulating specific shutter cuts to suit Wolfgang’s design and fully indexed to accommodate the movement of the fixture. In addition, Roger Hennigan at White Light produced a pricing structure to allow for retro-fitting performance modules when available and enable RSC Lighting to contribute valuable on-site feedback about the early versions; as Dave had just invested heavily in the product for White Light’s hire stock, he was happy to supply a demo unit along with some possible competitors to be auditioned by Michael Boyd.

The MAC III Profile beat all comers in the (lack of) noise test and was also noticeably the brightest of the assembled fixtures. So far so good, now for the money…it was time for Geoff Locker (Technical Director) and Vince Herbert (Head of RSC Lighting) to take up the cudgels and make the tricky case for spending a substantial sum from the equipment budget of the RSC Redevelopment more than eighteen months before the projected move back into the new building. Eventually, the team’s belief that the MAC III is the right product for the future prevailed over all detractors; funds were released and White Light delivered three fixtures in good time for the As You Like It fit-up.

For the proud owners of the new units, the final hurdle was to rig them in the desired location, where no rigging position existed. In conjunction with RSC Automation, Simon and his team constructed and installed 900mm x 500mm rigging frames, flown from Stage Technologies BT200 winches via a network of divert pulleys on the roof girders (affectionately known as clusters), allowing proportional control of the height of the fixtures in addition to the regulation attributes. It only remained to find a way to correct unwanted motion introduced by pan and tilt of the fixture. Fortunately, following the successful launch of RSC Lightlock© at PLASA the previous autumn, the ideal solution was at hand and Lightlock had its first show deployment anywhere in the world, rather appropriately, at the RSC in Stratford (RSC Lightlock is now available globally under licence from Total Solutions Group plc.).

As well as being an adaptable and very bright source, LDs have valued the contribution these versatile units have made to creating storms, waves, ripples, a “magic” crystal ball, mystic sorcery, transformation and illusion. Wolfgang Göbbel, the initiator of the entire process, specified the MAC III again when he returned to the Courtyard to light Antony and Cleopatra, this time choosing to explore the space from the opposite angle with high-level three-quarter back light positions.