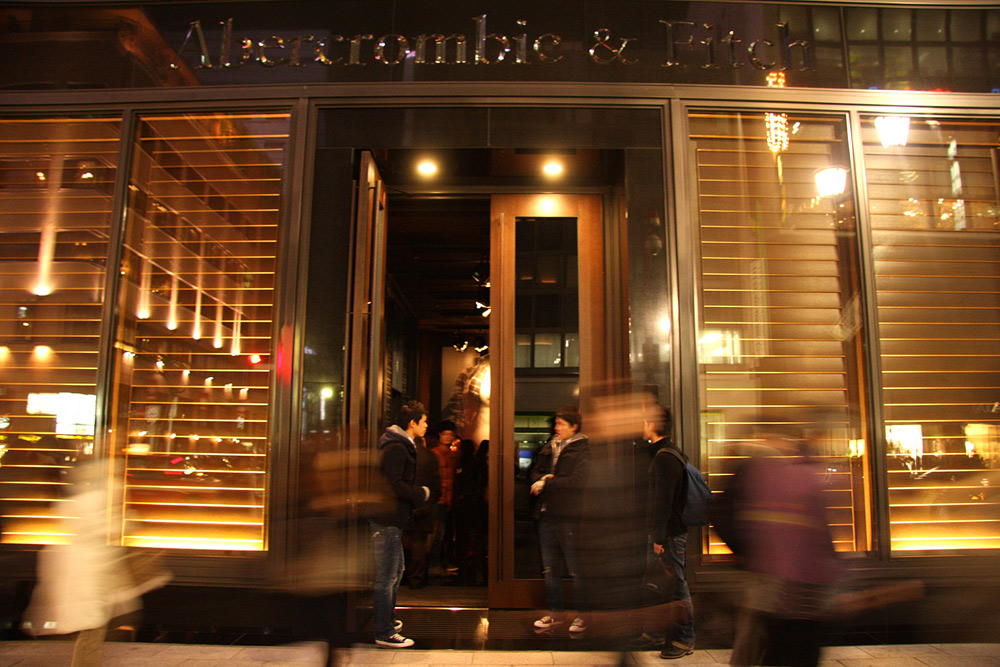 Abercrombie & Fitch, the successful American fashion retailer, opened its doors in Tokyo on December 15, 2009 in the prestigious Ginza shopping district. It is the brand’s first flagship store in Asia. Similar in design to its New York flagship store, the Ginza flagship is 820 square meters and has the largest hand painted mural in the world.

The Ginza Abercrombie & Fitch is colossal at 56 meters and is the tallest structure in the entire Ginza shopping district. The 11-story building is packed with the hottest store models in the world. The atmosphere is unlike any other, immersed with vibrant youth, an elite All-American lifestyle, and unmatched beauty inspired by the natural terrain of the Adirondack Mountains of New York State. Add to the mix heart pumping music playing through 114 speakers and 83 subwoofers for a store experience unlike anything else in the world.
Abercrombie & Fitch is thrilled to have opened their first flagship store in Ginza, where their Japanese fans can experience the brand firsthand. The brand’s reception was overwhelmingly positive. Long lines of A&F fans wrapped around the block, waiting to meet the models and check out the store.

Façade lighting
The store’s unique façade design, featuring louver frames filling both sides of the building and leaving no space for windows, raised the need for not only a remote control system but a system monitoring solution. Reliable Martin Cyclo 02 color temperature changers equipped with dual control ballasts and two T5 28W 2700K fluorescent tubes were chosen to illuminate the louvers.

Custom control
A custom made touch screen based control and monitoring system was developed. From the touch screen system it is possible to execute regular lighting scenes, run maintenance orientated programs, and visualize alerts on possible lamp or ballast failures. This way, once an error is spotted, service staff can go directly to the fixture in question and proceed with the necessary replacement, after accessing a cleverly designed louver pull-out mechanism.

In total, 130 indoor Cyclo 02 and 44 outdoor Cyclo 02 IP65 luminaries are mounted at the bottom of each louver on the building’s façade, as well as another 8 Cyclo 02s placed at the 1st floor shop window area. The whole package was provided by Martin Professional Japan Ltd.

A&F continues to expand
Following Tokyo, Abercrombie & Fitch is scheduled to open a second store in Fukuoka, in southern Japan in 2010. In addition to its existing New York, Ginza, Los Angeles, London and Milan locations, a flagship store in Copenhagen is also being projected in order to strengthen the brand’s European presence.