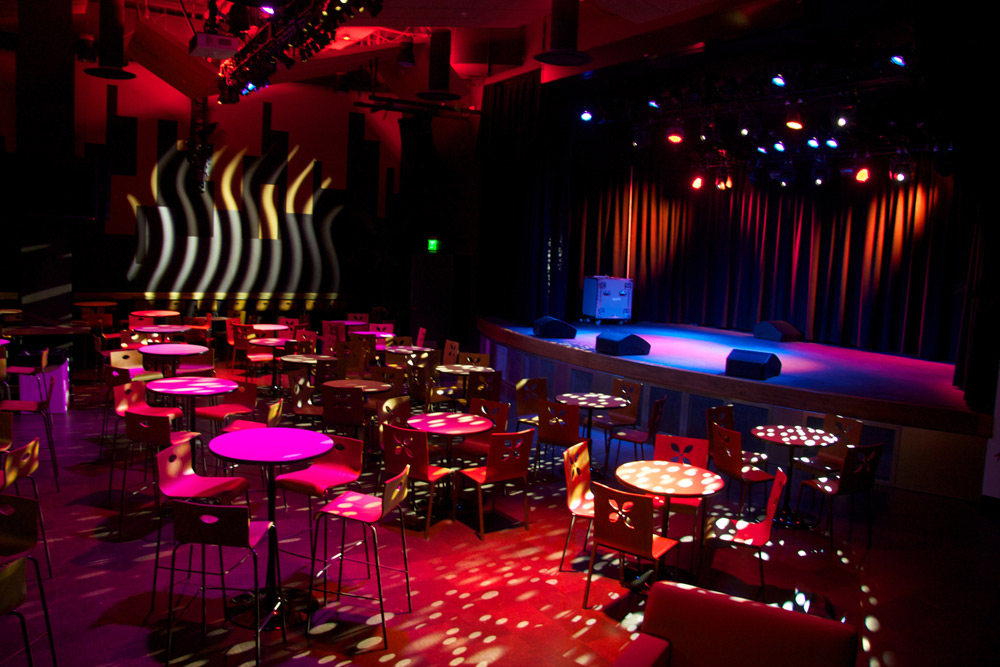 The Trojan Grand Ballroom is a classic 1000-capacity multi-purpose venue with a proscenium stage used for a variety of events like formal dinners and receptions, student group performances, and guest musicians. Tommy’s Place, connected with the on-campus bar, is a 400-capacity entertainment venue with stage for live performances. Both venues feature conventional and moving lights hung on straight truss over the stage and house with power and rigging designed as flexible as possible for future additions or changes.

MAC 350 Entour
“We researched and demoed a lot of gear and the MAC 350 Entour was a pretty clear choice,” Brandon commented, adding that the fixture is the perfect size with the right feature set and price range for the two venues. “Plus, since its functionality was as good as lamp discharge fixtures, the LED source was the kicker. We have been unbelievably impressed with it. It performs great - optically, mechanically - next to other discharge fixtures two or three times the price. It has a great beam and output, perfect dimming, and good movement. And it takes so little power!”

MAC 301 Wash
Brandon says that once they decided to go with the MAC 350 Entour, the MAC 301 followed. “Compared with similar LED wash fixtures, the MAC 301 is a leader and there isn’t much competition at that size,” he states. “It’s a great rock and roll light. It has great primary colors, strong output, a nice beam, quick movement, and the zoom is nice to have.”

The switch to LED fixtures has given the Department of Performance Venues, and the University, several advantages. Less heat created means there are fewer issues, and in heavy-use environments like the Ballroom and Tommy’s Place there are fewer lamps to monitor and replace. “The low power consumption is green but practically allows us to run our entire mover rig on only a handful of 120V 20A circuits,” Brandon states.

Lighting control
The choice of lighting consoles came down to features vs price with many of the competitor consoles in the Martin price range lacking in terms of software features, an intuitive interface, and playback functionality. Brandon comments, “Frankly, for most of our uses, the extra features of the larger consoles just didn’t justify the price difference. Overall, the Martin consoles offer top-notch features at a lower price plus the promise of continued development - we like the trajectory of the consoles - was encouraging. Lastly, because we were looking for two different size consoles to be used by the same users, it was tempting to have the exact same software running on both; with other companies there were usually (at least) small differences.”

Martin M1
Brandon chose the new M1 lighting console, Martin's new ergonomic desk that provides fast and intuitive operation in a portable and affordable package, for the Trojan Grand Ballroom. “The M1 has amazing utility in a small package and considering the price, it’s unmatched,” he states. “The software is just as powerful as the Maxxyz Compact and it’s nice that it’s identical, which makes it easy to transition users as well as show data. It is an all-in-one package that we can take anywhere and have the power of a full lighting console.

“The layout of the playbacks, and inclusion of features such as executor buttons, makes the M1 run more like a full-size console. In fact, because everything I need is in such a compact form right in front of me, it makes programming very personal, and I find myself preferring the M1, even when programming on larger consoles.”

While more advanced editing features are always fairly complex, getting the Martin consoles up and running in the Trojan Grand Ballroom and Tommy’s Place was fast.

”One of our lighting techs had never touched a lighting console before this summer,” Brandon explains. “His console learning experience was completely on an M1 and within about a week he could patch a rig, program presets and playbacks, and run a rig. Other lighting techs quickly fell in love with it. The fact that the Martin consoles are more and more based around the touchscreen input makes the programming experience more intuitive.”

The lighting plot for the Ballroom is as generic and as flexible as possible, so that it can be adjusted for each show and the M1 moves accordingly. “Because it’s relatively small and portable, it lets us do this pretty easily.”

“From a hardware perspective, the Maxxyz Compact with two additional MaxModules gives an ample amount of room to put playback controls. Everything is top level or a page away at most. And if not, the motorized faders and large LCD buttons make switching contexts quick and easy. Programming is also quick with the combination of the LCD buttons and trackbelts. Overall, the Martin consoles have performed great for our live events.”

Jem K1 Hazers
The mid-air projection canopy for beam visualization is provided by the Jem K1 Hazer, a continuously operating hazer that features a long hang time for greater fluid economy and an overall power consumption half that of other hazers in its class. It also includes a patented backup system and low fluid consumption that significantly reduces service and maintenance. It uses a specially-formulated K1 Haze Fluid that leaves no residue on light fixtures.

“The K1 hazers are a great step up and have performed flawlessly,” Brandon states. “The haze hangs forever, and the consistency is perfect for good beams, much like oil-based haze with none of the oil-based consequences. The output is strong and consistent and fluid consumption is minimal with the K1 bottles lasting 2-3 times longer than our previous hazers. Although we haven’t experienced it yet, the auto shutdown will minimize clogging and servicing downtime.”

Brandon recognizes the assistance he received on the installs from other members of the department, including Steve Farquhar, as well as Rafael Garcia at ELS, the Estradas at DSJ Electric, David Tramontina at ETC, and Greg Jones and Matthias Hinrichs at Martin. He concludes, “Lastly, it’s important to note that the console support from Matthias has been unparalleled. He followed up multiple times over the phone, and stopped by the venues in person to check in on everything, as well as give us some programming tips.”

Besides the Trojan Grand Ballroom and Tommy’s Place, Martin gear can also be found at USC’s Bovard Auditorium where MAC 700 Profile™ and MAC 575 Profile™ luminaires are used for a variety of performances.