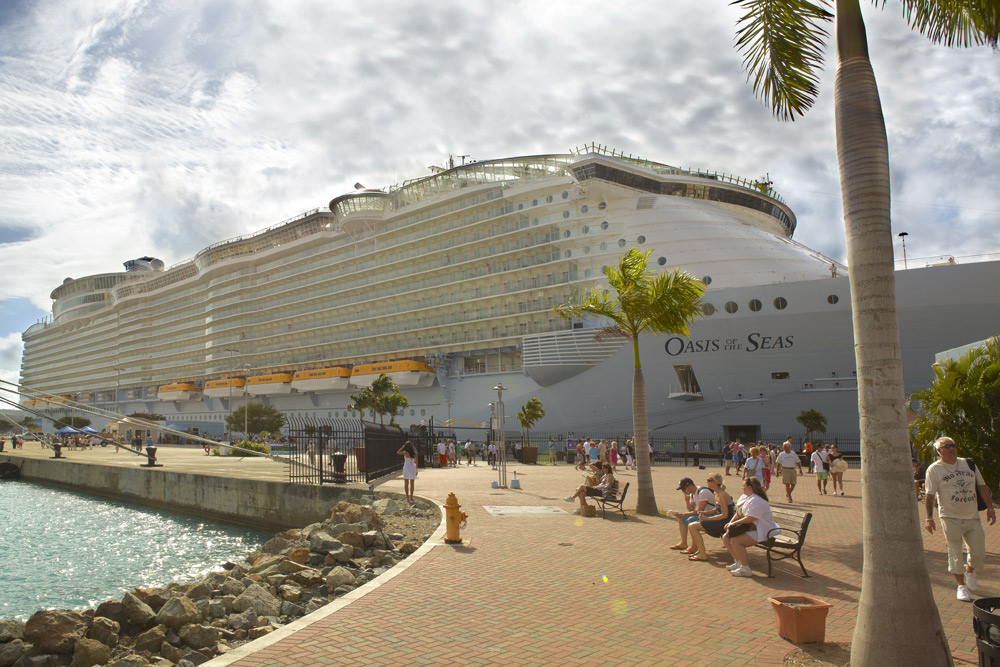 With more than 15 years of experience in partnering with the world’s largest cruise lines, Martin Professional has become the preferred visual solutions supplier to the cruise ship industry. That fact is clearly evident on the world’s largest cruise liner, Royal Caribbean’s Oasis of the Seas, which recently set sail with a multitude of Martin Professional dynamic lighting and smoke solutions.

Oasis of the Seas, built at the STX shipyard in Finland, is a world-class mixed-use entertainment cruise liner that surpasses anything that has come before it. Sailing from its homeport of Port Everglades, Florida Oasis is 360 meters long with room for 5,400 passengers and a crew of 3,000. Its final cost is put at $1.4 billion.

Because of the harsh environment and demanding constraints of the ocean environment - constant motion, exposure to salt water, humidity, high temperatures, etc. – high technology products like advanced visual systems must be extremely reliable, as well as compact and easy to service. Specification, supply and installation of the Martin systems were completed to a highly professional and technical standard by entertainment systems integration firm FUNA.
Responsible for the specification and system design of all venues and spaces carrying entertainment systems onboard Oasis is Christopher Vlassopulos, head of entertainment technology for Royal Caribbean International and Celebrity Cruises. In addition, Vlassopulos served as Technical Director for the Opal Theater’s “Hairspray” show.

Michael Riotto Design was show lighting consultant for several areas of the ship, using Martin lighting in Jazz on 4, Blaze, Boleros, Dazzle, and Viking Crown lounges. In addition, MRD was responsible for the programming of all entertainment lighting for public spaces as well as commissioning the architectural lighting and dimming systems throughout the ship.

Principal Michael Riotto comments, “We use lighting to support the environments of which we collaboratively create with the architects and the Royal Caribbean entertainment team. We aim to offer solutions which are unique, clever, and creative given the parameters and challenges that we consistently face. With Oasis, we were tasked at creating simple yet effective spaces with maximum bang for the buck while being reasonable and maintenance-conscious.”

Addressing important criteria to consider with regard to lighting gear on a ship, Riotto states, “It is imperative to specify equipment which can withstand the harsh electrical environments found onboard marine vessels. Equipment must be simple to operate and maintain while not compromising the quality or ambiance of a space. We have specified Martin equipment on several marine projects and we find the equipment to hold up well while being an affordable solution for the client. In addition, our client, Christopher Vlassopulos of Royal Caribbean, has always had a great relationship with Martin and choosing Martin was a collective win-win for everyone involved.”

Royal Promenade: Twice as wide as the promenades on its other ships, Oasis' Royal Promenade is the ship’s central meeting place where shopping and eating combine with entertainment and fun. Along the football pitch length of the Promenade, Martin visuals blend atmospheric and show lighting throughout the day and night.

Opal Theater: One of the ship’s many diverse entertainment offerings is the Tony award-winning Broadway musical “Hairspray,” one of two productions that take place in the ship's grand Opal Theater beneath a large rig of Martin gear.

AquaTheater: A truly one-of-a-kind venue is the outdoor 700-seat AquaTheater with large pool that stretches across the stern of the ship. It features several shows that include divers, swimmers and acrobats performing to a spectacle of music and Martin lights, as well as choreographed fountain shows programmed to music and lighting effects.

Studio B: The multi-configurable Studio B and ice rink, which can be transformed into a television studio or used for exhibits, fashion shows and concerts, features a professional ice show 'Frozen in Time,' featuring the writings of Hans Christian Andersen. The Studio B rig consists of Martin MAC moving heads, LED battens and Jem smoke effects.

A host of additional clubs, lounges and bars for adults including Blaze nightclub, the Latin-themed Boleros nightclub, the On-Air Karaoke Bar, and the adults-only Solarium, feature Martin visual solutions, as do social spots for teens and kids.

Martin is also supplying an identical equipment package to the Oasis’ upcoming sister ship, Allure of the Seas, deploying from the STX shipyard in November 2010. Martin has supplied all Royal Caribbean ships fleet-wide including Freedom of the Seas and Independence of the Seas.