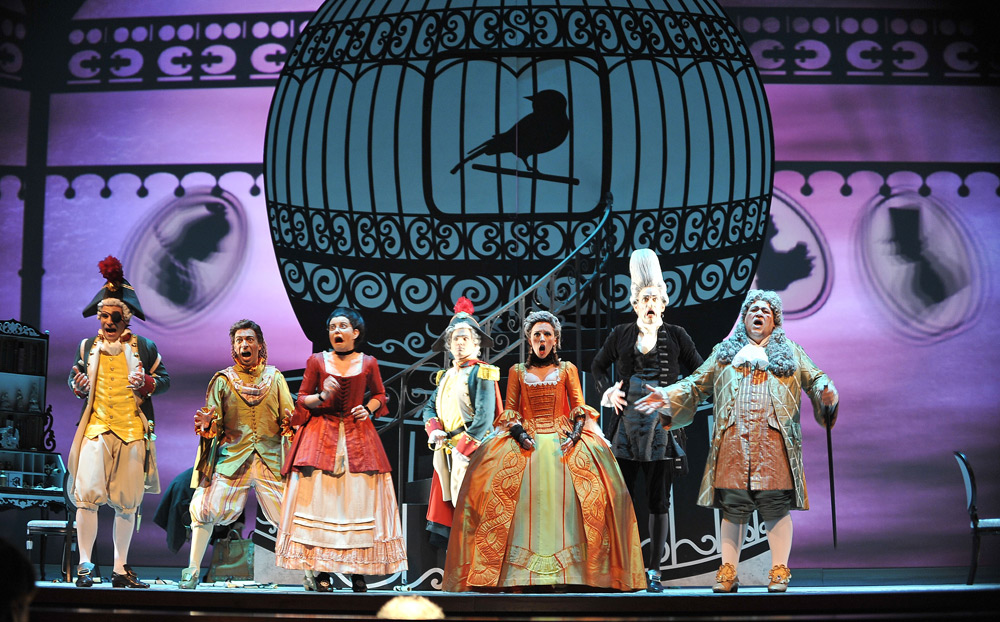 Maxedia™ Magic for Florida Grand Opera´s ”The Barber of Seville”

Opera companies typically build grandiose sets befitting the stature of the pieces they produce. But for Florida Grand Opera’s recent production of “The Barber of Seville,” the creative team did something different by using a huge rear projection screen with 20k projector fed by a Martin Maxedia Broadcast™ media server with fantastic results!

The backdrop graphics provided subtle enhancements to the production, a series of silhouettes and computer-generated animations that were stylish without distracting from the drama of this early 19th-century work.

“The graphics were beautiful and amazing,” stated media server programmer Martin Potoczny of Visivo Visual Design who has worked with the Maxedia system for years. Maxedia is a user-friendly tool for media composing and playback in all types of applications with Maxedia Broadcast optimized for high definition playback.

“We used all custom created content by Lava Studio of Miami who provided a hard drive with all the content segments,” Potoczny comments. “I then put the show together with timing and cueing using the Maxedia server and a controller. The Maxedia provided a solid playback system for our custom Full HD content. Being able to lay the show out with the touchscreen interface then program with CuebyCue mode and A/B mode was a great benefit.”

Throughout the opera, the projected content portrayed a variety of dynamic set elements including artistic street scenes, different rooms, etc. For example, when a singer hit a certain spot on stage portraits on the wall would sneer, or when a singer planted a seed in the ground a tree would grow.

“The Barber of Seville” ran in late February at the Sanford and Dolores Ziff Ballet Opera House at the Adrienne Arsht Center in Miami, and at the Au-Rene Theater at the Broward Center for the Performing Arts in Ft. Lauderdale in early March.