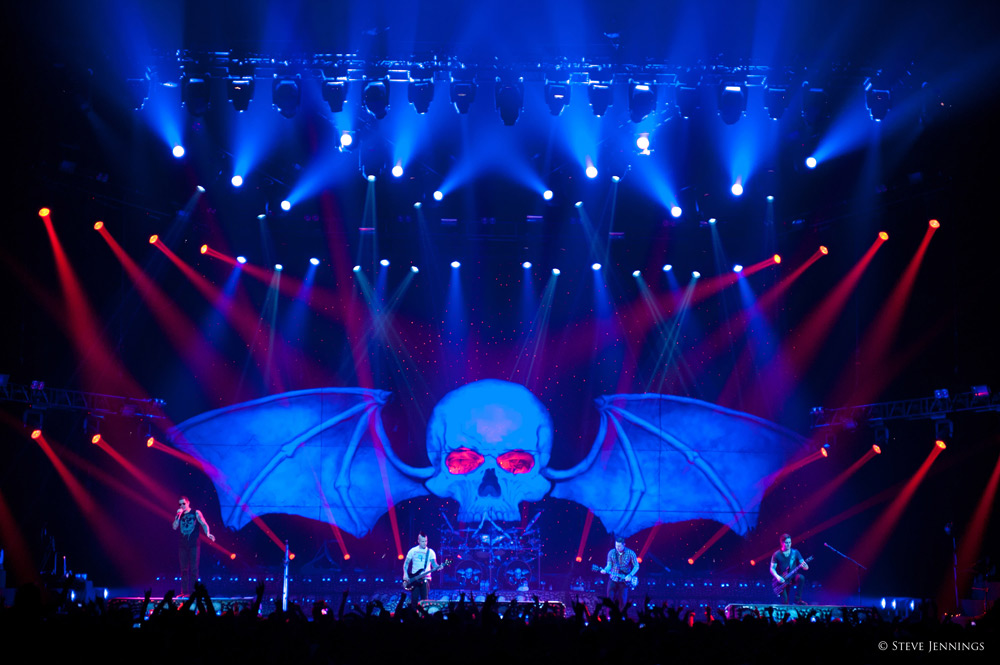 In August, Ahlstrand created a new design for the American band’s latest outing, a tour that saw them hit many of the same cities as the previous tour. “That’s why we needed to change the design,” Ahlstrand explains, who first started working with the band in late 2008. “We wanted to keep the look fresh so we incorporated some new looks using some new gear like the MAC III Performance.”

Central to set designer Jordan Coopersmith’s setup is a larger-than-life set piece of the band’s logo, a 56’ wide x 18’ tall Death Bat. “There is a lot of pyro throughout the show and the Death Bat also catches fire in every way you could possibly imagine,” Ahlstrand says, “but it needed more texture for the times that the flames were not present, so we used the MAC III Performance on it. It gave me the option to bring it to life with the animation wheel and deep saturation.”

The lighting looks are characteristically dark and moody with rich saturated shades used throughout. “I love the colors that the Performance provides. I use a lot of blue and lavender to tone the bat with dark red and green looks. I even use quite a bit of heavy magenta throughout the show,” Ahlstrand says, adding, “The band doesn’t really like heavy front light in their face and don’t want to stand out with white light so I use very saturated color from the front and a lot of side light and shin light.“

In a nod to their fans, Avenged Sevenfold let them vote on what 20 songs would make the tour play list from which the band picked 11 to play each show (Avenged Sevenfold songs are long). Ahlstrand programmed the show on Martin’s user-friendly lighting and set design software, the Martin ShowDesigner™. Andre Petrus directed the lighting out on tour.