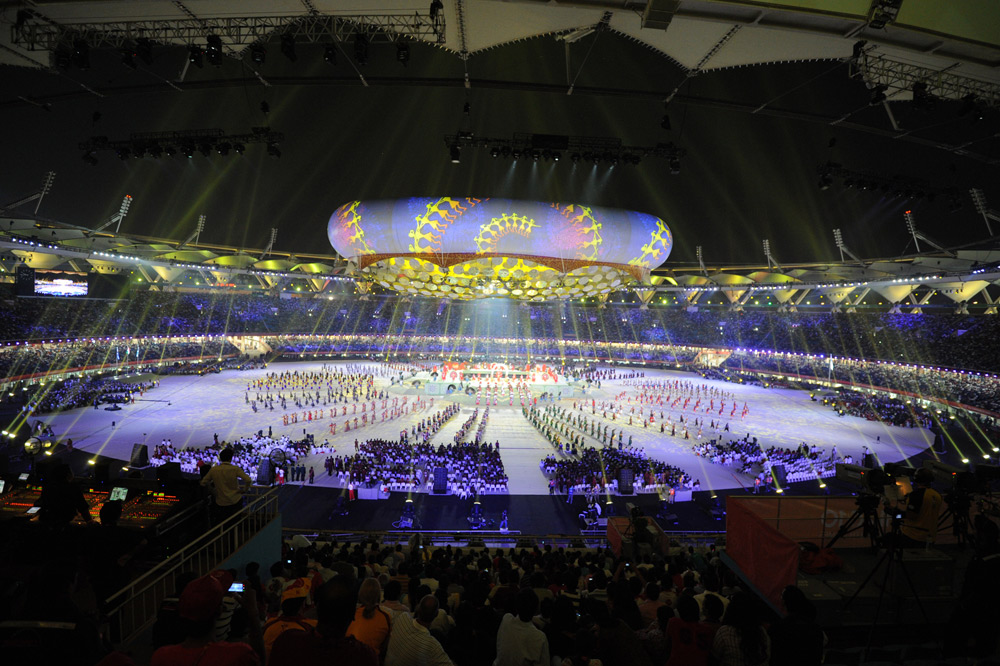 Held at Jawaharlal Nehru Stadium in Delhi, India from 3 to 14 October, the first time the Commonwealth Games have been held in India, the Games were viewed as a source of pride and the ceremonies widely praised as a resounding success.

With 45 meter trim heights and up to 90 meter throws, Appelt needed ample power to light the large field and stage. He commented, “It’s quite a big stadium so it was necessary to fill it up, which the MAC 2000s did effectively. There were weight limits for the roof as well so I had to choose powerful workhorses. The 2000 XBs worked quite well. “

The MAC 2000 Wash XB is Martin’s extra bright 1500 W wash light with an extremely bright output of over 60,000 lumens and four lens options.
“They are really powerful, they have a really punchy beam and when you flood them they are still powerful enough to give a proper color wash on the field of play,” Appelt stated. “We used groups of fixtures to target one part of the stage and it gave a good impact.”

Appelt, who is already in design mode for next year’s Eurovision Song Contest, used the MAC 2000 Wash XBs on this year’s International Indian Film Academy (IIFA) Awards in Sri Lanka. “I’ve used the XBs before but never in this quantity. It was great to see that they did just what we wanted them to do and I must say that they have become one of my favorite workhorse lights, especially with the micro-Fresnel lens,” he stated. “It’s great to have the narrow or wide options.”

The Commonwealth Games’ lighting system consisted of two truss rings, one inner truss with color washes to flood the field of play, which included the MAC 2000 Wash XBs, and one outer truss with standard washes, including the MAC 2000 Wash fixtures. A balcony rail ring with approximately 300 wash fixtures was used for low side lighting and back lighting effects for center stage applications. The lighting system included a total of 1300 moving heads with lighting supply and rigging by PRG.

A Martin Maxxyz Compact lighting controller running 16 DMX universes was used to control over 400 LED and automated lighting fixtures that washed color across the roof and X-structure of the Jawaharlal Nehru Stadium façade. The fixtures ran daily throughout the Games except for the Opening and Closing ceremonies. Lighting programming was by Martin Professional’s Jeffrey Ong.

Also, 32 Martin Exterior 600 color changers were used to light the facade of Dr. S. P. Mukherjee Swimming Stadium, host to swimming and diving competitions, with control from a Maxxyz Compact. Programming was again by Jeffrey Ong.

Despite persistent monsoon moisture before the opening ceremony (it was reportedly one of the wettest monsoons in years), and no power at the stadium during set up, which made for somewhat humid fixtures and limited rehearsal time, the show came off without a hitch and feedback was universally positive.