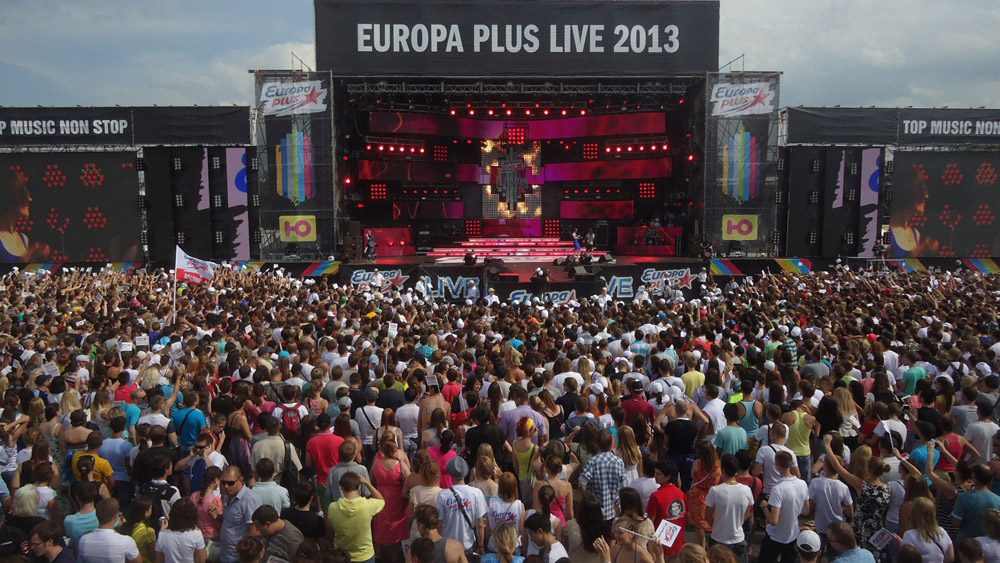 Europa Plus Live, a large music festival held at Moscow’s Luzhniki Stadium in July, marked the Russian debut of HARMAN Martin’s new M6 lighting console. One of the most important music events of the Russian summer, Europa Plus Live featured performances by popular foreign and Russian artists and attracted over a hundred thousand people.

A day after arriving at Martin’s Representative Office in Russia, the M6 was sent to Luzhniki Stadium as the main lighting console on the festival. The day before the event, lighting designer Alexey Zhuravlev patched the rig on a Martin M2GO console, which allowed him to minimize prep time on site. Amazingly, he began programming at 9:00 pm on the eve of the show.

Zhuravlev shares his impressions: “By midnight I was almost done and was surprised that it took me only three hours to program such a huge number of fixtures. The programming process went fast and easy. Without a doubt, I could not have done that with other consoles.”

He continues, “When I decided to use the M6 on Europa Plus Live, I wanted a tool that could solve all the difficulties that arise during such an intense programming process. I needed a controller that allowed me to effectively lay out the effects and work with all the processes more operatively. The M6 met my needs completely. I really like the way of ‘grouping tools,’ as well as the built-in effects generator; both of them helped a lot.

“I know the most popular consoles on the market very well, and I can program everything with them, but the M-Series controllers are definitely my choice because of the level of comfort and the possibility to solve tasks in the easiest way. Everything is subordinate to logic - when you want to do something you just do it logically and see the end result!”

Zhuravlev also had praise for the console’s well-thought-out structure of features such as faders, padding buttons and especially the console’s sunlight-readable BriteTouch screens.

“Previously, while working on some day events with other consoles, I would have to create different sun shades in order to see the screen normally,” he says. “But with the M6’s screens, I could see all the information on screen in spite of it being a bright summer day!”

The younger brother to the M6 in Martin’s M-Series, the compact M2GO, was an additional console used on the festival. Alexey Sokolov, Euroshow video engineer and assistant to Alexey Zhuravlev, had never worked with an M-Series console before but found it took only five minutes to understand its structure and begin programming.

“Alexey learned the console really fast”, says Zhuravlev. “It was comfortable for him and easy to get acquainted with. Even though we postponed the largest part of programming until the morning of the event, he wasn’t confused at all. We were absolutely calm while doing our work and he worked easily with the M2GO during the performances.”

As the festival took place during daylight hours and it was therefore not possible to use many of the traditional concert lighting tricks, Zhuravlev played not with light and effects but with their sources, which became an integral aspect of the visual design.

Another creative design element was several MAC 101 “chandeliers,” clusters of 16 of the compact LED fixtures on special metal constructions and used to highlight key points of the show.

When bright beam effects were needed, Zhuravlev chose powerful 1000 W MAC Viper Profiles. He says: “To work an outdoor event during the day is always difficult because natural daylight interferes. In order to put our ideas into reality we chose the Viper, which is perhaps the brightest spot available on the market today. Besides the high-quality colors that look good even in daylight, I like the quality of the white light which I used to illuminate the faces of the artists.”

Zhuravlev concludes, “I am very satisfied with the result of our teamwork and how the lighting rig performed. We managed to produce a show of high standard that impressed the guests and TV viewers alike. As for me, the special gratitude we received from the festival producers is a special reason to be proud. They gave it an excellent grade and rated it the best of the four festivals so far. And what’s more, they especially praised the lighting design!”