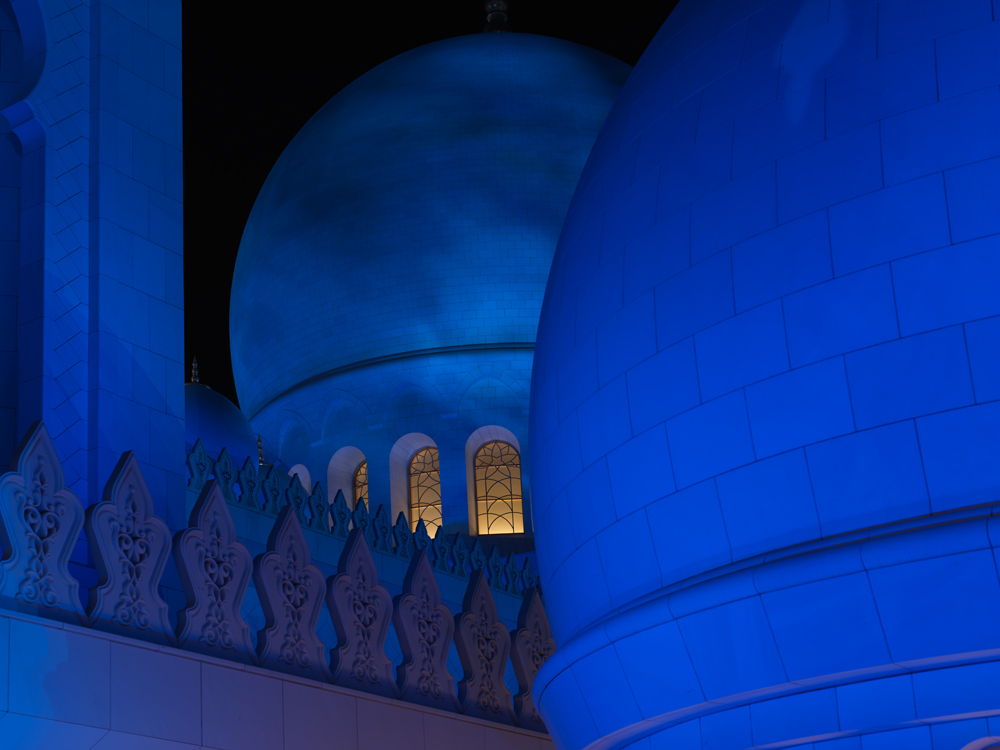 The Sheikh Zayed bin Sultan Al Nayhan Mosque (Grand Mosque) in Abu Dhabi is nothing short of extraordinary. A major national religious building, it was built for the people of Abu Dhabi as a monument to their beloved ruler and principal United Arab Emirates architect, Sheikh Zayed, who passed away before the building was completed.

The Grand Mosque is exceptional and imposing in every respect. Clad in marble and gold mosaic with each of four minarets rising to a height of 107 meters, with an 80 meter tall main dome, the more than 22,000 m2 building is the third largest mosque in the world and already one of the world’s landmark religious structures, accommodating over 30,000 worshippers.

“The building exhibits a high level of religious refinement yet is also of civic importance,” says SaMA Director Keith Bradshaw. “It sits up on a plateau against the sky with nothing on the same scale around it which gives it something very extraordinary.”

The building’s evening presence was very important to the client and in keeping with the significance of the project more than a simple floodlighting solution was sought. “The approach we took was to link the external lighting concept to the lunar cycle, the lunar cycle being what sets the Islamic calendar,” Bradshaw explains. “The building represents the cycle of the moon and mimics the appearance of the moon.”

“It’s an artistic idea rather than just an illumination,” states SaMA Director Jonathan Speirs. “We wanted to tell a story that spoke about dignity and respect and had a reference to the functionality of the building.”

Finding a fixture
Exterior lighting challenges were as large as the building itself. SaMA considered the type of equipment necessary to fulfill the ambitious lighting scheme and first looked into big projectors. “We were sure we were going to do something with a limited use of color but not full color mixing,” states Bradshaw. “While we were still working out what tones of color and what type of projection we wanted, we thought we’d get some Martin theatre kit down there and eventually did a large scale mock up that was really well organized by Martin Middle East personnel using MAC 2000s.

“We learned a lot about the projection, the intensity, the texture we wanted to use and ultimately came back with an idea of the clouds moving across the moon, streaming in a west to east direction from Mecca.”

Essentially, the look SaMA wanted was a MAC 2000 effect in regards to both power and projection and talks began about putting a MAC 2000 in a weatherproof housing. But because of the environment and excessive heat, that wasn’t the optimal choice.

Martin/SaMA cooperation
SaMA was looking for a robust exterior fixture capable of projection and animation and, not coincidentally, a large Exterior series fixture with a 1200 W lamp was on top of Martin’s priority list.
Working with SaMA, Martin developed the required specification for the project, taking into account experiences gained from two initial Exterior 1200 projects.

“The Grand Mosque project became the reason to take the idea forward,” states Jesper Lauridsen, Design & Application Manager at Martin’s headquarter office in Aarhus, Denmark. “Working closely with SaMA to understand what they required, we translated their idea and vision into an actual lighting solution, ensuring that the product could do the job. I believe our leading position in merging technology into the requirements of the architectural market was an important factor for them.”

With a high level of technology integration as well as the maintenance requirements of a project of this magnitude, Martin’s experience, support and international presence was vital. Grand Mosque representatives, including the main engineer, electrical manager and head of electrical engineering, visited Martin’s headquarter office and main factory in Denmark and came away confident that Martin could handle such a large project.

The Martin Middle East service and technical support team played a critical role throughout the project’s duration. They were involved from the beginning phases including initial reception and quality control of the Martin gear, management of the extensive installation phase, focusing, troubleshooting and all manner of on site technical support. Martin Middle East also handled commissioning to ensure the system was integrated and operating properly.

Nour Assafiri, CEO of Martin Middle East who has successfully served as the company’s Middle East representative since 1992, acted as an important intermediary and coordinator, facilitating the many aspects and parties involved (product development, manufacturing, client, contractor, designers, local officials) in order to expedite the processes and make things run more smoothly.

Exterior 1200 Image Projector
The Exterior 1200’s brightness, color, animation wheel, reliability and reporting system were all key components of its specification. “We looked out there in the market and there was nothing like the Exterior 1200,” Bradshaw states. “There are a number of large scale color washes, but none which met our specification. We worked very closely with Martin on the product development end until we ended up with what we have now which does everything we wanted. No other product in the world is capable of giving this result. It’s a unique product.”

Martin still had to go through an extraordinary process of approval and testing, showing that every component of the Exterior 1200 could cope with an ambient temperature of plus 60 degrees Celsius. Bradshaw explains: “Most often when we do performance specifications for jobs in the desert we talk about operation for an hour at a temperature of plus 45 degrees. You have to show that there is no degradation on the components of the fixture at that temperature. Martin had layers of engineers on this and in the end it was a specification so good we knew it would never be beaten. Everything they threw at it the Martin guys proved it could cope with it. It was a very live process. Even the way the components work inside – they come in and out like a filing cabinet - it’s very maintenance friendly.”
With over 1200 Martin products on the project, SaMA was also looking for luminaires that had a feedback management system to facilitate maintenance across the building. “The importance of the fault reporting system for us was critical,” Speirs says. “The reporting process to help the maintenance team was important to make sure the building looks good every night without relying on considerable numbers of people crawling over the building every evening making sure that everything works properly. We wanted to have the confidence that this building would look as good as it does now for years in the future without having an army of people looking after it.”

The improved data communication of RDM systems give several benefits most notably faster, more efficient service and a reduction in repairs and downtime resulting in substantial savings in time and costs.

“We certainly see a future for the RDM system around the world because if it helps to make sure that buildings are maintained well then it means that the investment from our clients in terms of the lighting component of their buildings is returned back sensibly,” says Speirs.

Trial run
In 2007, a full scale mock up using the Exterior 1200 and ETC control system was conducted in which the fixtures ran for several days. “We learned a lot,” Bradshaw states. “It’s all very well to come up with a simple idea for a cloud animation across a building, but because it’s such a three dimensional building, to get the real effect of that to work close and far away was very tough.”

Layers of lighting
One of the many challenges was to create well balanced architectural lighting with good emphasis, good reveal of the texture, and integrated details on such a large scale. All facades, domes and minarets are lit in layers of projection with Martin Exterior 600s and 200s doing the close in work while the Exterior 1200s color from further back.

The illumination consists of two layers of lighting, the first layer building mounted to light the lower dome areas and surfaces. The bases of all the domes are lit by a ring of Martin Exterior 200s with Martin Inground 200s at the base of some of the facades to wash light on the lower portions. Exterior 200s and a variant of the Exterior 600 light many of the vertical surfaces – the external face of the main prayer hall for example.

The second layer involves Exterior 1200s set back from the building and mounted on 22 ‘totems’ - glass reinforced concrete and steel towers - all around the building. Each totem is 17 meters tall with up to 13 Exterior 1200s. The first 2 ½ meters consists of an ETC air conditioned control rack. On top of that are the Exterior 1200s vertically stacked. There are fans inside the totems to help dissipate heat.

“We were involved in the design of the totems as far as how to make them look appropriate,” Bradshaw explains. “They are quite large but when you put them against the building not only do they fit in with the design but the scale is appropriate.” Speirs and Major strove to hide all the luminaires used on the building but the scale of the project did not always make that possible.

Animation and color
The 360 degree lighting scheme is designed to connect visitors to the lunar cycle, the building becoming as varied, life like and animated as the moon itself. Projected shadows of clouds and variations of light intensity add to a strong sense of the moon, connecting the building to the moon, the earth to the sky.

The Exterior 1200s project images of clouds at variable speeds in an animation that clears across the building from west to east from the direction of Mecca. Cloud shadows animate subtly across the main prayer hall, over and down the domes, and along the inner face of the building.

“A cloud is a non-linear thing and when you come up with this simple idea of a cloud it sounds great,” Bradshaw says, “but to actually make it look like a cloud and get the scale correct, it was a real tough one. We’re basically lighting every surface with multiple projections into the big domed areas, and the layering of the cloud texture is fantastic. It’s a standard gobo effect, but when we use it layered up it looks exactly as we wanted. One thing we noticed, when you’re close to the building the sense of animation is quicker than when you’re a few kilometers away. The scale of the animation speed changes.”

Sensitivity as far as the choice of and use of color was paramount, SaMA carefully choosing the exact shades of blue to use. The color shades had to be run by the local religious authorities to be sure they were happy with the selection. “We felt the blue coloration was a poetic way of changing from white to black without ending up with a dark building,” Speirs says.

Magical Mosque
Although it is very much an animated project, the cloud animation runs very slowly. “The whole point of the lighting isn’t to say ‘look how clever we can be with the lighting’ – it’s meant to be fairly magical. It’s the same with the interior, it’s a magical experience and because the scale is so vast it’s quite an affecting experience. It’s been quite incredible to be part of it,” Bradshaw concludes.

Speirs and Major Associates have won numerous international accolades for the illumination of the Sheikh Zayed bin Sultan Al Nahyan Mosque including an IALD Award of Merit, IES Award of Excellence, and two Middle East Lighting Design Awards (MELDA) for Project of the Year and Best Public Building Lighting Project.