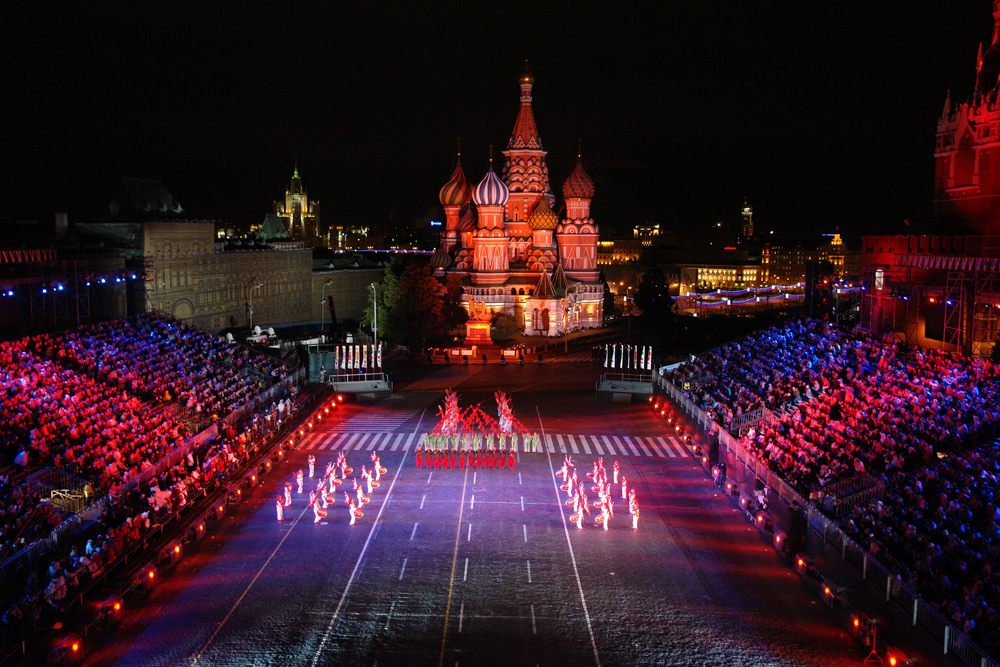 In early September, when Moscow celebrates its birthday, the traditional International Military Music Festival, “Spasskaya Tower,” takes place on Red Square. This year the event was punctuated by an honorary salute of Martin dynamic color.

The grand event is a parade featuring the Russian State Honor Guard, as well as leading Russian and foreign military music bands, an important intercultural event that attracts a huge TV and Internet audience. Among the musical military units participating in 2011 were bands from Great Britain, China, Jordan, Norway, Pakistan and Mexico among other countries.

“Sergey was ‘hand in glove’ with the French designer,” project manager at Pro Light Service, Alexander Kolotilov, comments. “First he attended several try outs, watched the show and recorded the scene sequence. After that he created a lighting scenario that was a logical extension of the main theme.” The lighting designers controlled the event from separate consoles yet acted simultaneously in close connection with TV operators.

William Hamadache directs MACs on Red Square
The “Spasskaya Tower” event was simple from a technical point of view but extensive nonetheless. Lightmaster delivered 66 MAC 2000 Washes™, 40 of which were installed between the tribunes and used to project original effects when the military units marched on Red Square. The parade lighting also emphasized the colors of the various nations involved. Additionally, 16 MAC 2000 Washes were placed in front of St. Basil’s Cathedral and 10 fixtures behind the tribunes.

Dawn to dusk with MAC 2000 Wash and MAC III Performance
“Spasskaya Tower” is also a major television broadcast therefore both LDs took into account the requirements of TV directors when choosing lighting equipment. The main stage required bright, high-quality lighting in the morning and powerful MAC 2000 Washes stepped in to effectively meet the challenge. When the official ceremony was over the fixtures continued their work at a special celebration concert.

In the evening, during the main event, 82 MAC 2000 Washes, 8 MAC III Profiles and 8 MAC III Performances installed behind the tribunes on trusses and fixed on special Layher towers were used for back light with some providing front light onto the opposite tribunes. Industry-veteran MAC 600 wash lights from Pro Light Service were also employed to provide lighting effects on a separate stage where the master of ceremony announced the participants.

“We have been working with Martin fixtures for a long time and we are really satisfied with them, says Alexander Kolotilov. “We chose the MAC III for the Spasskaya Tower Festival as we needed extremely bright moving heads. Imagine - we had to cover the vast territory of Red Square with light and throw beams from one end to the other. We were really happy with the result. We did not have any problems with fixtures during the installation or the events. The only challenging thing for us was that the equipment was operating outdoors so to protect them we had to place them under special covers.”

Lightmaster
Lightmaster was founded in 1980. Today the company offers a full spectrum of different service for entertainment events: rent of stages, podiums, fog machines and sound equipment. But our specialty is about lighting shows. Lightmaster can provide any kind of theatrical or concert lighting, any effects using modern lighting equipment. We always pay special attention to our customers’ demands and requirements and offer the most suitable solutions: lighting equipment for disco or a concert, theatre play or open air show. Lightmaster is one of the leaders in the rental market thanks to the long time experience and high quality projects. http://www.lightmaster.ru/)

Pro Light Service
In 1995 a creative team with a vast experience in lighting concerts, discos, TV studios founded Pro Light Service Company. The company’s rental park offers fixtures of the leading world brands and in-house developments as well. The solid base allows us to offer a high level service to our customers. A professional team and long-term cooperation with leading logistic companies guarantee accuracy in the questions of equipment delivery and installation all over Russia. We have a group of industrial climbers who can hang up any construction you need. (http://www.prolight.ru/)